Keramon is a Rookie Level Digimon that kind of looks like a lavender bug-like creature. He has green eyes, two main hands, and about twelve tentacles.

Neon Hanamura, a popular Pop Singer, secretly had a Digimon named Keramon to help him distribute his songs around the world and be the one on top illegally. Keramon was used to manipulate the data in the pop charts. This caused Neon to become more famous than the other Pop Singers, and was the true reason why Yoshi decided to date Neon. Yoshi tries to tell Neon that he’s a fraud, she and Lalamon get attacked by Keramon. Marcus, Thomas, Gaomon, and Agumon arrived on the scene to confront Neon and Keramon. A photographer showed up an inadvertently blew Neon’s cover, forcing Keramon to Digivolve to Chrysalimon. Chrysalimon easily defeats Gaogamon, and Agumon Digivolves to GeoGreymon and defeats Chrysalimon by impaling him with his Mega Burst attack, reverting him back into a Digi-Egg, ending his data manipulation for good. 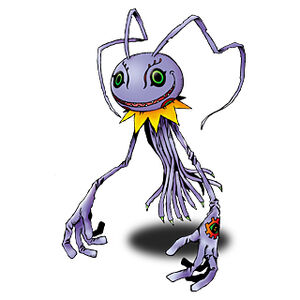