Kerbero Gangan is a wolf-themed Gangler Monster and is the main antagonist in episode 34 of the 2018 TV series Kaitou Sentai Lupinranger VS Keisatsu Sentai Patranger. He is also equipped with a Moai Facial Image called Ces murs.

Kerbeo Gangan's head is purple with yellow hair wearing a red hat, his left shoulder is a wolf tail and the right shoulder is a wolf skull, his arms body and shoulders make a full grey wolf, his Gangler safe was under the wolf, his left leg is brown and his right leg is yellow, his weapon the Kerther P-38 is a grey gold and brown three-barreled handgun.

Kerbero Gangan made his first appearance when he had destroyed part of a museum that hold the exhibit for Unique Gun Collection however on his way to next location to steal another gun he was then stopped by the arrival of the police, so he battles them. However during the shootout he used the treasure's ability to create a wall to protect him from shots by other gun wielders especially the police.

This gives him plenty time to use his ability as he opened fire on the beams that are right above the police causing it crash down onto them however they manage to dodge. After the dog skull on his shoulder began to smell another firearm in that direction so he left the scene in order to follow the scent of a firearm.

A while later Kerbero appeared at the entrance of Arsene's hideout where it holds the Lupin Magnum however he was knocked away when the Lupinrangers, Good Striker and Noel were escaping the collapsing hideout. However when he asked them to hand the "cutie" they well battle him instead. A couple of Pordermen tried to help Kerbero in the fight, but they were being hold back by Lupin Blue, Lupin Yellow and Noel.

However when he used the treasure's ability to give him some cover fire from Lupin Red, but the walls were no match for Lupin Magnum onslaught because it will be instantly destroyed during the battle Lupin Blue pinned Kerbero down to ground as he gain access to his safe (which his password is 1-0-1) and got Ces murs (which translate as "These walls") Maoi Facial Image. After that he was then taken out by the gun wielding Lupin Red.

However thanks to Goche Ru Medou he is then enlarged and battle the two bots. After that he was then destroyed by this finisher called Trickster Big Strike. 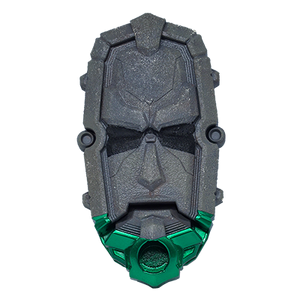