Evil Creation
Kerberos is an artificial Category Ace Undead created by Hiroshi Tennoji to assist in his goal of using the Battle Fight to achieve his dream of creating a new world order and a major antagonist in Kamen Rider Blade.

Kerberos was created from the DNA of all 53 Undead as the fifth Ace stronger than the Black Joker that Hiroshi Tennoji intended to be the victor of the Battle Fight he set up. Upon being created from the Stone of Sealing, Kerberos killed Tennoji's entire staff. Kerberos absorbed the decks of Chalice and Leangle, as well as Garren's Jack and Queen cards. The artificial Undead later fought Kamen Rider Blade King Form and was defeated by Blade's Royal Straight Flush.

However, this was all part of Tennoji's plan. After its defeat, Tennoji sealed Kerberos into the Change Kerberos card and used a device similar to the Rider System to fuse with the Artificial Undead and become Kerberos II. With his immense power, In a tough battle, Tennoji/Kerberos II fought all four Riders and was defeated by Blade King Form's Royal Straight Flush and Wild Chalice's Wild Cyclone separating the fusion. Tennoji was then killed by the Giraffa Undead, who takes the Change Kerberos for himself before departing.

Giraffa attempted to use the card to seal other Undead against Chalice, but Blade jumped in the way and it absorbed all of the Spade Suit cards instead. Giraffa later tried to steal Garren's cards using the same tactic, but Garren instead sealed him. While Kerberos's card wasn't directly seen being retrieved, it presumably was.

In an alternate future, Kamen Rider Glaive used the Change Kerberos as his Ace card. Two copies of the card were also used to create Kamen Riders Lance and L'arc.

In an alternate timeline where Shocker conquered the world thanks to the Shocker Greeed, Kerberos represented the Undead in the Shocker Council formed from the alliance of the various Kaijin races that joined up with Shocker. 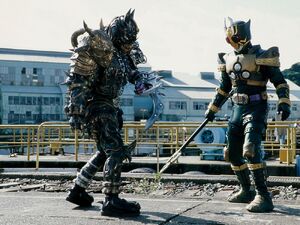 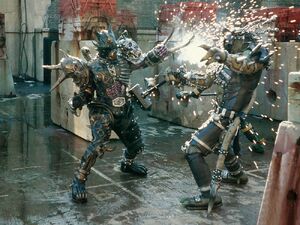 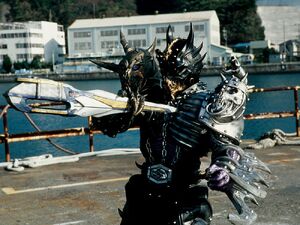 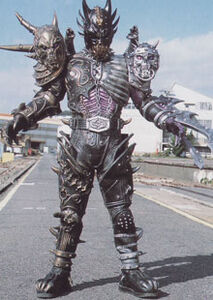