Mercenary of the French Army

Kesegowaase was a Native American member of the Colonial Assassins of the Assassin's Creed, operating in North America during the Seven Years' War.

Originally a mercenary, Kesegowaase joined the Assassins when tensions arose between the English and his people. He is an antagonist in Assassin's Creed: Rogue acting as the main antagonist of sequence 4 and the first assassin to be killed by Shay. Standing out among his fellow Assassins Kesegowaase was a much crueler and more evil man than most, happy to commit multiple war crimes. However, the Assassins turned a blind eye to this, as he was to valuable an ally to loose.

He was voiced by Danny Blanco-Hall, who also voiced Daniel Cross in the same series, and Ike Sloan in Far Cry 3: Blood Dragon.

Born in 1730 of the Wolastoqiyik tribe, Kesegowaase grew up hunting and fishing, and later became a mercenary for the French Army. He would meet Achilles Davenport and Liam O'Brien, and the two were impressed with Kesegowaase's determination and skills, and decided to invite him into the Colonial Brotherhood.

When the Assassin Shay Cormac actions accidentally cause the destruction a city and kill thousands, due to messing with precursor technology on Achilles instructions. Shay (already questioning the Assassins hypocrisy and questionable choices) is disillusioned from the cause and after trying to reason with them over what they are doing gets him nowhere he quits the Brotherhood and steals the book detailing the location of the precursor technology, thus all of the assassins attack him. Many months later, after seeing more of the darker sides of the Assassins actions, Shay joins the Templars deciding they are better for keeping the people safe. Kesegoawaase was the first target that Shay kills. The Assassin rallies Native and French allies to win the Seven Years' War, but fails.

He proceeded to have them attack and hold the Oneide tribe hostage, out of hope of finding more precursor technology. Shay arriving saw much of the devastation he caused. Later on Shay met up with many British soldiers who had been promised safe passage back to there side if they surrendered, they did so and left, however this was a trick and instead Kesegowaase sent troops to ambush and kill the unsuspecting men, thankfully Shay managed to save them. Escaping to Shay's ship, he hurled a lit barrel of gun powder back, the blast badly scarred Kesegowasse.

Furious at this, Kesegowasse attacked and sacked the fort of Albany for revenge. Shay arrived to once again see his destruction. While running through a fort, Kesegowaase is killed by Shay, using a mounted puckle-gun. His last word, "Liam..." led Shay to realize that Liam O'Brien had burned a building that the Templar George Monro was in. Kesegowaase and Monro had both perished that day and Shay was inducted into the Order afterwards. 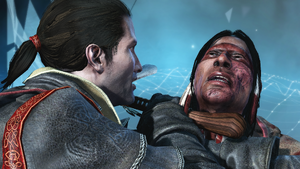 Kesegowaase's final moments, being confronted by Shay.
Add a photo to this gallery

Retrieved from "https://villains.fandom.com/wiki/Kesegowaase?oldid=4260039"
Community content is available under CC-BY-SA unless otherwise noted.