Bastard (by Sasha and Cole MacGrath)

Watching his younger self.
Drinking.

Protect his family (failed).
Accelerate the Ray Sphere's development to give Cole MacGrath and John White powers.
Release the Ray Field Plague sooner to put Empire City in quarantine.
Forge Cole into the hero he wasn't by forcing him into life-threatening situations.
Kill his wife/Cole's girlfriend, Trish Dailey, to prevent Cole choosing her over humanity.
Turn John into "The Beast" sooner to motivate Cole into fulfilling his destiny (all succeeded).
Force Cole to activate the Ray Field Inhibitor to kill all conduits on Earth (posthumously; mostly successful).

An alternate timeline version of the series' main protagonist Cole MacGrath, Kessler is a conduit, a subspecies of human capable of exhibiting powers after their gene is activated. But this requires innocent humans to die so their neuroelectric energy can fuel the conduit and activate their powers, whether the conduit is willing to or not.

After failing to save the world from and conduit called, "The Beast", Kessler traveled back in time to create a new timeline by preparing his younger self, Cole MacGrath, for the threat he'd failed to stop. Kessler's ruthless methods involved the mass murder of innocents, including Cole's girlfriend Trish Dailey, whom Kessler married in his timeline, to traumatize Cole and remold him into a hero willing to sacrifice everything for the greater good.

He was voiced by Sam A. Mowry, who also voiced Arpeggio in Sly 2: Band of Thieves.

Kessler is a future version of Cole MacGrath from an alternate timeline. While his own backstory is largely unknown it's presumed to be identical to Cole as Kessler had minimal interference with his life until the blast. This means Kessler/Cole was a bike messenger who lived in Empire City with his girlfriend Trish Dailey and best friend Zeke Dunbar. His mother was ashamed of him and told her friends Cole was a teacher rather than a bike messanger. His father highly approved of his relationship with Trish, considering her the daughter he didn't have. He also had a younger brother. Eventually Cole married Trish with Zeke as his best man and later had two daughters with her.

At some point, Cole awakened his conduit gene and gained the power of electrokinesis. It's unknown how he gained these powers without the Empire City Blast but its speculated that Cole had an encounter with Alden Tate the First Sons which brought him into contact with the Ray Sphere.

One day, an unimaginably powerful conduit, known as the Beast, emerged and began causing global destruction in a quest to awaken other conduits, though costing the lives of every non-human conduits in the process. While Cole could've used his powers to stop it, he instead chose to flee with his family and they watched as the Beast destroyed most of the world. Somehow Cole learned the Beast's identity, John White. However, the creation of the Beast also caused an outbreak that threatened the lives of everyone on Earth, with only awakened conduits being immune. This outbreak eventually resulted in the deaths of Trish and Cole's daughters and most of humanity leaving only the conduits activated by the Beast to roam a now barren Earth. Saddened and vengeful, Cole used his newest power to embark on a one-way trip back in time in an attempt to rewrite history and prepare his younger self to face the Beast and rid humanity of the conduits. Renaming himself "Kessler", he usurped Richard Tate of the First Sons, accelerated the development of the Ray Sphere, and began looking for his younger self and his friends.

As he successfully usurped the First Sons, Kessler was able to obtain complete control of the faction and its assets. With this, he later expanded the faction's reach to the city of New Marais, where he made friends with researcher Sebastian Wolfe and a part of the faction, and also Joseph Bertrand III as a business partner, giving him part of the shares. He then commissioned Dr. Wolfe to begin work on the Ray Sphere but also gave him the means to build a Ray Field Inhibitor, a device to cure the plague but at the cost of killing every conduit within it's radius which only Cole or Kessler could activate. Kessler eventually employed John White, the future Beast, into the First Sons to keep an eye on him and told him he was destined for greatness.

In later years, Kessler also formed a somewhat romantic relationship with Sasha, who was researching a sort of mind-control agent. Though their relationship would not last for long, as Sasha was later removed from the organization after having a public argument with Kessler. She swore revenge upon Kessler after she was removed. After running several tests, Dr. Wolfe was able to make the Ray Sphere partly functional. With this, Kessler had it delivered to Empire City, where he himself ran some tests with the device. He would also mention the prophecy of the Beast to several of his associates, namely, John (which he would later relay to his contacts), Bertrand and Wolfe. While Kessler was aware of John's destiny, he also started plotting the acceleration of his own creation to give Cole proper incentive to sacrifice himself and rid humanity of the conduits.

Kessler continually ran tests with the Ray Sphere, using animals and humans (one of them being David Warner) as subjects for the experiments, exposing them to the device which would either prove a minor success or a fatal failure. 4 months prior to John's recruitment, Kessler collaborated with DARPA and their agent Moya Jones, where he showcased David Warner and how his abilities have progressed. Kessler would then later keep David imprisoned below their facility. After making sure that the Ray Sphere was ready for use, Kessler had his men set up the plans for the Quarantine, as he himself made the delivery for the Ray Sphere, specifically choosing Cole MacGrath as the courier for the job. Setting the location to 19th and Sloat at the Historic District, Kessler prepares for its activation. After Cole arrives at the designated area, Kessler contacts Cole, and tells him to open the package. Though reluctant, Cole opens it, and triggers the device, which results in a catastrophic explosion. Moments after Kessler travels to the site of the blast to check on Cole and was relieved to see he'd survived and awakened his conduit gene, but expressed extreme regret for all the lives lost. Subsequently, Moya and several soldiers attempted to arrest Kessler. Kessler killed the soldiers and told Moya of John White and his possession of the Ray Sphere. While she left to look for John she vowed Kessler wouldn't leave the city alive though Kessler admitted he hadn't planned to.

In the following weeks the city was placed under quarantine and the First Sons seized control of Historic District while Sasha and Alden Tate, who'd also awakened their conduit genes, took control of the other districts with their gangs the Reapers and Dust Men. Kessler monitored Cole's progress and made the necessary arrangements to ensure that he was ready to confront the Beast as he looked for John and the Ray Sphere while battling the Reapers, Dust Men and trying to escape Moya.

Both Cole and Kessler then met each other for the first time when Cole destroys the tar machines created by Sasha. Just then, the latter grabs his head, showing him visions of his future leading Cole to believe Kessler is responsible for all of it. Throughout the game, Kessler contacts Cole via his mobile, throwing taunts and explaining his philosphy to the Conduit, inentionally adding fuel to Cole's rage.

Later, Kessler gets into a fight with Alden and convinces Zeke into joining him so that he could fix the Ray Sphere. Afterwards, both later retreated to the Historic District, where he rallied all of his men. Kessler then kept Zeke within a cell, occasionally visiting him whenever he was intoxicated (so when they talked to each other, Zeke won't aware that he is his best friend's future self). After Cole dealt with Alden and made his way to the Historic District, he immediately alarmed Cole regarding Trish, whom he kidnapped. Kessler threatens to kill her if he fails to rescue the civilians. After rescuing a series of civilians held hostage, Kessler presented Cole with a difficult choice; he has placed bombs all over the Historic District and kidnaps Cole's girlfriend Trish, thus forcing him to decide whether to save her or six doctors that could save many other live. Either way, Trish is killed, being among the doctors if Cole chooses to save her.

After Cole destroys the Ray Sphere or activates it, Kessler calls him to meet him in the wreckage where he activated the device. He then challenge Cole to meet him in the Ground Zero, challenge which Cole accepts. Right before he faced his past self, Kessler also visited the cell of Zeke for the last time, saying goodbye and thanking him for being a good friend. Afterwards, Kessler meet Cole at the center of the Ray Sphere blast. It is revealed he is there when it went off. While fighting, Zeke, whom unexpectedly escape, attempts to fight him, but Kessler throws him away. Nevertheless, Cole triumphs and mortally wounds Kessler with a powerful Lightning Storm.

Just then, Cole hears him whispering "Trish, I love you. Please forgive me". Kessler grabs into Cole's head, revealing more of his secrets. It is revealed that he is actually Cole, from a future where he married Trish and Zeke was his best man. But a gigantic monster, "The Beast", began slaughtering countless people, and although Kessler would have been capable of stopping it he choose to flee with family instead, only for them to die. In an effort to ensure the doomed future wouldn't exist, Cole obtained the power to travel back in time. All that Kessler did was to turn Cole into the savior he failed to be, even if he had to kill Trish, the woman they both loved, to ensure that Cole wouldn't make the same mistake as him and so that when Cole faced The Beast he would capable of making impossible decisions. Kessler falls dead afterwards and Cole declares his hatred for him. Nevertheless, Cole even states that when the Beast comes, he will be ready.

Kessler mourning the lost of his family.

Kessler going back in time to correct the mistakes he made. 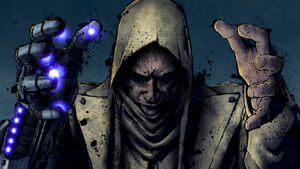 Kessler dropping Cole after showing him the Soon-To-Be Dark Future before believing him to be the cause of the catastrophe. 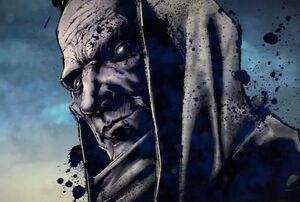 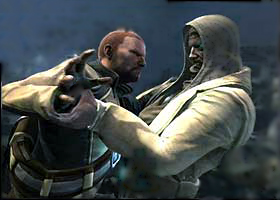 Cole fighting Kessler at Ground Zero in the 1st inFamous. 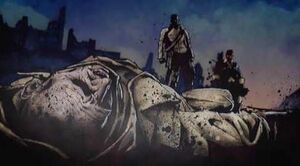 Kessler's death, his corpse being looked upon Cole and Zeke. 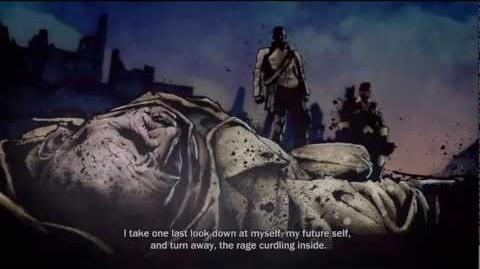