Kill and eat as many prostitutes as possible (eventually failed).

Kevin is the main antagonist in the Sin City story The Hard Goodbye, and a supporting antagonist of the 2005 film Sin City. He is a cannibalistic serial killer with superhuman fighting skills and agility but the appearance of an unassuming farm-boy. He never speaks or shows any emotion.

In the 2005 Sin City film, he is portrayed by Elijah Wood, who also portrayed Frank Zito in Maniac and voiced Sigma in Red vs. Blue.

Kevin was a young man who took pleasure in kidnapping and cannibalizing prostitutes. At one point he confesses his crimes to Cardinal Patrick Henry Roark, supposedly out of guilt-claiming that eating them filled him with white light. The cardinal approved of Kevin's actions and had been helping him continue his killings ever since, and letting Kevin live with him on his farm.

Lately, Kevin had been murdering several girls from the "Old Town" prostitute circle, through connections provided by Roark, and murdered Goldie, who was one of the leaders of Old Town, because she was becoming suspicious of them after all the disappearances. At the start of the story, he kills Goldie, causing the main character who had fallen in love with her, Marv, to set out on a violent investigation to find the culprit.

When Marv finally locates the farm where Kevin and Cardinal Roark live, Kevin ambushes him and knocks him out. Marv wakes up in a cell under the farmhouse, where he sees the heads of Kevin's victims mounted on the wall and finds out that he is a cannibal. He also finds his parole officer, Lucille, whom Kevin had eaten the fingers off of and made her watch as he ate the other victims. He escapes, while Lucille is killed by the corrupted authorities, and he is later attacked by Goldie's identical sister Wendy, who thinks he killed her sister. Marv explains who the true killer is, and they go back to the farm together to finish Kevin off. Marv subdues Kevin and then cuts his limbs off, has Kevin's pet wolf eat his insides, and finally decapitates him. Kevin never makes a sound even during his own excruciating death, and keeps a blank expression even after his head has been taken off. After that, Marv goes into the farmhouse and kills Cardinal Roark in a similarly brutal manner.

Kevin is a remorseless psychopath who likes to torture, murder and defile prostitutes to satisfy his sadistic urges. He's characterized by his complete lack of emotion, which only makes him a scarier and more ruthless monster. The only person he ever spoke to was Roark - though the Cardinal likely imagined his voice as he's mentally unwell. Despite the cardinal's claims that he only killed "whores", Kevin showed no regret in subjecting Lucille, a cop, to the same tortures, biting off her fingers and forcing her to watch as he ate his other victims.

Whether he really felt any guilt for having murdered them in the past when he confessed to Roark or was simply manipulating him for his own means, any of that guilt he may have felt was gone when he realized he could get away with his crimes through the cardinal.

Kevin was also completely fearless, as he was a formidable fighter against his enemies and could take down the 7 foot tall Marv with ease. 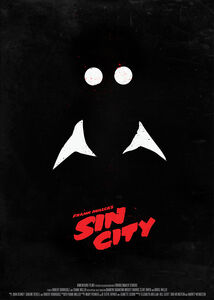 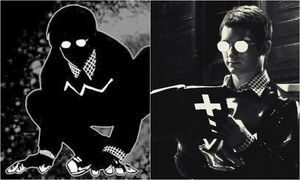 Kevin in the comic and the movie. 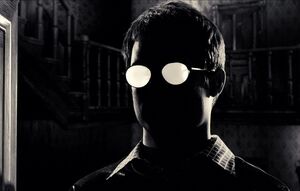 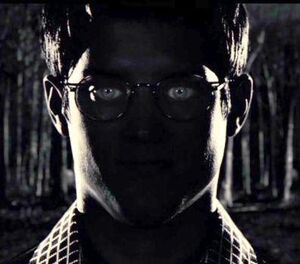 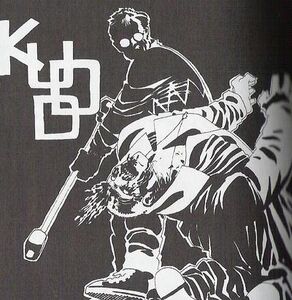 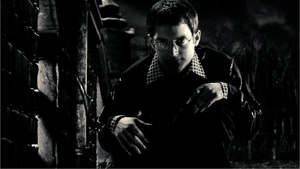 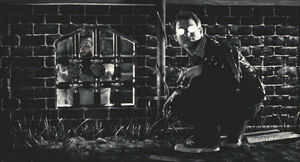 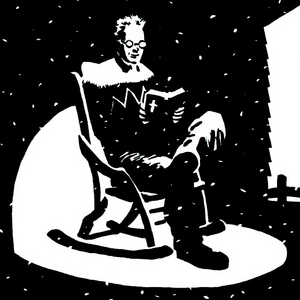 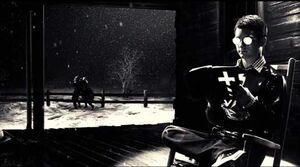 Kevin is knocked out by Marv. 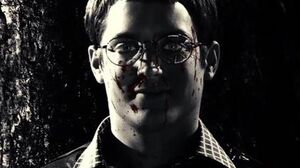 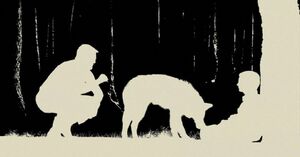 Kevin being eaten by a wolf. 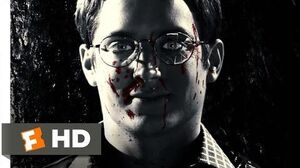