Absorb the abilities of all the aliens in the Null Void to become as powerful as possible.

Kevin 11,000 is a possible future version of Kevin Levin in the TV show Ben 10. He serves as the main antagonist in the episode "Ken 10".

He is voiced by Charlie Schlatter, with Greg Cipes taking the role in Ben 10: Omniverse.

In the future, Kevin is more insane than ever and more powerful than ever. His determination to be better than Ben Tennyson has made him more crazy. He goes so far as to trick his own son, so he can prove that he is the best.

By the events of Omniverse, however, his sanity has been fully restored and became friends with Ben and his allies once more. He behaves much like how he used to in his younger days but on more good terms with others this time around.

In the future, Kevin has been trapped in the Null Void for over a decade. While he was there, Kevin had been absorbing around 11,000 aliens to acquire their powers. During one of his breakouts Kevin had a relationship with nameless woman and had a son named Devlin. He tricked his own son into believing that he's reformed and that he want to "Spend some quality time with his son," and that all he had to do was to find and open the Null Void Projector.

After Devlin tricked Ken Tennyson into showing him where the Null Void Projector was, Devlin opened the projector, releasing Kevin. When Ben found out, Kevin showed his true form. Kevin proved to be more than a match for both Ben, and Ken. When Devlin found out that he was tricked by his own father, Devlin decided to team up with the Tennyson and fight his father. When Ben witness Kevin beating up Ken and knocking him unconscious, he transforms into Way Big and beats up Kevin to, presumably, near death. When Ben and Ken walked away, Kevin got back up, proclaiming that, that was nothing. Eventually Ken manage to toss a Null Void Bomb right underneath Kevin, trapping Kevin inside the bomb, and presumably sending him back to the Null Void.

A few years later, Kevin has been cured and regained his sanity once again. He is Ben 10,000's friend and Gwendolyn Tennyson's boyfriend again, although Gwendolyn keeps a close eye on him and immediately raises her voice when Kevin starts to speak aggressively. Kevin now works for the Plumbers in the Null Void to keep the likes of the Rooters at bay. He was also able to attend Grandpa Max's Retirement Party and Rook's coronation. 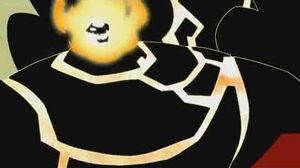