Avenge Laura, by killing his track team and framing his coach (succeeded in killing, but failed in the framing of Coach Michaels.).

Kevin Badger is the main antagonist of the 1981 slasher film Graduation Day. He was a track runner for Midvale High School, along with his girlfriend Laura Ramstead. One day, after running a 200 meter dash, Laura dies. Devastated at the loss of his girlfriend, Kevin put the blame on the rest of the team, who he felt had pressured Laura into overexerting herself. Two months after her death, Kevin goes after the team in his fencing gear and tries to frame the coach for the murders.

He was portrayed by E. Danny Murphy.

Kevin and his girlfriend were both apart of Midvale High School's athletic team, and after graduation were planning to get married. However, after winning a 200 meter dash, Laura died, having suffered a blood clot. Losing his girlfriend and future wife, Kevin's sanity was shattered. Believing that Coach Michaels and the rest of the team were responsible for her death, the week of graduation, Kevin dressed in his fencing gear and went after the team, killing them one by one in each thirty seconds, as that was how long it took Laura to win the race and die.

After killing off the track team, Kevin framed Coach Michaels for the murders, even resulting in the coach being shot by Inspector Halliday. However, Laura's sister discovers the truth when she goes to pick up Laura's trophies from Kevin's house and finds Laura's corpse dressed in a graduation gown. Kevin admits that he "set everyone straight" and tells Anne that he still intends to marry Laura. Seeing that Kevin is delusional, Anne slowly backs away, but Kevin mistakes this behavior and believes that Anne never loved Laura, trying to kill her as well. A fight and chase ensues, ending when Anne manages to push Kevin into the same spikes that Pete was impaled on. 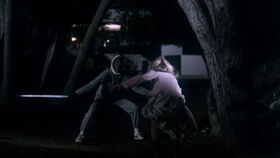 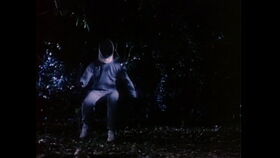 Kevin chases after Dolores.
Add a photo to this gallery

Retrieved from "https://villains.fandom.com/wiki/Kevin_Badger?oldid=4037015"
Community content is available under CC-BY-SA unless otherwise noted.