Leader of the Jellyspotters (formerly)

Being famous for being the leader of the Jellyspotters.

Catching jellyfish with his teammates.
Calling SpongeBob a loser.

Use his fans as "guests" for the Jellyspotter's jellyfishing expedition to throw them into a crevasse in Jelly Fish Fields (succeeded until SpongeBob learned the truth and turns against him).

Kevin C. Cucumber is the leader of the Jellyspotters and the main antagonist of the SpongeBob SquarePants episode "I'm Your Biggest Fanatic". He also appears in the videogame "Lights, Camera, Pants".

Kevin C. Cucumber is a light green sea cucumber stylized to look like an actual cucumber and has a crown that is pale yellow with an orange outline attached to his head. He wears blue glasses along with brown colored shorts and has pink lips.

Good Side and True Nature

Kevin C. Cucumber was speaking at a jellyfishing convention, in which SpongeBob and Patrick attended. SpongeBob was a big fan of him, and would do anything Kevin told him to do. He is ill-tempered, cranky, power-hungry, arrogant, sadistic, selfish, treacherous, calculating, cold and ruthless.

One day, he invited SpongeBob to go jellyfishing with him and the Jelly Spotters. He tricked SpongeBob into thinking he could join their club if he passed certain tests, simply so that he could humiliate and belittle him. This seems to be a habit of his, as many of his biggest fans have ended up stranded in a crevasse at Jelly Fish Fields because of him.

However, all of Kevin's plans ended up with him getting stung by jellyfish one too many times, causing his hatred for SpongeBob to grow. Finally, he snapped and said SpongeBob was ready for the final test: use SpongeBob as live bait to catch a queen jellyfish.

It was revealed the Jelly Spotters were using a robot queen jellyfish they piloted. Kevin and his friends then taunted and made fun of SpongeBob so badly by calling him a "loser", but before he could deliver the final humiliation, however, the king jellyfish appears and fell in love with the robotic queen and causing it to crash. Of course, this resulted in the king jellyfish to be angry and attacked, causing Jelly Spotters and SpongeBob to flee into a nearby cave. At this point, Kevin proved to be a coward and admitted that he was only in the club for the fashion, which were just his shorts.

When SpongeBob managed to ward away the king jellyfish, Kevin was ruined when the Jelly Spotters ripped off his crown-like cranium and put it on SpongeBob. Although SpongeBob left the club, it's unlikely Kevin retained leadership of the club, as he lost the loyalty of his teammates.

After being absent in the show for 18 years, Kevin makes a cameo appearance in the season 12 episode "Jolly Rogers", where he sets up a convention during Hotel Halibut's 36th Annual Jelly-Fisher Convention. He can later be seen when he runs out of the hotel when it gets filled with gas. 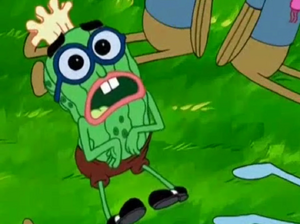 Kevin turns out to be a coward.

"Don't look at me! I was just in this for the fashion!" 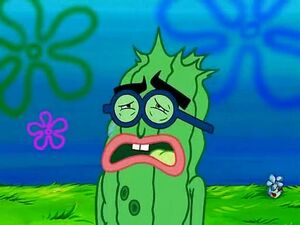 Kevin C. Cucumber's defeat.
Add a photo to this gallery

Retrieved from "https://villains.fandom.com/wiki/Kevin_C._Cucumber?oldid=3459624"
Community content is available under CC-BY-SA unless otherwise noted.