We Need to Talk about Kevin

Antagonizing and tormenting his mother.

Commit an extreme massacre at his school in order to get rid of his father and sister.

Keep tormenting his mother at all costs (both succeeded).

Kevin Khatchadourian is the titular main antagonist of the 2003 Lionel Shriver novel We Need to Talk About Kevin and its 2011 film adaptation of the same name. He is a psychopathic teenager who commits a school massacre.

He was portrayed by Ezra Miller, who would later play Credence Barebone in the Fantastic Beasts film series.

Kevin's mother, Eva, takes the role of narrator throughout the book, documenting his actions through letters towards Franklin Plaskett, Kevin's father and Eva's husband. In this letters, Eva both details her relations with her son and his descent in psychopathic misanthropy and her own demons relating to her son. Eva also visits her son in his prison cell, with their relations being of like hostile strangers.

From a young age, Kevin shown signs of hatred for his mother and desire to cause her pain, such as spraying ink on her maps and enticing a girl with eczema to rip apart her skin. With no real sense of morality and love in his heart, with the only hobby worthy of his satisfaction is archery. Meanwhile, Franklin defends Kevin as the boy slowly begins to deteriorate morally, saying explanation can be given to his actions. However, this sign is more sign of Kevin's manipulation, as he only acts the way he truly is when his father is absent. This dual nature eventually leads to both the birth of Celia out of desperation for rekindling for love and Kevin's parents divorcing one another. Kevin could also be responsible for Celia's loss of one of her eyes, either through his manipulation of her to use it to clean her eye or him attacking the child with it.

Regardless of the option, Kevin hearing the idea of the family breaking apart leads him to commit easily his worse actions, being the murder of his sister and his father for turning his murderous aggression towards his school, be this action out of a overwhelmed heart lashing out at those around it or Kevin pulling one last trick on his family to forever destroy Eva's soul.

At the second anniversary of Kevin's killings, the novel ends on shortly before Kevin's transferring to Sing Sing. Making peace with his mother and apologizing for his actions while also admitting of his answerless reply to on why he killed those, Eva at last resolves her past, at last loving her own son. Whenever this is a sign of Kevin truly feeling bad for his actions or an attempt at manipulating his mother further is unknown. 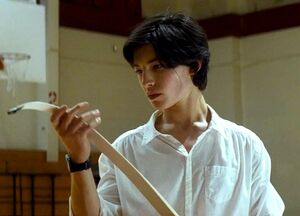 Kevin at his school, preparing himself for the massacre.

Kevin's Evil Grin.
Add a photo to this gallery
Retrieved from "https://villains.fandom.com/wiki/Kevin_Khatchadourian?oldid=4098961"
Community content is available under CC-BY-SA unless otherwise noted.