Captain Kevin Sparks is a supporting character turned secondary antagonist in the Call of Duty graphic novel Modern Warfare 2: Ghost, which serves as a prequel to the 2009 video game, Call of Duty: Modern Warfare 2. Originally a US Special Forces operative, he was captured by the drug lord Manuel Roba and brainwashed to help him smuggle terrorists and drugs in Afghanistan. Sparks and Marcus Washington would attempt to kill their former ally, Simon Riley, but would fail after they murdered his entire family.

Kevin Sparks was born in the United States to a Vietnam War veteran who bragged about his services, and would often speak of the atrocities he witnessed. Kevin was inspired by his father's military history, and enlisted into the United States Special Forces and became an operative of Delta Force. Sparks would later tell his father a made up story about how he killed a man who ate forty babies, which shocked his father so much he didn't mentioned his time in Vietnam ever again.

Sparks joined a special ops team lead by Major Vernon and consisted of Kevin's friend Marcus Washington, Special Air Services operative Simon Riley, Cumberland, and Sykes to find and eliminate drug lord Manuel Roba. Sparks and his team were betrayed by Vernon, and captured by Roba and taken to a brainwashing facility in Coahuila, Mexico. Sparks, Washington and Riley were frequently tortured by Roba and his men, being forced to spar with each other and were given psychological drugs to break them. Sparks and Washington submitted to the brainwashing process, and were allowed to escape the facility by Roba so they could return to the states. Upon returning to America, Sparks was promoted to the rank of captain, and was tasked to train Afghanistan soldiers around the end of that year. However, Sparks was still part of Roba's plan on having him smuggle terrorists and drugs in Afghanistan and possibly other parts of the globe.

Sparks was then stationed to the RAF Bonnington, and managed to locate Simon with his family, whom managed to survive being placed in a coffin with Vernon's corpse. Sparks and Riley reunited, but the latter become suspicious of the former due to him referring to Roba as an "old friend", and later attempting to rape a woman. After fleeing to Sparks' hotel room, Riley and Sparks fought each other until Washington entered and shot at Simon. Sparks and Washington then decided to kill Riley's family to break him, and succeeded in killing Riley's father, brother, sister-in-law, and nephew. Afterward, the two returned to Bonnington before they were sent to locations, but Riley managed to locate the two and kidnapped Sparks as Washington was killed in his sleep. Sparks was then tortured by Riley at his family home in Manchester, but killed him when Kevin attempted to attack Simon with a stick. After killing his former ally, Riley burned the body along with his former home, and later killed Roba in revenge. 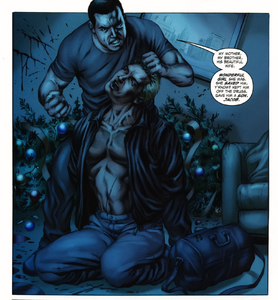 Sparks being tortured by Simon Riley.