As Kevin and his 23 personalities:

Watching naked girls dance (as Dennis).
Listening and dancing to Kanye West's music, as well as drawing (as Hedwig).

To sacrifice Casey, Marcia, and Claire to the Beast (partially succeeded; the Beast spared Casey when he discovered her "purity").

To awaken the Beast (as Dennis, Patricia, and Hedwig: succeeded).
To rid the world of the "Impure" (as the Beast: failed).
To find out who killed his father (succeeded).
To defeat and kill Elijah Price to avenge his father's death and get revenge on him for making him into who is and for what he put him through (succeeded).
To expose to world that superpowers exist (succeeded).
To escape Dr. Staple's captivity (failed)

Kevin Wendell Crumb is a recurring character of the Eastrail 177 film series. He is a mysterious man who suffers from an extreme case of Dissociative Identity Disorder (DID), and has 23 separate personalities residing in his mind. Kevin and the majority of his personalities are by no means evil, however two of the most dominant—Dennis, an obsessive, cold and tough man, and Patricia, a manipulative female—are both aggressive and vicious in their own way. Dennis and Patricia are also devout believers in a burgeoning 24th personality — "The Beast" — whom they believe will avenge them against the "Impure". He serves as the main antagonist of the 2016 film Split, and the secondary antagonist of the 2019 film Glass.

He was portrayed by James McAvoy, who also played Wesley Gibson in Wanted, Bruce Robertson in Fifth, and David Percival in Atomic Blonde.

When Kevin was a child, his father, Clarence Wendell Crumb, left on a train and never came back. Kevin's father died in the same train crash (orchestrated by the villain Elijah Price, known by his unforgettable moniker "Mr. Glass") that left David Dunn, the protagonist of Unbreakable, as the sole surviving passenger. This left 3-year-old Kevin at the mercy of his abusive mother, who would severely punish him if he did not keep everything clean and in order. To avoid his mother's abuse, Kevin began to develop multiple personalities as a defense mechanism. Dennis, the protector alter with obsessive-compulsive cleaning habits, was a direct result of his trauma.

Kevin ultimately developed 23 individual personalities, each of which are able to take control.

Kevin, presumably Dennis, worked at the Philadelphia Zoo when something jarring happened: two girls approached him and played a cruel, childish prank on him. Without warning, both girls took his hands and forced him to touch their breasts, before they ran away laughing. This left Kevin disoriented and in shambles, and possibly contributed to Dennis's peculiar sexual appetite.

As of September 18, 2014, the personalities seemed to have buried Kevin away deep in his mind. At the beginning of the film, Dennis (a stern man who suffers from OCD) kidnaps Casey, Claire and Marcia, knocking out Claire's father in order to abduct the three girls. He keeps them in a room in his home where the three girls are later introduced to Patricia (a matronly Englishwoman), another one of Kevin's alters. This bewilders and invokes fear within the girls. When Hedwig (a 9-year-old boy with a lisp) "takes the light" (control of Kevin's body), Casey tries to befriend him in hopes of escaping. Throughout the film, mainly through the discussions between Kevin's alters and his therapist, Dr. Fletcher, it is established that the presumed dominant personality is Barry (an effeminate male fashion designer) who tries to subjugate the others and keep them from staying in the light. However, two of the other personalities (Patricia and Dennis) have suppressed Barry with the help of Hedwig, who is able to take the light at his will.

When Claire tries to escape the room through the drywall ceiling, Dennis finds her and then locks her in a separate room on her own. He tells her it is not nice to trick children because it shows who someone really is. Soon after, when Patricia prepares food for Casey and Marcia, she forbids them from having Claire join them. When Marcia attacks Patricia and tries to make a run for it, Patricia finds her and threatens her with a knife. Like Claire, Marcia is put into a separate dingy room next to Claire's room.

Casey befriends Hedwig, and tries to influence him. Hedwig excitedly warns the girls about 'the Beast', a malevolent 24th personality with incredible abilities. He also reveals to Casey that there is a window in his room, which she perceives it as a potential escape route. However, when he shows her the 'window', it is shown to be a hand-drawn picture of a window.

She grabs a functional walkie-talkie nearby and radios for help, but the person on the other end thinks that it is a prank and dismisses her; Patricia then subdues Casey. Barry sends several email messages for help to Dr. Fletcher, revealed to be Barry feeling threatened by the bid for control by Dennis and Patricia. When Dr. Fletcher approaches and tries to reason with Kevin, she realises that he has kidnapped the girls and tries to convince him that what he is doing is wrong. Dennis sprays her with chloroform and carries her into the living room. Enacting a sort of ritual, Dennis then buys flowers and Patricia visits a train car (presumably the same train Kevin's father left him at.) Dennis then becomes 'the Beast', exhibiting physical changes such as increased muscle mass and several inches added to his already tall height. The Beast snarls, his persona dissolving into an animalistic mentality before launching himself on a rampage. When she recovers, Dr. Fletcher writes down Kevin's full name, knowing that the resulting awakening of his original personality will be enough to subdue him. The girls, in the meantime, try to escape from their confinements.

Returning to his hideout, “The Beast” confronts Dr. Fletcher. Before she is able to speak Kevin's full name, a tactic which would call Kevin to the light and throw the Horde into chaos, he crushes her to death against him. He then proceeds to rip apart and eat both Marcia and Claire. Meanwhile, Casey stumbles upon Dr. Fletcher's corpse, as well as an instructional note the doctor the left behind on how to defeat the Beast. When the Beast closes in on her, demonstrating the ability to climb up walls, Casey uses Kevin's real name to call him to the light. The Beast is briefly tamed, and the actual Kevin (who has been restrained for years by the other personalities, and has no memory of what he has done between then and now) emerges. Horrified by the death of Dr. Fletcher, he orders Casey to kill him with a shotgun he bought before the Beast can return—however, the Beast returns when Kevin's other personalities desperately try to defend themselves. As the Beast reawakens, it pursues Casey into the basement of its lair, eventually cornering her in a cell. Casey shoots him twice at point blank range with Kevin's shotgun, but it proves to be ineffective, as the shells fail to do more than pierce his skin.

Reaching the cell, the Beast voices his maniacal plans to rid the world of the 'untouched' (As in, the people who he feels have never suffered pain or discomfort, unlike him). The Beast bends the bars with its bare hands to gain entry, but before finishing, it notices the scars on her body from her previous abuse at the hands of her uncle. Realizing that he has met a kindred spirit, one who has also suffered exceptional abuse at the hands of a trusted relative, he declares her to be "pure," and leaves a bewildered Casey in peace. Casey is eventually discovered and rescued by Kevin's co-workers at the Philadelphia Zoo. Recovering from the battle, Patricia, Dennis and Hedwig speculate in awe at the power of the Beast, marvelling at what it was shown to be capable of doing. Kevin voices his plans to change the world, and awaits the next feeding of 'the Beast' now under the man's newest and diabolical collective nom de guerre "The Horde".

At the end of the film, in a restaurant, the people are watching the news about The Horde, one of the waitresses talks about the similarity with a case 15 years ago where a man in a wheelchair was arrested and had a nickname too which she cannot recall. A man named David Dunn sitting next to her tells her his name was Mr. Glass.

Kevin returns taking a group of cheerleaders hostage until the intervention of a superhero called the Overseer (later revealed to be David). However, both David and Kevin end up being arrested by the authorities and sent to an insane asylum where Elijah is also being held in.

The three are being held by Dr. Ellie Staple, who tries to persuade them that there is no such thing as superhuman powers and that they actually have mental illness. To ensure of Kevin's compliance, Staple has built a system of flashing lights that activate with Kevin's closeness, which opens up one personality to another.

Eventually, it turns out that Staple is part of an anti-superhuman society that is willing to refute any evidence regarding to supers and that she plans to kill Eiljah, David and Kevin to accomplish it. Being aware of Staple's intentions, Elijah forms an alliance with Kevin, who allows the former to escape while battling a freed Kevin in the institution's grounds. However, Kevin soon learns from David's son Joseph that Elijah is the one responsible for his father's death in the same train crash, resulting an angry Kevin to kill Eljiah by crushing his ribs while Staple sends over several armed men to kill David by drowning him in a pothole.

Eventually, Kevin meets his death when Casey Cooke (one of his former hostages) puts him back into the light, which subsequently erased all his separate personalities and allowed Staple's men to shoot him down. Despite Kevin's death, his actions were enough to let Elijah record the event with the security cameras before he died. Elijah's mother, Joseph and Casey would later expose the footage to the public in revenge for the deaths of Elijah, David and Kevin, thus exposing the existence of those with superhuman abilities and leaving Staple's plan in complete vain.

Kevin is an extremely impenetrable and complex individual: The mental disorder that he prominently suffers from causes him to have a myriad of personalities, though only a few of them are shown in the film:

Kevin's computer also listed 12 other personalities that were never shown before Kevin's death:

As Kevin Wendell Crumb, he is just an ordinary person with no unique abilities. The same applies to most of the other personalities. However, when The Beast takes the light, he gains frightening animal-like abilities and is presumably one of the most powerful individuals in their universe, with David Dunn being the only one who rivals him. 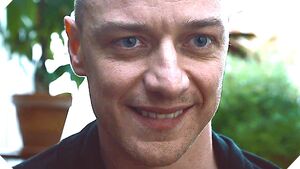 Dennis pretending to be Barry. 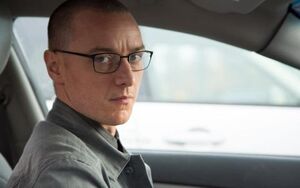 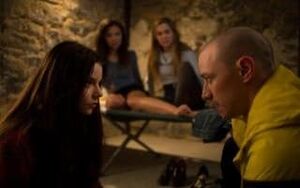 Hedwig is befriended by Casey. 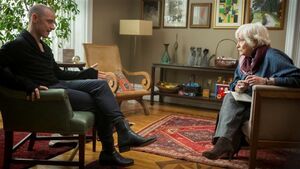 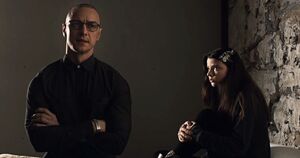 Dennis talks to Casey about the Beast. 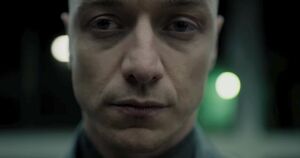 Kevin awaiting the arrival of the Beast. 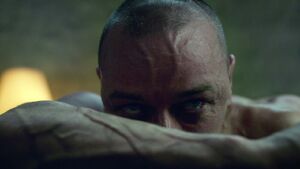 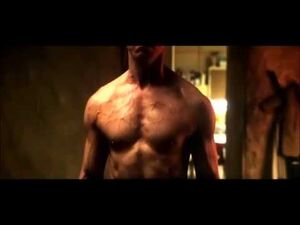 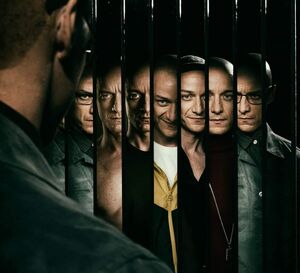 Kevin's personalities, collectively referred to as "The Horde". 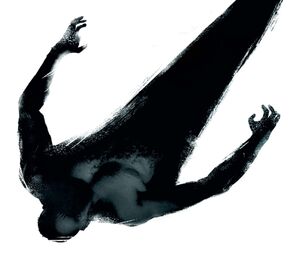 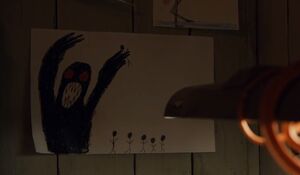 A drawing of the Beast by Hedwig.

Another scribble drawing of the Beast. 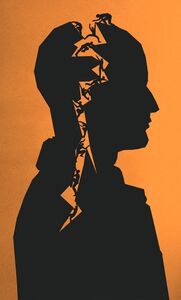 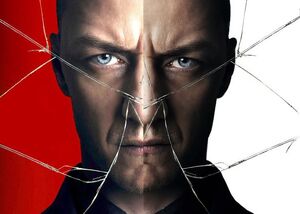 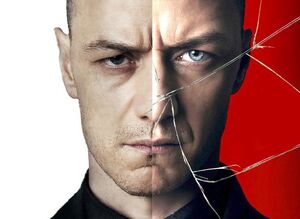 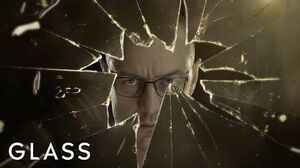 Glass - Teaser Trailer (Beast)
Add a photo to this gallery

Retrieved from "https://villains.fandom.com/wiki/Kevin_Wendell_Crumb?oldid=2970780"
Community content is available under CC-BY-SA unless otherwise noted.