Get revenge on the witnesses of his crimes (succeeded).

Kill Carl Black after extorting him to return his drugs and cash (failed).

Key Flo is the main antagonist of the 2016 satirical comedy horror film Meet the Blacks and a cameo antagonist in it's 2021 sequel The House Next Door.

He was portrayed by the late Charlie Murphy who also portrayed Jizzy B. in Grand Theft Auto: San Andreas, Ed Wuncler III in The Boondocks, Coach Ashmokeem in The Cookout 2, and Gusto in CB-4.

Key Flo is a notorious drug lord in the city of Chicago known for dealing and selling marijuana and cocaine. His taste for flashy track clothes, combing his long flat hair, space heater and even toilets.

Key Flo was seen being arrested by the police shortly after calling the local company "Don't Hate Wiring" owned by local electrician Carl Black Sr., who was present at his mansion in Chicago.

6 years later, he was free from jail and killed every witness to his actions in revenge. During the annual purge he opted to assault Carl Black's house in order to torment him into delivering cash and dope, that he owed him. Black and Flo meet during the assault and the vindictive dealer demands his desires, but is tackled back and impaled on a hanging crook on the wall and falls to his death, bleeding.

At the end of the film, however, it is revealed that he is still alive, saying this to the audience; I am still alive.

He appears in a flashback Carl Black has when his life flashes before his eyes. 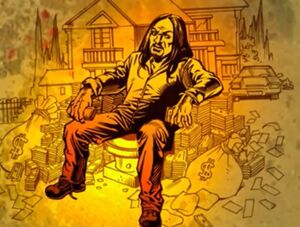 Key Flo as seen in the cut-out animation of Meet the Blacks's opening scenes.