Giving revenge for people who suffered.
Having sex with the women in his party.
Hunting down fake heroes.

Take vengeance on those who wronged him and the others.
Eliminate all of the fake heroes.
Avenge his parents, Anna and everyone from his home village.
Brainwash Princess Flare after raping her and turn her into his personal loyal puppet, Freya.
Kill Blade for her torments and abuses upon him.
Kill Renard for torturing him and raping Anna.
Torture, rape and brainwash Princess Norn and turn her into a loyal puppet of his, Ellen, like he did with Flare.
Kill Bullet for relentlessly raping him.
Turn all villages against his Jioral Kingdom.
Kill King Proum Jioral and put an end to his evil tyranny (all succeeded).

Keyarga, originally known by his real name, as Keyaru and also known as the Hero of Recovery, is the titular protagonist villain of the controversial 2017 Japanese dark fantasy light novel, manga and anime series Redo of Healer.

Once a gentle and kindhearted person who was chosen as the Recovery Hero by the Jioral Kingdom, he was betrayed by the reign’s princess, Flare Arlgrande Jioral, the other heroes, Blade and Bullet as well the Kingdom's knight including Renard, the Knights' Captain, and the maids and butlers, who tortured him by endlessly drugging, raping, enslaving, abusing and beating him up, and, as he will later discover, caused all those he loved and cared about to painfully die, bringing him to his fall into madness and vengeance, shattering all that was left of his kindness and turning him into a misanthropic, sadistic, vengeful, psychopathic, perverted and murderous rapist, bent on remaking his lifetime in order to take vengeance on all those who stripped him of everyone and everything he had.

Evil Keyarga is a young man with a slim build, medium length brown hair, and red eyes, initially seen dressed in simple clothing worn by most civilians or villagers. Whenever using his "Jade Eyes" skill, his right eye shines green. When he was Keyaru, he looks much younger in appearance with shorter hair and a less defined face.

Before being betrayed, Keyarga started off as a weak willed but a kindhearted young man who had rather simple dreams and became excited after realizing that he was one of the Heroes who would save the world. However, he became frightened and didn't want to use his Healing skills after realizing that he takes their pain and memories after healing them.

However, after being betrayed, drugged, enslaved, tortured. beaten and raped by men and women who wanted to break their level caps from the capital for an extended period of time, Keyarga became a rather sadistic, perverted, vindictive, manipulative, cunning and misanthropic rapist, who would do whatever it takes to achieve vengeance on anyone who has done him any wrong. He has discarded almost all his former kindhearted and generous nature, although he doesn't involve normal citizens around him.

Keyarga is also extremely miserable and actually very sorrowful, a sorrow he hides behind his wrath and his need for vengeance, as he suffered massive despair and anguish after his parents, Anna and everyone from his hometown Alban Village, were killed by enemy bandits, and Anna was raped by the former Knight Captain [Renard. Following the loss of his love ones, he became a completely coldblooded psychopath when he lost his remaining sheds of humanity inside of him after becoming the sole survivor of his now destroyed Alban Village his homeland. He also grew extremely misanthropic and resentful towards humanity because of everything he has been through, saying that Anna was the only one that made him still believe, although very little, in the good of other people, ending up abandoning any believing about the good in people after her suicide.

To this end, he had redid his entire life to the point where he managed to be alone with Flare Arlgrande Jioral, the First princess and Magic Hero, brutalizing and healing her for an extended period of time after breaking her fingers, before preparing to brutally assault and rape her, at one point even threatened to do it with a hot rod from the fireplace if she didn't beg for it, then erased her memories becoming Freia, one of his "toys". He also transformed the former Knight Captain Renard (who had a hand in physical abusing him, kidnapped and killed his villagers, and raped his first love, Anna while wearing his face) into a woman, then had his brainwashed subordinates to viciously gangraping him before setting the house on fire, burning him and his brainwashed men both to death.

When he shapeshifted himself as a girl named Keara to lure Blade into a trap, he fed her to the three rabid men for her previous torments that he endured such as cross dress as a girl, not letting him to eat, pummeled him and drugged him. After killing Trist Organ, he captured, raped and tortured the second princess, Norn Clatalissa Jioral, out of revenge for destroying his home village and having his people executed for is resistance, even had her troop kill the people of Buranikka including the death of Karman (who is a demon store seller that Keyarga actually came to consider and view as a trusted friend). This acts will lead him to torture and rape Norn, and then erase her memories and becoming Ellen, his new "toy" just like he did to her sister, Flare. Keyarga continues his revenge by hunting down King Proum Jioral (the source of evil) and the last falsely hero, Bullet (who raped him for his "love" of boys).

Since then, has started using aphrodisiac drugs against woman who he had fought against similar to what was done to him, then proceeds to have sexual intercourse with them when they were on the breaking point whether their actions were justified or not in their situation, making them fall in love with him so that he could use them as "tools" or make them his "toys", but he feels that all the girls of his Harem are not just part toys and feels that the girls really love him so he decides to take care of them.

He despises those who gets away with their crimes and enjoys a happy life, which has driven him into assisting those who desires revenges like himself, often adding onto his own desire to seek what appears to be endless targets and even goading them into killing their targets. when using Freia (in his original self as Flare), he was able to convince the villages the truth of Jioral Kingdom's atrocities causing the villages and their inhabitants to turn against the Kingdom for their sins.

Despite of him as coldblooded, he shown to be honorable when he freed Setsuna (a demi-human who was the Jioral Kingdom's slave) and is willing to help those who suffered or died by the Jioral Kingdom in their quests for revenge. He has good terms with Kureha Clyret (who is the only person that didn't harass him) and manage to persuade her into his side and betray the Jioral Kingdom after he revealed to her that the Kingdom were never the true shield of humanity where she now realized that she was only a pawn to them. He considered Karman (who was the demon store owner) as a friend, but won't let his death be in vain after killed Norn's army and Trist Organ as well captured the second princess to make her suffer of avenging Karman.

After killing the last of the falsely heroes Bullet and destroyed the Grantsbach Empire, Keyarga has finally redeemed himself when he got everything back and ending his vengeance.

Originally he was born from Alban Village as an innocent boy chosen to become a legendary hero specializing in healing, Keyaru was just being used by them after being deceived and tormented by those he was supposed to fight alongside. Eventually, after having his kind nature warped into spite by his torturers, Keyaru found out a way to reverse time to before he had been chosen as a hero.

In this new reality, Keyaru plotted his revenge against all those who had betrayed, tortured and broken him. After brutally disrobing, torturing and raping his lead tormenter, Princess Flare Arlgrande Jioral, Keyaru used his healing power to change her face and wiping out all of her memories. Taking up the identity of "Keyarga", the vengeful boy left behind any vestiges of his past identity and decided to continue his quest for vengeance by eliminating the Jioral kingdom's royal family and killing the kingdom's knights, attendants and eventually the fake heroes. He lured the falsely heroes into a trap one by one. After murdering Trist and brainwashed Norn, He later made the entire villages to turn against the Jioral Kingdom after revealing the Kingdom was never the shield of humanity due to their true nature of cruelties when they enslaved and murdered innocence people and demi-humans. After killing the evil King Jioral, Keyarga took the throne and became the new king to change the Jioral kingdom as a better and peace kingdom. But the revenge is not over and never know peace yet until the last of the fake heroes, Bullet is dead including a new threat from Grantsbach Empire, so he must completely the revenge and make the world even more peaceful as the Hero of Recovery as well as the new Jioral king with his harem girls. After eliminating Bullet and the Grantsbach Empire, Keyarga finally exacted his revenge and achieve peace. 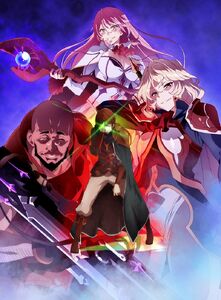 Keyarga and his tormenters on the first key visual for the anime adaptation. 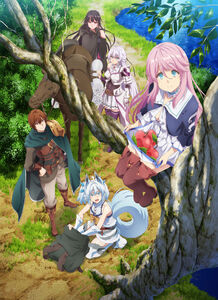 Keyarga and his party on the second key visual for the anime. 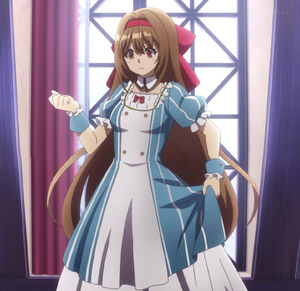 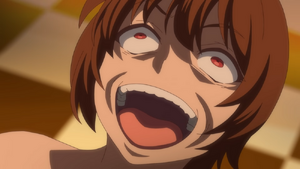