Member of the Nine Demon Gates

Activate Face to cleanse the presence of Magic on the continent of Ishgar and use it to activate the Curse Power to revive E.N.D.

Keyes (in Japanese: キース, Kīsu), is one of the antagonists in the manga/anime Fairy Tail. He is an Etherious of the Dark Guild Tartaros and a member of the Nine Demon Gates.

He is voiced by Jouji Nakata in the Japanese version of the anime, and Doug Jackson in the English dubbed version.

As his alias "Black Priest" suggests, Keyes dresses in form-fitting robes with a high collar. The robe itself has a checkered pattern, and covers a collared shirt and tie that Keyes wears beneath. Around his face and on his head, Keyes wears an ornate head piece, revealing Tartaros' guild mark, covering his jaw and fanning out over his head almost like a crown. Most notably though, Keyes does not have a human face. Instead, his body seems to be that of a skeleton, with Keyes possessing no nose, eyes or skin.

Keyes is a very silent, uncaring, and mysterious Demon who rarely says a word, although he usually mutters. He has a calm, sadistic, and manipulative demeanor, even when he is about to face his enemies, as he eerily threatened Lucy, Wendy, Happy, and Carla before confronting them.

Despite his seemingly harmonious and unperturbed personality, he has shown to have a more artful, twisted, scheming, and torturous side of his personality; Keyes utterly despises humans and he treats them as tools for him to use for his Necromancy experiments. He sees feelings as humanity's own weakness as he claims that feelings just gets in their way. Keyes is also very wicked and derogatory, so he doesn't show a trace of remorse on his actions, taking pride in having resurrected Silver's corpse, even marveling at his powers. He also didn't show concern at the fact that Silver wanted to take revenge against the whole guild nor worries about if Silver ends up killing his own son, if that allows him to improve the abilities of his Necromancer. He is also very adventurous and confident in his plans, and has no problems toying with people's feelings: he mocked and taunted Juvia when she was about to make an important decision for Gray's sake and he told her the whole truth about Silver while they were fighting. However, he is shocked when something doesn't go the way he had planned and even curses his own folly when making a mistake.

At one point in time, using his Curse, Keyes resurrected hundreds of corpses, one of which included Silver Fullbuster, in an experiment to find out how much a corpse could behave like a living human.

Keyes gathers with his fellow Nine Demon Gates members at the Tartaros headquarters. As they convene, the group are joined by Kyôka and Silver, both of whom were off on "special missions". Hearing that two of their other members, Jackal and Tempester, are also out, the group move to put their plans against the Magic world into action.

After hearing about Jackal's successful mission involving the destruction of the entire Magic Council, Keyes listens as some of the other Nine Demon Gates members argue over their lack of participation in the plan so far, though he chooses to remain out of the conversation, instead silently commenting about their dedication to Zeref. Later, in Tartaros headquarters, the Black Priest is among the several to sense Natsu Dragneel break into their base.

With the Fairy Tail Guild having landed on and entered their headquarters, Keyes heads out to confront some of the guild members, soon finding Lucy, Wendy, Happy and Carla as they head out to deactivate Face. Approaching the Fairy Tail Mages, who stand scared at his skeleton-like appearance, Keyes threatens the two women to hell, stating that they shall soon be corpses.

As he continues his advance, Keyes is joined by Franmalth, who was hiding in the room as Lucy and Wendy investigated it. Before they can attack, Lucy summons both Taurus and Aries, and the two combine their abilities to form a cloud of wool, which temporarily blinds Keyes and Franmalth, allowing Wendy and Lucy to fly from the room. However, Keyes rapidly teleports from the control center, reappearing in front of the two once more. As he begins to cast a spell to take them out, he is struck from behind by Gray, though turns his body into a black mist to avoid receiving any physical damage. Reforming himself in front of Gray, Keyes recognizes the Ice-Make Mage, and utters Silver's name. Confused, Gray casts an array of Ice-Make spells at Keyes, though the Demon merely utilizes his mist body once more in order to avoid them, silently muttering that soon Face shall be activated as an annoyed Gray curses his abilities. Keyes continues to battle Gray until Mard Geer activates a Curse that transforms the entire fortress; the Curse causing the enemy Fairy Tail Mage to sink into the ground and be trapped in the stone. Keyes merely watches as the process is completed.

However, after Lucy manages to summon the Celestial Spirit King to her aid, the Alegria Curse is lifted from Cube, freeing the Fairy Tail members who were previously trapped. Coming to the aid of Torafuzar when he is attacked by Gajeel, Keyes attempts to strike the Iron Dragon Slayer from behind, though is stopped by Juvia, who swoops in to save her comrade. At the same time, both Silver and Gray join the fight, being followed soon after by Tempester and Natsu. Facing off the Fairy Tail members, Keyes prepares for a four-on-four battle.

Staring down his enemy, Keyes watches as Silver and Tempester spring into action, the former grabbing Gray and disappearing whilst the latter creates huge whirlwinds to blow their opponents about. As Gajeel and Torafuzar later clash, Keyes moves to intercept Natsu as the Dragon Slayer tries to help his friend, surprising him with his mist-like body and easily dodging Juvia's Water Slicer to attack her in return. As he regroups with his fellow Demons and watches Fairy Tail do the same, Keyes silently mutters that nothing is over yet. Continuing his battle with the three Fairy Tail Mages, Keyes shrugs off a punch from Natsu, his body yet again turning into a misty substance. When Natsu leaves him, Keyes turns to attack Juvia once more with his khakkhara, striking her as she stands distracted. Hearing her mumble that she believes Gray is in danger, Keyes comments that it will soon be the end of Gray's life, receiving a rage-filled glare from Juvia as he explains that Gray will lose himself in a calamity and follow the fate of his mentor, Ur. Glorifying Silver's Magic abilities, Keyes aims an attack at Juvia as the Water Mage asks why a person with Devil Slaying Magic would join a guild of Demons; Keyes replies that it was all the whim of Mard Geer that Silver be accepted as a Demon Gate and strikes a distracted Juvia with yet another attack. In the midst of the battle, Keyes lets Juvia know that Silver is, in fact, a corpse of Gray's father revived by the Demon.

Now rapidly assaulting Juvia, Keyes states that they knew Silver was acting against them, but adds that they let him continue to act as his desire for revenge extended his life; calling him a fascinating puppet, Keyes expresses his belief that humans are merely tools for his research, stating that such shall be his history, in which he will create a perfect corpse for him to control, angering Juvia.

Making his body intangible, Keyes removes himself from harm's way and tells Juvia that he will next use her corpse to kill all of her friends. Wrapping himself around her body, Keyes tells her in response to her defiance to kill him, but mentions that if she does, Gray will once more be without a father; he then gleefully taunts Juvia whilst citing his belief that human emotions are foolish. With a final twist of his body, Keyes seemingly crushes Juvia, much to everyone's shock, but quickly realizes his folly, as her water body begins to struggle and move about inside him; Keyes is then blown into pieces as Juvia forcefully exits his body. His death soon allows Silver and all affected by his Necromancer to finally rest in peace in the afterlife.

Keyes arrives at the battlefield with the help of Neinhart's Historia of the Dead, appearing before Juvia and intimidating her while commenting on the interesting nature of his summoner's Magic. Not long after that, he attempts to poison his foe by cloaking her with his Magical Barrier Particles. However, it is not long before Meredy and Juvia unite their powers, quickly finishing off both him and Zancrow by casting Maguilty=Water.

Necromancer: Using this Curse, Keyes has the ability to perform necromancy, which allows him to revive and control a deceased person, as seen when he used Crawford Seam to remotely activate Face. Keyes is able to reanimate hundreds of corpses at a time, which allowed him determine how much a corpse could behave like its former self. However, corpses revived under Keyes control may only exist for a limited time unless they possess a driving force, as Silver's desire for revenge against Demons allowed him to stay reanimated much longer than other corpses. Furthermore, if Keyes is defeated, corpses under his control will cease functioning.

Judgment of Malefic Star: Keyes raises his staff and a dark aura surrounds both it and him. He uses the aura to inflict massive darkness-aspect damage to a large scale of enemies at once. Although he was never shown to utilize this attack, it is mentioned in the Official Tartaros Member Guide at the end of Volume 46.

Magical Barrier Particles: Keyes' body is made up of thick black particles, allowing him to move similar to a mist and cause both Magic deficiency and illness, as seen after Juvia forcibly exited his body. The said ability allows Keyes to deform and reform his body seemingly at will to avoid physical and magical attacks, though he has also been seen utilizing the ability almost unconsciously, being able to dodge a sneak attack by Gray with no effort at all by morphing his body as soon as the Ice-Make Mage made contact with it. Offensively, Keyes can manipulate the poisonous anti-Magic particles in various ways such as spiraling currents, a wave, or an explosion to attack opponents.

Immense Curse Power: Keyes has demonstrated that he can keep and / or manipulate the bodies he has resuscitated and, at the same time, be able to fight uniformly (alongside his companions Tempester and Torafuzar) against three powerful mages such as Natsu Dragneel, Gajeel Redfox and Juvia Lockser.

Enhanced Speed: While using his Magical Barrier Particles body, Keyes can travel at high speeds, even without getting noticed by his enemies. Keyes can also use his own body to throw a sneak attack, and is fast enough to even outpace Natsu, Gajeel and Juvia simultaneously. 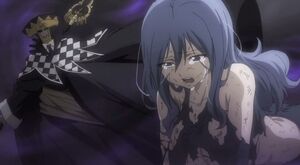 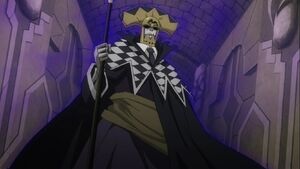 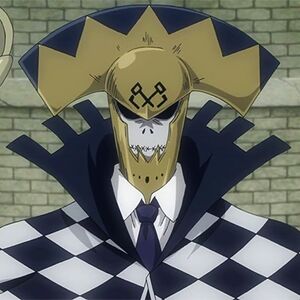 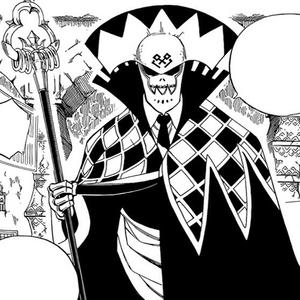 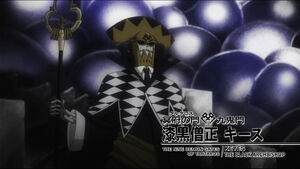 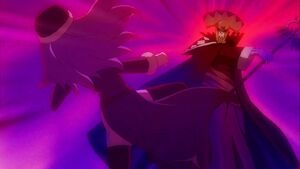 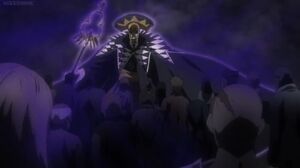 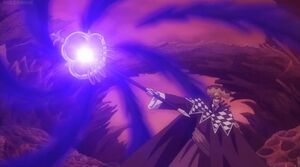 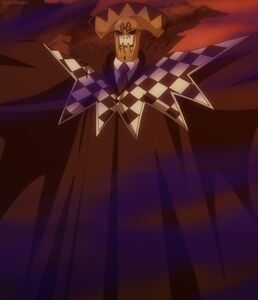 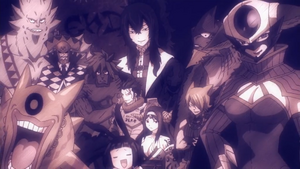 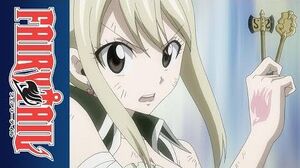 Retrieved from "https://villains.fandom.com/wiki/Keyes?oldid=3557565"
Community content is available under CC-BY-SA unless otherwise noted.