Leader of the Butcherhorde warband of World Eaters

Keep eternally spilling blood and collecting skulls in the name of Khorne.

Khârn the Betrayer is a powerful follower of Khorne and a formidable opponent on the battlefield where he and his many followers seek "Blood For The Blood God" via mass slaughter and mayhem.

Khârn is the greatest of all the Champions of Khorne, second only to the Daemon Primarch Angron in power. He wields a chainaxe known as Gorechild (which, along with its twin Gorefather, was wielded by Angron himself during the Horus Heresy), rimmed with the teeth of a Mica Dragon. He is the avatar of Khorne, embodying the god's indiscriminate rage and bloodlust.

Like his Legionary compatriots, his brain was re-wired as a recruit, so that he finds joy only in killing the enemy. His love of killing is so great that he has actually had a kill counter installed in the lens of his helmet.

Before the Horus Heresy, Khârn was captain of the 8th Assault Company of the World Eaters Legion, and also served as the personal equerry to Angron - something of a "cool head" to his Primarch's bloody rages (which is somewhat surprising, given the World Eaters' practice of essentially lobotomizing their warriors). Despite this, Khârn was known even before the Heresy as a brilliant but unstable warrior.

During the infighting on Isstvan III, Khârn was believed killed in action while fighting Garviel Loken of the Luna Wolves, a loyalist determined to stop Horus from attacking Terra by holding his former legion. Khârn engaged in close combat with Loken, only to be thrown against the dozer blades of a nearby vehicle, impaling his chest. It was believed that the blow was fatal, but this has been proven wrong.

During the Heresy and the culminating siege of the Imperial Palace, he was at the forefront of every assault. At the Heresy's defeat, Khârn already lay dead upon a mound of corpses at the walls of the Inner Palace. His fellow World Eaters carried his corpse away with them as they fought their way back to their ships. Once on board they discovered that by some dark miracle Khârn still lived. Whether Khorne himself breathed life back into the berserker's body or whether the relentless clamour of battle revived his blood lusting spirit remains a mystery, but since the Heresy Khârn has survived the bloodiest battles to the current age and never came so close to death again.

At the Battle of Skalathrax, Khârn became both legendary and infamous amongst his legion. He slew in a berserk rage Emperor's Children and World Eaters alike, earning him the title The Betrayer, and shattering the Legion into the individual war bands it now consists of. From then on, he has become the unstoppable and bloody avatar of Khorne.

Afterwards he hunted the Eye of Terror, slaughtering any worthy enough to be killed in Khorne's name. During the Thirteenth Black Crusade his wrath was unleashed upon the Imperium as Khârn alongside a few of the most insane of Khorne's berserkers turned on the Emperor's warriors flocking to the defence of Cadia.

Khârn the Betrayer is one of the most deadly yet unstable close combat fighters in the entire galaxy, he is just as likely to attack his own allies in a berserk fury as he is the enemy. Armed with a warp-enhanced Plasma Pistol and his ancient (possibly daemonic) Chainaxe Gorechild, he is able to tear through armor, flesh and bone with ease. To emphasise that he is truly favored by Khorne, he is subject to the Blessing of the Blood God, as a result he is immune to the effects of psychic powers. Additionally, since he has become daemonically corrupted Kharn exudes a blood mist wherever he walks. This unnatural mist allows for the manifestation of daemonic creatures and can drive lesser foes to madness. Kharn's personal killcount is said to be in the millions, but this is hard to confirm, but at the same time not infeasible. 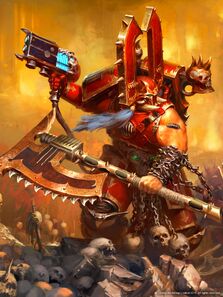 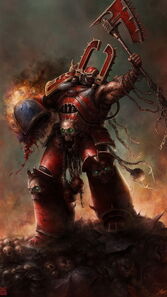 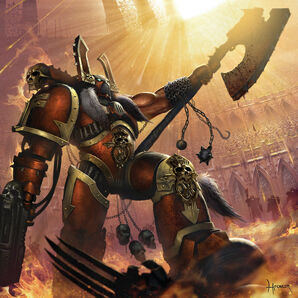 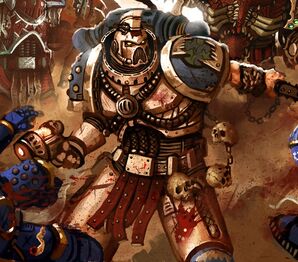 Khârn during the Horus Heresy
Add a photo to this gallery
Retrieved from "https://villains.fandom.com/wiki/Khârn_the_Betrayer?oldid=4084307"
Community content is available under CC-BY-SA unless otherwise noted.