Servant of the Watchers

Adapt to match the skill and intellect of his enemies.
Kill and eat Rengar.

Kha'Zix, also known as The Voidreaver, is a villainous playable character in the multiplayer online battle arena game League of Legends. An evolving Voidborn created to kill the strong and adapt to his surroundings, Kha'Zix is a merciless hunter lurking in the jungles of Ixtal, wreaking havoc on victims wherever he sets foot.

The 105th champion added to the game, Kha'Zix was released on September 27, 2012, and is most commonly played in the jungle.

Long ago in the Void, the Watchers were annoyed by the existence of reality, and created the Voidborn to study and find ways to destroy the world known as Runeterra. One of these monstrosities was a small, evolving horror that would come to be known as Kha'Zix, the Voidreaver, an abomination that would adapt to its prey and eventually rid the world of its most deadly creatures.

When Kha'Zix first arrived in Runeterra, he was nothing but a small, ravenous creature who wandered Valoran, mutating with every small animal he killed and feasted upon. Eventually, however, Kha'Zix decided that feasting on the weakest prey he could find would not be enough to fuel his evolution into a powerful being. In order to become an apex predator, he had to hunt only the most dangerous prey he could find. Following this, the Voidreaver soon became an agile, aggressive beast with the intelligence to plan his hunts and strike fear in his victims.

After a long time of doing this, however, Kha'Zix soon found himself at a roadblock. Another hunter, a vastayan from the Ixtal jungle known as Rengar the Pridestalker, sought to become the apex predator of the land, something that Kha'Zix took as a challenge. One day, the Pridestalker ambushed Kha'Zix, leaving his blood spilled for the first time ever. Kha'Zix was surprised, but not killed, and wildly slashed at his attacker in a heated battle. Kha'Zix cut at Rengar's eye, blinding it, and the two hunters fought the entire night before both retreated on the brink of death.

As Kha'Zix's wounds healed, however, he felt not disappointed but instead thrilled at the idea of a fighter who could match his strength. If Kha'Zix could somehow defeat and consume on this worthy prey, he could evolve to a form that no creature would be able to defeat. And so, the Voidreaver began his hunt for Rengar, hoping to cross paths with his prey once again so that he could feast.

In game, Kha'Zix is an assassin-type character, using his high mobility, damage, and stealth to infiltrate enemy lines. His passive, Unseen Threat, let him deal additional damage to enemies that are Isolated from their team. As he upgrades his ultimate, Kha'Zix can Evolve his abilities, making them stronger. He can use Taste Their Fear to deal physical damage to targets (evolving Reaper Claws increases range and refunds cooldown), Void Spike to launch spikes at enemies (evolving Spike Racks triples spikes fired), and Leap to jump to an area (evolving Wings increases the range and rests cooldown after helping kill a champion). Kha'Zix's ultimate, Void Assault, makes him invisible for a short time and lets him move faster, with a bonus duration and an additional use when Adaptive Cloaking is evolved.

When Kha'Zix was first created, he was a vicious but unintelligent beast that only knew how to kill and eat. However, his mutating abilities allowed Kha'Zix to develop a growing sentience, complete with an intelligent mind, fearless attitude, and a sadistic sense of humor. Kha'Zix has a lot of pride, seeking out "worthy prey" in hopes that he can grow stronger than them and eventually kill them, which was the origin for his rivalry with Rengar, as their previous battle was a stalemate and Kha'Zix now considers him an equal. While hunting the Pridestalker may not be such a good idea on the surface, Kha'Zix remains determined in his goal, whether it be from arrogance or just as a result of his programming as a Voidborn to seek out and kill the strongest creatures. 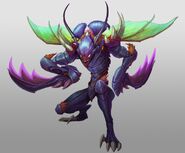