Enforcer for the ASA

Member of the 100 gang (formerly)
Student at Garfield High (formerly)

Be with Jennifer (formerly).

Khalil Payne, later known as Painkiller, is the former antagonist/supporting protagonist in the series Black Lightning, appearing in every season thus far. He is the show's version of the DC villain of the same name.

He is portrayed by Jordan Calloway, who also played Chuck Clayton in Riverdale.

Khalil is a student at Garfield High and a friend of Jennifer Pierce, the daughter of principal Jefferson Pierce who is also secretly the superhero Black Lightning. Khalil comes from a poor family, his brother has been shot and his father is in jail, but is a superb athlete and has high hopes for a stipendium.

After Jennifer and her sister, Anissa is kidnapped by the 100 gangs and saved by Black Lightning, Khalil meets with Jennifer on the roof of her house. He is in awe that Jennifer saw Black Lightning and musters up his courage to admit to Jennifer that when she was captured he realizes what he felt for her. He asks her whether she wants to be his girlfriend and Jennifer smiles and agrees. Khalil gives Jennifer a necklace and the two kiss.

After Jennifer drinks alcohol at school to cope with her being kidnapped, Khalil is horrified. He takes the bottle from her and throws it away. He tells her that alcohol is not the way to deal with stress, reminding her that he had a shitty life as well but that God gave him a gift - he can run fast - so he will use this gift to get out of Freeland eventually. He tells Jennifer that he would love for her to come with him but tells her that she cannot live like that any longer. He then hugs and comforts her.

When Jennifer and Khail make plans to have sex for the first time, Khalil admits to Jennifer that he lied before and never had sex with another girl before. He states that he just wanted Jennifer to think that he had experience and deeply apologizes. However, Jennifer admits that she never had sex herself and tells Khalil that she never found him sexier before. When Jennifer tells her family that she wants to have sex with Khalil, she is amused by the reaction of her parents who ultimately support her decision. However, in his role as principal of Garfield High Pierce intimidates Khali and makes him greatly uncomfortable.

When Reverend Holt rounds the citizens of Freeland up for a protest march against the 100 gang, Jennifer convinces Khalil to come with her. During the night of the march, the gang leader of the 100 gang, Tobias Whale, sends a gang member to shoot up the march. The attack is stopped by Black Lightning but Whale then orders his assassin Syonide to take a shot at Black Lightning. Syonide misses and shoots both Reverend Holt and Khalil instead. The bullet shatters Khalil's spine and renders him paralyzed.

Khalil is immediately rushed to a hospital where his life can be saved. However, Khalil is informed that he most likely will never walk again. Although he manages to hide his fear at first and clings to the hope of getting better, all this is shattered when he is informed by the doctors that his spinal cord has now completely been severed and that he will never walk again. Now bound to a wheelchair, Khalil's personality drastically changes. Having lost his only power - running - Khalil sees his life goal destroyed and primarily blames Jennifer for it. Realizing this, Tobias Whale sees the potential Khalil shows for being a weapon against Black Lightning. Whale sends all kinds of stuff to Khalil's hospital room to make him more comfortable and also provides his mother with money for the rent. Tobias even meets Khalil in his hospital room to make sure Khalil has everything he needs to cope with the situation.

When Jennifer finds out that Khalil has shared humiliating photos of her on Instagram, also making fun of her privilege of being the principal's daughter, Jennifer confronts him. She states that maybe they should take a break and the bitter Khalil asks whether the break will last until he walks again. He then openly accuses her of being responsible for the situation, since he would never have gone to the march if it weren't for her. He bitterly reflects that he did everything right and still lost his legs and angrily tells Jennifer to get out when she claims that she will pray for him.

The next night, Khalil is picked up by Tobias Whale who promises him that they will find a way to make him walk again.

Khalil is delivered to the A.S.A. who starts working on a way to allow Khalil to walk again. Although Whale at first oversees the project himself, it is taken over by Martin Proctor after Whale got hurt in a battle with Black Lightning. Through a spinal implant, Khalil is eventually able to walk again but the implant also causes his body to create some kind of toxin that causes instant paralysis on whoever is injected with it. The A.S.A. and Whale weaponize this as well by giving Khalil wrist dart shooters as a way of the delivery mechanism for the toxin. After Tobias has regenerated and is operational again, Proctor sends Khalil out with Whale to capture Black Lightning.

While Khalil is out on the streets of Freeland, he randomly meets Jefferson Pierce who is surprised to see that Khalil is walking again. Pierce asks whether this means that Khalil will be coming back to school soon but Khalil tells him that he has other plans. Pierce tries to convince Khalil not to abandon his education but Khalil only turns around. Pierce calls him back and asks him what kind of procedure was done on Khalil because he wants to be sure Khalil is not taking advantage of by a higher power. Insulted and shocked, Khalil turns around and states that he is walking again, so it can hardly be taking advantage of him. He states that Pierce really lives in his world and that he only wants for Khalil to return to school because this would mean that he could parade another poor kid around. He bitterly states that Pierce dropped him the moment he could not walk anymore and that he did not even let Jennifer near him anymore. While he walks away, Khalil mocks Pierce by recounting the school's motto "Where is the future", revealing that he is the future.

The same evening, Khalil meets with Jennifer despite Pierce having warned her about not meeting him ever again. They meet at their old spot, on the roof of Jennifer's old house, and Khalil tells her that he wanted her to be the first to see that he is walking again. Jennifer hugs him and Khalil apologizes for the way things ended between them. He is also extremely proud of his spinal implant and tells Jennifer about the procedure and what he went through. When Jennifer comments about his dreads, Khalil reveals that some drugs they gave him for regeneration made his hair grow faster. Khalil then tries to kiss Jennifer but she moves back from him. The conversation gets tense again when Jennifer asks about how Khalil was picked for the procedure. Realizing that these are her father's words, Khalil claims that he is better off without her and jumps off the room, much to the shock of Jennifer.

He returns to Whale's headquarter, where Whale informs him that he needs to go back to Garfield High the next day. Khalil is surprised and Whale acknowledges that Khalil has feelings for the people there, but reminds Khalil that this is business and business comes first. He reveals that they need to catch Black Lightning and thus wants to set a trap for Black Lightning at Garfield High. Whale tasks Khalil withdrawing out Black Lightning and claims that he knows that Khalil tried to get his old girlfriend back. He reminds Khalil that Khalil made a deal - legs for loyalty - and that his old life is in the past now. He also warns Khalil that he will rip out his spinal implant and ram it down his throat if Khalil screws up.

According to the plan, Khalil heads to Garfield High the next day. After crashing one of the school buses, he enters the building and fires tranquilizer darts from guns mounted to his wrists at students. When one of the teachers approaches him, Khalil grabs him and hurls him into a showcase. After clearing the floor, Khalil jumps uses his new powers to straight-up jump to the second floor where he fires more projectiles at students. Eventually, Jennifer confronts him and tries to get him to stop but Khalil claims that he is just getting started. He claims that he needs to do this and promises that he will not attack Jennifer's friends but then orders her to get out.

While Black Lightning fights Tobias Whale in the hallway, Khalil eventually joins the battle after Pierce has gotten the upper hand. He hurls a locker at Pierce to keep him away from Tobias and then fires one of his darts into Black Lightning's neck. This prevents Black Lightning from using his lightning powers and thus, he is outmatched when Whale and Khalil both attack him. Tobias grabs Pierce from behind and as Pierce is incapacitated, Khalil sprints down the hallway jump at Black Lightning and delivers a powerful blow to Pierce's chest that kills him. When Whale finds no pulse on Black Lightning, he angrily shouts at Khalil for killing him. He then plans to remove Black Lightning's mask to finally find his real identity, but Thunder arrives and uses her powers to throw both men to the floor. Only Syonide's arrival allows Khalil and Tobias to flee. After they have left the school, Pierce is revived by Jennifer's lightning powers.

Back at their headquarter, Khalil apologizes for killing Black Lightning and Tobias playfully asks Syonide if they should let Khalil's blunder slide. As a response, Syonide raises her gun and claims that he has a question herself - can Khalil fire one of his darts at Syonide before she riddles him with bullets. Laughing, Tobias claims that he knows the answer to that but then tells Syonide to stay down; also ordering Khalil to take a seat.

Tobias then states that the rules of morality do not apply to them and that Khalil, Painkiller, should never apologize. Tobias states that all that Khalil did was killing Black Lightning when Proctor wanted him alive, revealing that he is not mad. He reveals that he knew that Martin Proctor was an ally of Lady Eve and that a result, he had to go sooner or later. All that changed is that Martin now needs to go "really soon". After Khalil and Syonide have found out that the A.S.A. unit is fighting Black Lightning and his family in a forest outside the city, Whale uses the opportunity to strike. Together with Syonide and Painkiller, he heads out and attacks the A.S.A. headquarters were the three massacre the remaining agents - who are mostly technicians and unarmed. The three take down all agents inside the building except Proctor who escapes through a hidden exit. 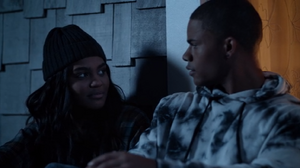 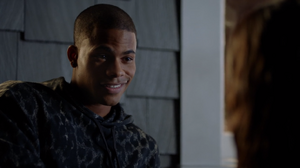 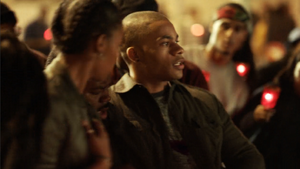 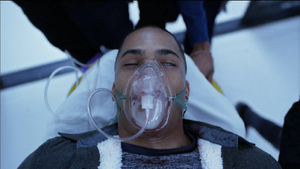 Khalil is rushed to hospital 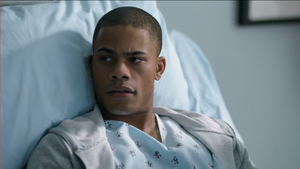 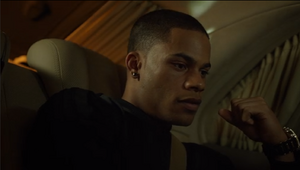 Khalil is brought to the A.S.A. 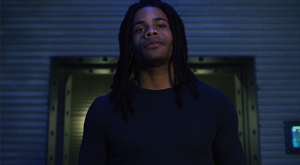 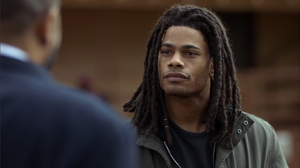 Khalil is stopped by Pierce. 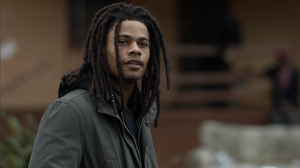 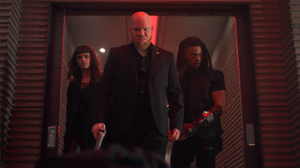