Lord of the Nazgûl

Reclaim the One Ring for Sauron.

Khamûl is a Nazgûl, one of nine, and was in fact second-in-command of the group behind the Witch-king of Angmar. He became the next Lord of the Nazgûl after the Witch-king's death.

In life, he was a king of the Easterlings during the Second Age, and now serves Sauron dutifully after being corrupted by one of the nine Rings of Power Sauron offered to the great kings of Men. It is he who goes to the Shire and the surrounding areas looking for the One Ring and the "Baggins" who possess it. He fails to acquire the Ring however, and he and his fellow Nazgûl are redirected through the efforts of Aragorn and Glorfindel (or Arwen, in the movies).

Like his fellow Nazgûl, he aided Sauron's Orcs and Mannish hordes in their efforts against the kingdom of Gondor, and was along with the other Nazgûl destroyed when Sauron and the One Ring were (though Gandalf believes they were sucked into the Void with him, meaning they may return for the final battle of Dagor Dagorath in the armies of Morgoth). 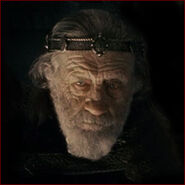