The Supreme Maker
Your Grace

Ruler of the Maykr race

Mastermind behind the Hell invasion on Earth

Have Hell's armies invade Earth and conquer/kill humanity to ensure her race's survival.

Kill Doomguy for interfering with her plans (both failed).

Khan Maykr, also known as the Supreme Maker, is the secondary antagonist of the Doom reboot series.

She is the leader of the Makyrs, a race of extra-dimensional demonic beings that inhabit the realm of Urdak. She is also the one behind the demonic invasion on Earth, and the mistress of the three Hell Priests.

She was voiced by Nika Futterman, who also voiced Asajj Ventress and Sy Snootles in Star Wars: The Clone Wars, Raging Raven in Metal Gear Solid 4: Guns of the Patriots, Megaera in God of War: Ascension, and Vendra Prog in Ratchet and Clank: Into the Nexus.

The Khan Maykr met in Doom Eternal is actually from a line of Khan Maykrs made by the collective consciousness of all Maykrs, known as The Singularity. The Singularity contains the data of every Maykr that has lived or is living, and helps shape the race with selective evolution to perfect them through time. Normal Makyrs are unable to disobey the Khan Maykr. This system worked perfectly until the original Maykr, the Father, vanished without a trace. This caused the Khan Maykr to step in and rule her race and Urdak, even with her corruption from her age.

The Khan Maykr led her race to expand themselves across the universe, eventually teaming up with the Argenta. Following Doomguy's discovery, the Khan Maykr became interested in the demons he was obsessed with, and so set off to find these forces. Invading Argent D'Nur and causing the Unholy Wars, she studied the Hell Essence found in it with the permission of the Order of the Deag. Finding powerful energy that could greatly increase the skill of their military and healing as well as prevent their aging, the Khan Maykr had the Argenta mine this essence while the Order of the Deag used factors to fuse with energy from those who died from the demons to make Argent. Although uneasy with the blessed Doomguy, the Khan Makyr became interested in the prospect of using his endorsement to gain more resources.

With the ongoing war, the Khan Maykr gained a new partnership with the Dark Lord, gaining a direct way to seize more Argent while the demons became able to access other realms. As the demons as expected caused chaos, destruction, and mass murder (With Khan the Makyr claiming this was needed to have her race survive), the Khan Maykr converted these other races into Argent, while also enslaving these populations to make the Soul Spires and also torturing some to the brink of inhumanity before ripping out their soul to make more Argent and turning their physical remains into more demons.

After the Night Sentinels discovered the Khan Maykr's heinous alliance with the demons, some of them rebelled against the Maykrs in a civil war, a futile attempt that ended in all but Doomguy either killed in the war or trying to survive inside Hell.

In the events of Doom Eternal, the Khan Maykr, deeming humanity to be unworthy, helped shape the demonic attempted takeover of Earth to obtain more Argent by torturing the souls of humanity. Having Deag Grav, Deag Ranak, and Deag Nilox act as her right-hands, her plans to destroy humanity are challenged by Doomguy, just as bloodthirsty as ever.

Following Deag Nilox's demise, the Khan Maykr warped the surviving priests elsewhere while warning the hero to not try and stop her, saying that if humanity wishes to survive, they must bow down to her might. She later moves Deag Grav once more after Doomguy kills Deag Ranak, saying that this will not stop her plans. She also attempts to justify her actions to save her people and attempts to make a deal of Doomguy to return him to where he came from and giving him back what he lost if he ceases his actions, to no avail on both fronts.

Now furious with Doomguy's persistence and the death of all three Hell Priests, the Khan Makyr tries to trap Doomguy inside the Fortress of Doom before trying to resurrect the Icon of Sin to destroy humanity. Despite her feeling safe of this plan and claiming that Doomguy will cause humanity's end, Doomguy uses the Crucible to reactivate the Fortress of Doom. Doomguy later barged into the ritual to bring upon the Icon of Sin to Earth and used the Betrayer's dagger to ruin the heart the Khan Maykr would have used to control it. With Urdak free to be invaded, the demons wreak havoc on it, causing the end to both Urdak and its people. An enraged Khan Maykr confronts Doomguy herself over the end of her race before facing him herself.

In battle, the Khan Maykr has six sections of health, and is guarded by a self-regenerating shield on top of this. To attack, Khan Maykr mainly is able to fire blasts of light, shoot balls of lightning, summon a large beam of light to damage the player while also setting the ground ablaze, and once she took enough damage, electrify parts of the arena to make them dangerous if they are stepped on. The Khan Maykr can also summon armored, stronger Maykr Drones the player must defeat. Once her shield is broken, she opens herself to attack as the player gains a full Blood Punch meter. The player must then get up close to her to use a Blood Punch and damage her before she comes back to her senses and restores her shield.

As she lays dying, the Khan Maykr swears that Doomguy's actions on Urdak will cause all creation to be at risk. After this, Khan Maykr meets her end, her orbs ascending to make a large storm as the Dark Lord cries out in anguish. 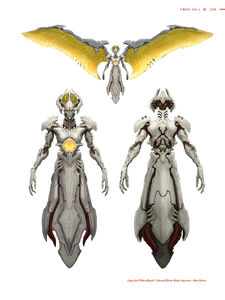 Concept art for the Khan Maykr. 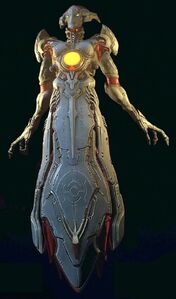 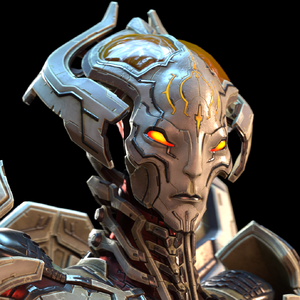 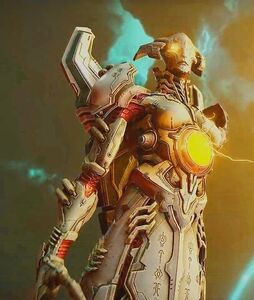 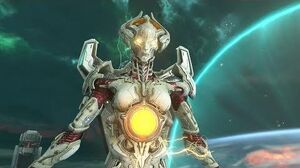