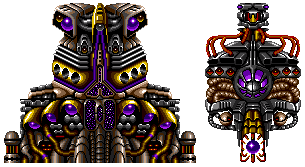 Khaos is the main villain from the Thunder Force series.

Khaos is a huge bio-computer created by humans in the beginning of the space age. Capable of storing data at impressive speeds, it eventually became self-conscious and acquired free-will. Deeming the humans inferior beings, it decided to exterminate human life from the universe (apparently this was the purpose of it's creators), and for this end Khaos gathered military power and created the ORN Empire. It's main opposition comes from the Galaxy Federation and their Fire LEO series of spacecrafts. Khaos was destroyed once in the events of Thunder Force III, but it survived and showed again in Thunder Force IV, when it was finally destroyed for good. Even so, it managed to upload it's own data into the Fire LEO-04 "Rynex" before being completely destroyed. The ensuing explosion made Rynex drift in space aimlessly (their pilots had ejected at the last second), which led to the events of Thunder Force V. Even without their leader, the ORN Empire continued to exist under the rule of ORN Faust and was never truly defeated. Khaos was later revived as the ORN Emperor. 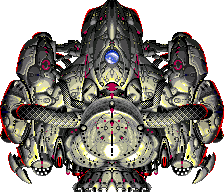 Khaos appearance in Thunder Force IV (as the Vios Computer) 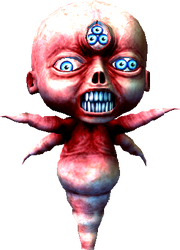 Khaos appearance in Thunder Force VI (as the ORN Emperor)
Add a photo to this gallery
Retrieved from "https://villains.fandom.com/wiki/Khaos?oldid=1823847"
Community content is available under CC-BY-SA unless otherwise noted.