Khasaanda is an oracle just like her twin brother Krellenos. Unlike Krellenos, her prophecies are ignored while Krellenos is showered with praise.

She was originally Prophetess of Bloodtusk Ravine. Later steals Krellenos' powers and absorbs them to replace him as the ninth Lord of Chaos. 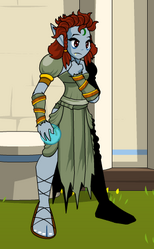