Khloe Sedgwick is the main antagonist of the Grimm episode "Kiss of the Muse". Although she initially appeared harmless, it was revealed that she is a Musai (a creature that locks onto men with untapped power or talent, and brings it out, at the cost of there sanity and later there life).

She was portrayed by Nora Zehetner.

Before turning up she had caused the deaths of several creative men, inspiring great works out of them but leading to them killing themselves. She broke up with on of her latest boyfriends Anton Cole, an artist who she had inspired some great work, but left him insane and obsessed with her. Unable to except her moving on, he attacked her latest boyfriend a author, killing him at his book signing. He tried to kidnap her, but Nick arrived and scared him off. He was also a Wesen, so he dived into a the river and escaped.

Nick felt a strange attraction to Khloe, and let her kiss his hand, thus spreading her spell into him, making him obsessed with her. She of course was unaware he was a Grimm, but sensing colossal power within him. Nick later turned up, she revealed her passion for art, and kissed him on the lips revealing her true form. Thus discovering Nick was a Grimm, she was initially terrified he would kill her, however upon realizing he was still under her spell, she realizes she could use him.

As a Grimm, her spell affected Nick even faster than for any other being (as it acts proportion to power and talent), as such Nick quickly became obsessively in love with her, and unable to resist her. Arriving she told him that Anton was here, and he would have to prove his love.

After Nick was stopped and Anton and Khloe was taken in, Nicks friends revealed they knew what she was, she showed no care at being responsible for so many deaths, trying to justify it by pointing out all the great works of art, music and literature she had inspired before she had led to her boyfriends deaths. Nick was fortunately cured, when they managed to bring him and his true love together again, thus breaking Khloe's hold over him, and her spell.

Sean went to her, and told Khloe to get out of Portland and never come back, or else he would kill her, before revealing his monster side to make the threat clear. 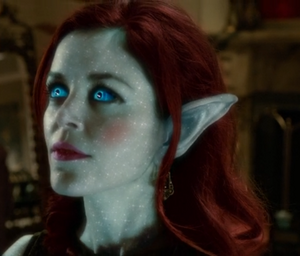 Khloe's true form
Add a photo to this gallery
Retrieved from "https://villains.fandom.com/wiki/Khloe_Sedgwick?oldid=3065835"
Community content is available under CC-BY-SA unless otherwise noted.