Patriarch of the Fang Clan

Taking care of his kids.

Kill Kenshiro and Rei for avenge his sons' death (all failed).

Kiba Daioh, whose real name is unknown, is an antagonist in the anime and manga series Fist of the North Star. Said to be of the father of the Fang Clan, a group of mountain thieves that numbers at least a hundred, Kiba Daioh is a gigantic and deadly martial artist. He is the villain of Mamiya and Rei's introduction arc. His most notable children include Kemada, Gibara, Madara, and Gojiba.

Kiba is first mentioned by his son, Kemada who tells Kenshiro and Rei before they kill him his daddy will get revenge for him.

Later that night when the Fang clan is seen mourning Kemada and the rest of their dead, their massive father finally appears. Crying over his sons, Kiba says the "really badguys" will not be forgiven. After comforting one of his younger sons, Gibara, Kiba declares he will make Kenshiro and Rei feel the pain of losing a loved one. Gojiba, Kiba's smartest son says he will find their loved one.

When Gojiba finds out Rei has a sister who has been turned into slave and is being abused at a warlords hideout, Kiba sets out to capture her to hurt Rei. Entering the slaver's hideout which is filled with martial artists, Kiba demands the slaver give up Airi to them. The slaver, a former champion of underground deathmatches, refuses and calls his men, only to find out Kiba's son have killed them already. Refusing to give up his slave, the warlord slams a gigantic rock onto Kiba, only for the Fang Clan patriarch to shrug it off and kill the slaver with one blow. With the warlord dead, the clan takes Airi as a hostage and returns to their hideout.

After raiding a village and killing many people, a few villagers are taken as prisoners and forced to attend a funeral for Kiba daioh's dead sons. When one of the civilians protests and calls the Fang clan a bunch of murderous beasts, the angry Kiba kills him and decides to make the prisoners a ritual sacrifice to appease the spirits of his dead sons by giving them servants in Heaven. As the villagers are killed, Kiba promises his dead sons he will ensure their deaths. Meanwhile Kenshiro and Rei find out a boy was mortally wounded when the Fang Clan destroyed a house and vow to kill Kiba Daioh.

When Kenshiro, Mamiya and Rei arrive to the clan's mountain hideout, Kiba Daio's strongest son, the wolfman Madara, freaks out and attacks Kenshiro. As Madara starts to lose the battle, Kiba tries to recall Madara before he dies only for Kenshiro to inform him Madara is already dead as the wolfman is blown apart.

Angry, Kiba takes out his ace, Airi and threatens her life, slowly bringing his scimitar closer to her neck. Mamiya bluffs she is Kenshiro's girlfriend and offers herself in exchange for Airi, whilst planning to kill Kiba once she reaches. Mamiya's weapons prove worthless against Kiba Daioh and soon he has a second captive. Rei offers to do anything and Kiba dais says his sister will only live if he kills Kenshiro.

Kenshiro and Rei clash, seemingly dying after their last attack. Overjoyed, Kiba Daioh orders his sons to stab the corpses and then kill the women, whilst thinking his sons are finally avenged, however the seemingly dead bodies of Kenshiro and Rei jump up and kill the Fang clan, revealing they put themselves into a false state of death.

Gojiba is killed in the confrontation and an angry Kiba Daioh decides to face Kenshiro in combat himself. Showing off his ability to harden his skin into steel, Kiba brags Kenshiro cannot hurt him. However Kenshiro delivers a few pressure points on Kiba's body, returning his body back to normal. With Kiba weakened, Kenshiro mercilessly pummels the Fang clan patriarch.

Wounded, Kiba asks his sons for support. As several of them charge Kenshiro and Rei only to all be killed by the two men: by this time it became clear that his fatherly 'love' for his sons was nothing more than a pretense. Growing desperate by the second after realizing that Kenshiro has absolutely no intention of letting the bandit patriarch live (nor any of his bandit sons for that matter), Kiba now hastily throws all his remaining sons piecemeal to certain death, in a futile bid to buy time and escape. Kiba's few last remaining sons lose morale and attempt to flee the battle, defying Kiba's orders for them to distract Kenshiro. But Rei intercepts them and slaughters any Fang members who still breathe. Kiba then attempts to attack Kenshiro with a grenade, but it fails as Kenshiro informs him that he already pressed a pressure point on Kiba in anticipation, paralyzing the evil patriarch. The grenade exploded on Kiba, blowing up his arm that held the grenade. But Kiba was surprised that he does not feel any pain - Kenshiro informs the bandit king that it is because he is dying, his sense of pain already dead.

Having lost everything from his sons to his life, Kiba blindly rushes Kenshiro attempting to take him down with him, but Kenshiro dodges the attack and finishes Kiba with his mountain splitting wave attack. Kiba's corpses falls into the lava below, the final member of the Fang family dead.

Kiba Daiō makes an extended cameo as a rival warlord who warns Raoh and Uighur' invading forces not to enter his territory. When Raoh's army enters, Kiba enters with his steel technique, cutting apart many of Raoh's soldiers with his blade, and even biting the head off a soldier who jumped near his head. Kiba Daioh is defeated by Raoh's Hokuto Gōshō Ha technique.

Kiba Daioh is a barbaric man who can't seem to comprehend there are other ways to survive in the world outside of looting and pillaging other humans for food. Kiba Daioh also seems unable to comprehend why anyone would resent him or his sons for their violent criminal ways.

Kiba is shown to have a 'heavy attachment' to his sons and was reduced to tears upon hearing the news of Kemada's death. Kiba Daioh comforted his grieving children over the deaths of their brothers, saying the deceased will be able to rest once their deaths are avenged. It appears Kiba Daioh and his family have a primitive religion of sorts in which those killed cannot reach Heaven until their deaths are avenged. This belief however, ended up hastening the clan's destruction.

However Kiba, like many rogues in the series, is a coward at heart when he is cornered to extreme. After Kenshiro overcame his steel technique, a terrified Kiba Daioh pathetically tried to rally his demoralized sons (who realize too late that with defeats of Madara and Kiba they cannot win against Kenshiro) to stall Kenshiro to facilitate his escape. When questioned, Kiba laughably tried to justify himself by saying that he can create another Fang clan if he lives but if he dies its over as he threw away his children he is supposed to love, to certain death in forms of Kenshiro and Rei. This shows Kiba fails as a father as he ultimately loves his own life more and his sons were nothing more than pawns. 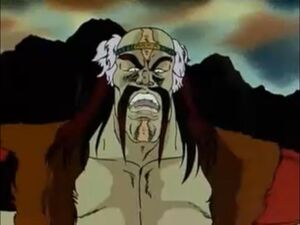 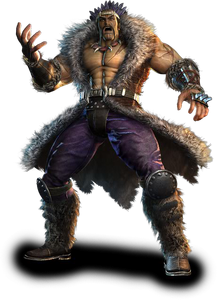 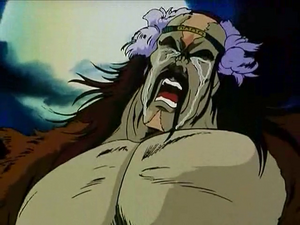 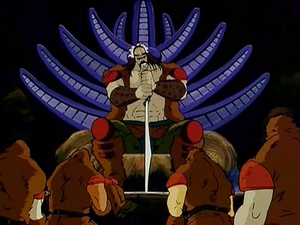 Kiba meeting with his sons 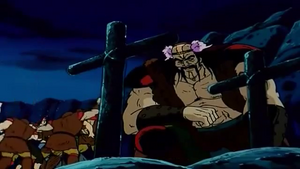 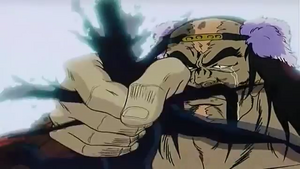 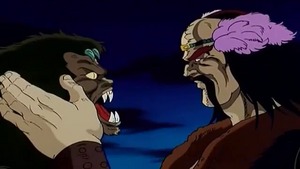 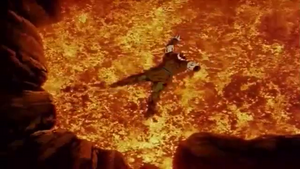 Kiba Daioh is the last of the Fang clan to die 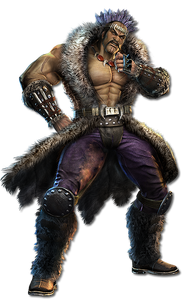