The Godfather of Ghouls

Scaring and terrorizing both the living and the dead.

Ruling over the Spirit World.
Forcing lesser ghosts to scare people
Disciplining those who broke the rules or disobey him.

Banish Casper and the Ghostly Trio to the Spirit World and The Dark.

He was voiced by James Earl Jones in Casper: A Spirited Beginning, Colin Murdock in Casper's Haunted Christmas, and Kevin Michael Richardson in Casper's Scare School.

Kibosh is the manipulative king of the ghosts and the devious ruler of the spirit world, compared to all of the other ghosts in the franchise, he is entirely different: he is green instead of white or blue with red eyes and a deep booming voice, he is also much larger than the other ghosts, and can even use his powers to become a giant.

Kibosh is the most powerful ghost in the world and has a feud with Casper's uncles, due to them skipping his ghost training academy (where ghosts learn how to haunt humans or "fleshies" as the ghosts call them). He also dislikes Casper for being so friendly, since ghosts are supposed to scare humans, so that they would never "rise up against creatures", and as such wants to exile the trio and Casper to either The Dark or The Valley of Shadows.

He is also shown to have a running gag in which he does not pronounce Casper's name right.

Kibosh is the main antagonist in Casper: A Spirited Beginning. He was voiced by James Earl Jones, who is very known for voicing Darth Vader in the Star Wars saga.

In the film, Kibosh is the villainous ruler of the Ghost Central, where he discovers that Casper is missing, by his assistant, Snivel. Because of this, he was enraged by the fact that it may ruin his image by letting any ghost leave without proper schooling. He also claims about the fact that he also lost the Ghostly Trio who was skipping school as well and hopes to find them. He demanded Snivel to find Casper and bring him back.

Later on, he found out by Snivel that the Trio are training Casper, so Casper can take his place as ruler, which made Kibosh temper grew even more than before and demand Snivel to send a full report for any News.

The News became more outrageous to him, when Snivel explained that a human boy was teaching Casper haunting lessons. This forces Kibosh to leave the spirit world to the real world. Kibosh arrived along with Snivel and entrapped the Trio to his cage and set off to find Casper.

Kibosh finally arrived at the Applegate Mansion and just as he seemed relieved that he finally got Casper, a bomb Casper ate exploded inside his body causing the Friendly Ghost to grow enormous when he was trying to save the mansion and his friend Chris from getting blown up. Kibosh was amazed by his technique and Casper explained that the Trio taught him. Kibosh decided to let Casper and the Trio go after the Trio said that they are Casper's uncles when Casper stick up for them and they decide to return the favor.

Kibosh returned once again as the main antagonist in Casper's Haunted Christmas.

He was voiced by Colin Murdock, who later voiced Wenlock in Barbie and the Magic of Pegasus.

In the film, Kibosh and Snivel threaten to banish the four ghosts to The Dark, due to the fact that Casper does not scare humans (Casper replies that he does but Snivel says "But you don't mean to, so it doesn't count"). Kibosh decides that in order for Casper and his uncles to not enter into the Dark, Casper must purposely scare someone till Christmas morning, so he took the Ghostly Trio's haunting license and send all four Ghosts to an old town.

Later, he appeared on a computer screen and placed Snivel to keep an eye on them, to make sure Casper purposely scares someone, and if the Trio try to do something mischievous, Snivel will blow his whistle, so Kibosh will appear.

Later, Casper blew the whistle, for Kibosh to arrive. When Kibosh arrived, the Trio messed around with him thinking that he was a fake, after Casper, Spooky and Poil played a prank on them. They discovered that he was real and Kibosh raged grew as the sun was rising which means Christmas has arrived and Kibosh used his dark magic to send Casper and the Trio along with Spooky and Poil to the dark, but Casper stopped him as he said that he scared someone which was his uncles for faking a Kibosh look a like on them.

However, they were not off the hook yet, unless the Trio give him a Christmas gift. So, the Trio did a show for him which made him laugh and told Snivel to give them their haunting licenses back and warns them that this is not the last time they will see him.

Kibosh reappeared again in Casper's Scare School this time as an anti-hero.

Kibosh also appears without Snivel in the game Casper: Spirit Dimensions (where he tries to take over the world), and plots against Casper's friends everywhere in the world (where he tries to get rid of Casper's human friends, so he can make him into a true scary ghost); he serves as the game's final boss. 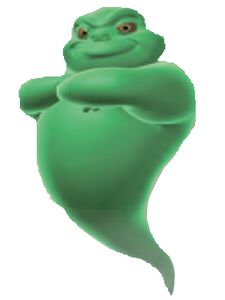 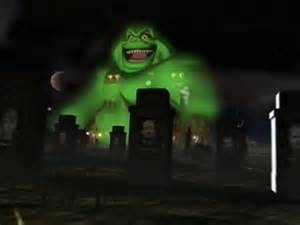 Kibosh in Casper: A Spirited Beginning. 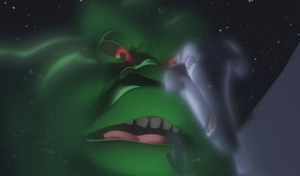