Kickback is an Insecticon in Transformers: Robots in Disguise.

Kickback was one of the many Decepticons imprisoned aboard the Alchemor. When the ship crash-landed on Earth by Megatronus, he was freed from his stasis pod. He met Steeljaw's Pack and tried to join, but the Decepticons wanted to use him as bait to lure the Autobots away from their base and tied him up. The Autobots found and freed him , evoking Kickback to ask them if they needed a sidekick. When they refused, Kickback used his side kick to attack the autobots and escape, then he immediately transformed and drove out of sight.

Later in "Metal Meltdown", Kickback had already encountered another group of Decepticons as they were located in a swamp with the back end section of the Alchemor as their base. He was sent by Scorponok and Glowstrike to scavenge some items that they listed for him to retrieve. He managed to gain some required junk and checked off some of the times (which he also had a My Little Pony toy in his list that he wanted to get) in a garbage area where Steeljaw has approached him. Kickback immediately backed away and recognized Steeljaw as the guy who used Kickback as bait to lure the Autobots. Steeljaw attempts to apologize to Kickback about that ordeal as he extended his hand to Kickback but Kickback declines Steeljaw's apology. Steeljaw then attempts to recruit Kickback in a different team, though Kickback revealed that he is already in a team as they "appreciated" Kickback from the start. Kickback knocks Steeljaw in the air as he drives away. Unwittingly, Kickback led Steeljaw to the Alchemor with the other Decepticons. On his way into the ship, a number of various Decepticons passed him and caught up with two Chompazoids who were guarding the door leading to Scorponok and Glowstrike's room. When Kickback was called in, Saberhorn deliberately bumps Kickback on his left shoulder as he passed by him. Kickback presented his junk to his bosses, who were somewhat unimpressed at his competence. Kickback had asked if he gets some sort of reward, which Glowstrike merely shoots at Kickback to make him leave the room.

Although it is never shown in the show proper, Adam Beechen's website states that Kickback was among the Decepticons on the Alchemor during the events of "Decepticon Island". The Autobots activated a stasis bomb, freezing all of the escaped prisoners. Kickback's stasis pod was then taken back to Cybertron by Optimus Prime, Windblade, and Ratchet. 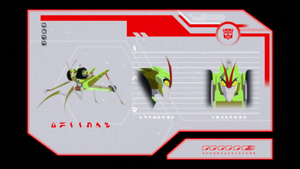 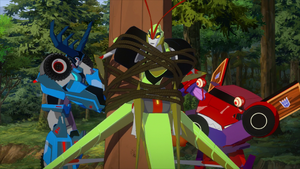 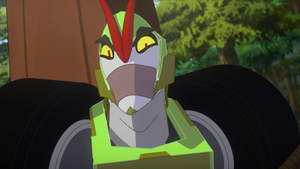 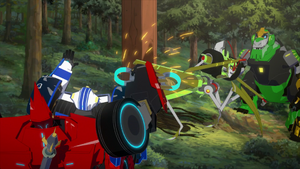 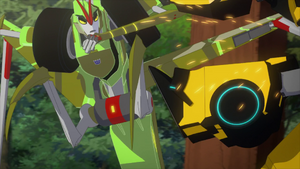 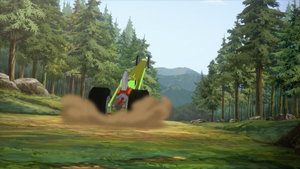 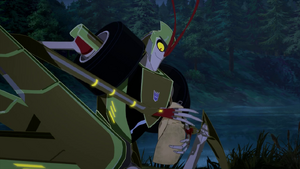 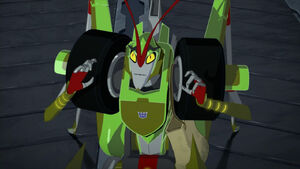