The Money Man is the main antagonist of the Don't Hug Me I'm Scared Kickstarter video "HELP".

The video begins with our favourite puppets being kidnapped by a Nazi-inspired monster, and they are then taken to a torture chamber.

The Monster then gives the Red puppet a card that stated that the audience should send money to them to make a series out of their misery, and if they didn't comply, the Red puppet along with all of his friends will be brutally slaughtered by the nameless Monster.

The "This is It" company also released a video in which the Yellow Puppet appeared with a paper bag over his head, and he's also presumably about to be tortured by the Nazi-inspired Monster, all while begging him to stop.

The monster never speaks. However, he does manage to let out a few grunts of pure rage and irritation.

The Kickstarter Monster(or Money Man) is a brown creature that wears a dark green shirt and a red armband with his symbol.

The Kickstarter Monster is extremely hostile, aggressive, angry, evil, cruel and uncaring towards the protagonists of the DHMIS series. 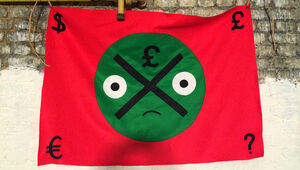 The Unnamed Monster's symbol
Add a photo to this gallery 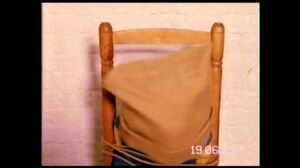 HELP 2
Add a photo to this gallery

Retrieved from "https://villains.fandom.com/wiki/Kickstarter_Monster?oldid=3964956"
Community content is available under CC-BY-SA unless otherwise noted.