Quentin Quire, also known as Kid Omega, was a former pupil of Charles Xavier and a youth who had promising potential, at least in the eyes of Xavier, yet he would become a traitor and formed his own "Omega Gang" with the intent of brutally assaulting and even killing any non-mutants they came across - he is also a "Beyond Omega-Level" mutant, meaning that he is capable of surviving even after physical death: which he has apparently done several times.

Despite always being mentally unstable Kid Omega was actually a pawn of Sublime, who was the true source of the "drug" Kick - thus worsened Kid Omega's mind and his gang members.

Quentin joined the Xavier Institute and was welcomed as a great student, quickly becoming one of Xavier's most prized pupils - in fact Xavier helped Quentin to develop his mutant abilities when they first surfaced, since they originally caused him some distress. Despite his popularity however the Stepford Cuckoos found something disturbing about Quentin from early on, their fears however were dismissed by Emma Frost as little more than jealousy over his success.

Quentin would continue to be a fairly happy student at Xavier Institute until he was contacted by his parents on his birthday and informed he was adopted - this revelation had a severe effect on Quentin's mind as he proceeded to get a haircut based on an anti-mutant newspaper's depiction of a mutant overlord which was published on the year of his birth.

Quentin would then join in on calls for vengeance for the murder of a mutant by the name of Jumbo Carnation and took to wearing clothes based off the mutant overlord depiction - at this point he started to debate with Xavier over the nature of the Institute, questioning whether Xavier would allow any dream other than his own to flourish.

Shortly after this debate Quentin took a gang of like-minded mutants to town - all dressed in similar clothing - and convinced them to take a dangerous drug known as Kick, they then proceeded to harass a group of humans in an alley and brutally assaulted them, going as far as killing some of them.

When the group return to the Institute they are confronted by Xavier but Quentin evades detection - later Quentin takes his newly named "Omega Gang" to a tattooist and have Omega symbols tattooed onto their arms and proceeded to attack the U-Men, when they returned to the Institute the gang ambushed Xavier with a baseball bat before clamping a thought-proof helmet over his head.

Riot At The Institute

The next day sees the Xavier Institute have an "Open Day" for parents and media - Quentin declares it "open season" on humans and begins a riot, some of the students join in but most of the damage is caused by Quentin and his Omega Gang until they are defeated by the X-Men, however the battle against Quentin was not so easy - thankfully for all Xavier managed to break free and confronted Quentin, calling his attempt at revolution "flimsy".

However Quentin was not truly defeated until the Stepford Cuckoos, utilizing the powers of Cereba and Kick, blasted into the area and confronted him - Quentin admitted he staged this event to try and impress Sophie (a member of the Stepford Cuckoos), the girls expressed their disgust at Quentin and his actions before defeating him with a massive telekinetic attack. Sadly Sophie died as a result of this battle and Emma Frost was quick to condemn Quentin for his recklessness - Quentin later died due to his psychic powers overloading as a result of his abuse of the Kick drug, however due to his powerful psychic powers he is still alive on a "higher plane" of existence and he would appear in several stories afterwards as a villain.

Quentin returned in Phoenix:Endsong, although his physical body was destroyed his mind was revealed to be kept in a semi-conscious form in Beast's lab, where it was eventually brought back to full consciousness and then given a body by the Phoenix Force returning to Earth. Quentin then attempted to resurrect his Sophie. Unfortunately Quentin was only able to use his telekinesis to reconstruct her body, he did not possess the ability to bring her back from the dead. With the help of the Phoenix Force however she was returned to life, however Sophie - still repulsed by Quentin and his actions - died shortly after, seeming to prefer death.

Some time later in the events of Nation X Beast brings Quentin's container to his lab on Utopia after the X-Mansion is abandoned. Finding life on a higher plane to be "boring" Quentin revives himself and decides to become a villain again and secretly destroy Utopia, claiming that the X-Men stole his idea to create a mutant nation. He elects to make his endeavor a game and selects Martha to be his arch-nemesis and gives her seven and a half minutes to stop him. Martha attempts to alert the X-Men and locate Quentin, but he manages to intercept and taunt her at each attempt, ultimately smashing her container and leaving her to die. Martha realizes that Quentin has infiltrated Cerebra to destroy the island and attempted to take revenge on the Cuckoos by putting them in a mental loop. Martha manages to break the Cuckoos free, who quickly defeat him.

Quentin is a  "Beyond Omega-Level" mutant - the highest category known in the Marvel universe, simply put this means Quentin is above even Xavier in strength and could achieve potentially limitless power if he so desired, he can also exist outside the physical realm in an incorporeal yet fully sentient state. 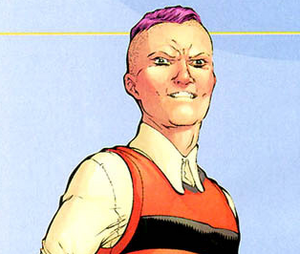