Have the Golden Guard killed (failed).

She is voiced by Mela Lee.

Kikimora is a very small demon with red skin, big ears, and blue hair in a ponytail that is shaped like two claws on both sides. She has long sharp talons for feet and wears an emperor's coven uniform that covers her mouth.

She first appeared at the end of "Covention", where she reports to Lilith about her mission to capture Eda for the Emperor.

She later appeared in "Agony of a Witch", where she gives tours of the Emperor's castle to the students of Hexside and later mocks Lilith for failing to capture Eda.

She then appeared in "Young Blood, Old Souls", where she prepares to turn Eda to stone by order of the Emperor and gets furious with Warden Wrath for letting Luz get past him. She is about to turn Eda to stone, but lets her go along with Lilith and King after Luz threatens her with a fire spell. At the end of the episode, she promises Emperor Belos that they will capture Eda, but Belos states that he's already got that planned then turns her attention to the portal to the human realm which Belos' is rebuilding.

Her next appearance was in "Hunting Palisman," in which she served as the episode's main antagonist. In it, she is seen eavesdropping a conversation between the Golden Guard and Emperor Belos, making her envious of the Golden Guard's attention, which leads her to later take advantage of his airship crashing and faking his death. Later, Kikimora is injured and her vision becomes blurry as she attempts to kill two people, of whom unbeknownst to her were Luz and the Golden Guard. The Guard later returns to the Emperor's Castle, which leaves Kikimora furious.

Her next appearance is in the episode "Follies at the Coven Day Parade", where at the beginning, she is speaking to her family on the phone and talking about how she'd like to visit them but feels like she has to attend the annual Coven Day Parade, and therefore, can't make it. However, Luz overhears this, and despite their previous interactions, she sympathizes with her since her situation is similar to her own and offers to help her by staging a fake kidnapping of her and Raine during the parade (the latter so she can reunite her with Eda). During the parade, Luz successfully "kidnaps" her while King and Hooty distract the guards. However, Terra Snapdragon, the leader of the Plant Coven, goes after them and entices her by deliberately mentioning in earshot of them that she was finally going to receive her long-coveted promotion. They manage to escape from her with help from Amity, but then just as they're seeing her off at the docks so she can visit her family in Palm Stings, Kikimora turns on them as a result of wanting to receive her promotion. However, just after she gets into a battle with Luz and Amity, she is tied down by Terra, since hurting them and causing a riot contradicts Emperor Belos' plans. She then reveals the whole thing was a test to prove her loyalty and that she passed, but also reveals the "promotion" was simply getting to live before dragging her back to the parade. She is then present while Belos makes an announcement about the Day of Unity at the end of parade, though with a somber look on her face, indicating she may be contemplating if she made the right decision.

In "Clouds on the Horizon", its reveal that Kikimora have been demoted to Cargo Pilot. 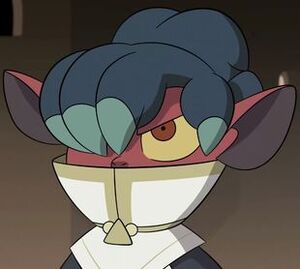 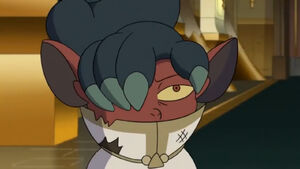 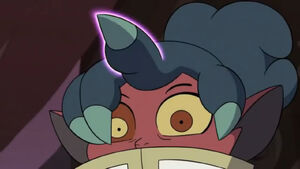 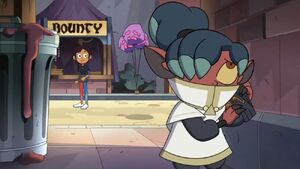 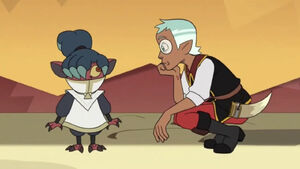 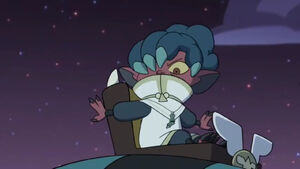 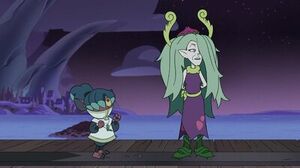