Scientist of the Frieza Force

Serve Frieza and help him.

He was voiced by Sonny Franks in the Funimation dub, and by Masami Kikuchi in the Japanese version.

Kikono has served the Frieza Force since King Cold's time as ruler, Kikono is a brilliant scientist who invented the scouters, spaceships and Battle Armor uniforms. He is present with his supreiors Frieza and King Cold when they visit Planet Vegeta to announce that Frieza will be taking King Cold's place as leader of his father's empire.

5 years later, Kikono accompanies Frieza, and discusses with him on their way to Planet Vegeta about the threats that the Saiyans' pride can pose to the Frieza Force, and the possibility that there may be a warrior as strong as the legends described of the legendary Super Saiyan or Super Saiyan God among them. In the end of their conversation, Frieza has decided to wipe out the Saiyan race.

Inside Frieza's spaceship, Kikono relays a message to Frieza that Bulma has collected the 6 Dragon Balls along with having a Dragon Radar, now under the possession of Frieza's hired burglars as they use the radar to track down the last ball in the Ice Continent. This pleases Frieza and Kikono suggests that they should head to Earth right now to retrieve the balls as soon as possible but Frieza says that they should wait as they may be sensed by Earth's Saiyans if they come to early due to Frieza's power level as they don't need scouters to sense Frieza's presence. Kikono then asks Frieza if his wish is leaning toward immortality as he always wanted, but Frieza's experience in Hell taught him that immortality is not all it is cracked up to be especially when a person couldn't do anything. Kikono suggests he wish for invincibility instead, but Frieza thinks that would be boring. Berryblue then guesses that Frieza wants to use his wish to grow taller and Frieza's reaction confirms it much to Kikono's disbelief since Berryblue has witnessed Frieza's ruthlessness with people who disparage his stature, warning Kikono to be careful. Kikono comes to an agreement with Frieza not to tell anyone about what he's using the wish for. Frieza reveals he wishes to be 5 centimeters taller but Kikono then asks why Frieza doesn't just use his taller second form, but Frieza insistently wants to be taller in his true form. Kikono finally asks "Why only 5 centimeters?", with Frieza responding that anything more would be "too noticeable".

3 days after the battle involving Goku and Vegeta against Broly, which Frieza was also involved, Kikono informs Frieza that the traitors of his army, Cheelai and Lemo, had sympathized with Broly after being put at gunpoint by Cheelai when he was forced into telling her how to use the Dragon Balls along with having learned Cheelai had used the Dragon Balls that Frieza's hired burglars had stolen from Bulma to wish Broly to be sent back to Planet Vampa. Frieza still thinks that Broly could make a good weapon and mighty warrior for the Frieza Force if he were to learn how to control his temper by letting Cheelai and Lemo do the hard work for him. Kikono asks if that would work and Frieza replies that it would work since Broly is a force to be reckon with due to his abnormal power level and Frieza can use Broly in hopes of defeating Goku and Vegeta in battle.

Kikono is a short, diminutive, yellow alien with a relatively big head with two antenna on top. He wears a variant of the latest model of Frieza Force Battle Armor. His armor has green shoulder plates, and a green stomach plate. The rest of his armor is black. Under his armor he has a dark green robe that covers his entire lower body. 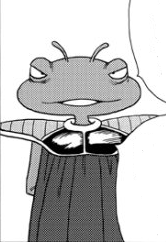 Kikono in Dragon Ball Minus. 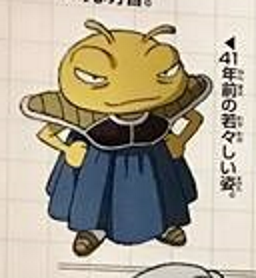 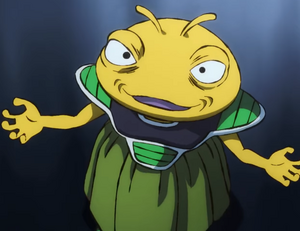