Attempting to destroy the Earth.

New Joyful Knight Killborero is the new general in the Deboth Army created to replace Candelilla and a supporting antagonist in Zyuden Sentai Kyoryuger.

Killborero was created by Chaos to replace Candelilla as the Deboth Army's Joyful Knight after Chaos fired her and later ordered her executed.

Killborero initially confronted the Kyoryugers disguised in a white cloak, but later revealed his true form.

During the final battle he was defeated by Kyoryu Violet utilizing the Plezu-Oh's finisher, but he managed to survive. He later attacked the Spirit Base, but was ultimately finished off when Kyoryu Black, Blue and Green teamed up against him and him destroyed with the Slash Shield Shot.

He wields the Apparappa trumpet, with which he can utilize sound-based attacks with Icerondo or by himself. 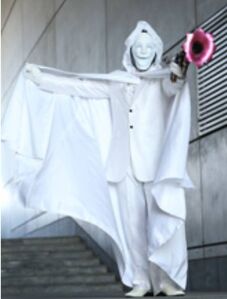