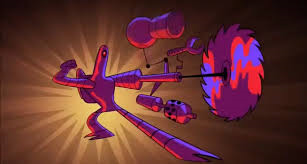 Killbot 86 is a recurring villain in Wander Over Yonder. He, along with Rongruffle and the Potted Plant were the three best bounty hunters in the Yonder Galaxy and the three worked for Lord Hater to capture Wander and Sylvia, but Commander Peepers kept messing with their plans.

He has a robotic eye that shoots teleporter rays and he planned to use it to teleport Wander and Sylvia into Hater's ship.

After Peepers got rid of Rongruffle in her attempt to take his place as Hater's second-in-command, he now had to do same thing with Killbot86. He was going to shoot his teleporter ray to Wander and Sylvia when Peepers jump to him and hold him tightly making he lost control of his rays and shoot to tourists. Until one of his rays were into a house of mirrors and, after bounce between these, were back to him thus teleporting him to Hater's ship who fired him thinking he was so incompetent.

Retrieved from "https://villains.fandom.com/wiki/Killbot_86?oldid=3726481"
Community content is available under CC-BY-SA unless otherwise noted.