Ruler of the Blood Tribe

Recreate the Pandora Box and use it to destroy the entire universe along with himself.

He is the older brother of Evolt and the tyrannical alien overlord who instigated Blood Tribe's universal campaign of destruction. Following his brother's demise, Killbus comes to Earth in search of Ryuga Banjou to use him to recreate the Pandora Box and end all life in the universe including himself so he can die in an "awesome" way.

Killbus was voiced by Anri Katsu. In his human guise of Satoshi Kakizaki, he was portrayed by Gaku Shindo, who is best known for his role as Sid Bamick/Special Duty Officer Barizorg from Kaizoku Sentai Gokaiger. When he briefly takes the form of Sento Kiryu, Killbus was portrayed by Atsuhiro Inukai.

The ruthless emperor of the Blood Tribe, Killbus' lust for conquest led him to destroy Planet Blood, the homeworld of the Blood Tribe, and send out the forces of his empire to destroy and consume more planets. However, right before Killbus destroyed his homeworld, his younger brother Evolt stole their planet's power source, the Pandora Box, in order to use it to help increase his own power so he could destroy and remake the universe. Requiring the Pandora Box for his own plans of universal destruction, Killbus pursued Evolt, consuming many planets along the way. Killbus' power eventually rose to the point where he was capable of transforming into a stronger form than the Evol Driver with its inferior knockoff, the Build Driver.

After the World of Build was merged with the main Kamen Rider world to create a new world, Killbus arrived in the new world through the White Pandora Panel in Sento's laboratory and introduces himself to Sento Kiryu as Evolt's brother after copying Sento's appearance. Infecting Sento with a deadly poison, Killbus switches his form to that of dancer Satoshi Kakizaki after seeing him on TV before heading off with the Build Driver and leaving Sento for dead.

Killbus then goes to confront Ryuga Banjou and transforms into Kamen Rider Build to face him. Ryuga transforms into Kamen Rider Cross-Z as Killbus attacks him and attempts to fight him off but is overwhelmed by Killbus' sheer strength. Killbus beats Ryuga out of his transformation and uses him to bring back the Pandora Panels, with which he intends to use to destroy the entire universe, including himself.

However, before he can do anything with it, his younger brother Evolt emerges from Ryuga as Blood Stalk, having survived the merging of the World of Build and main Kamen Rider World by attaching a fraction of his DNA onto Ryuga. Stalk fights his brother off before grabbing the Pandora Panels and teleporting away with Ryuga and Yui. However, Killbus finds Ryuga left behind the Spider-Type Pet Robot, which Killbus turns into the Killbaspider for him to use to transform.

Killbus later shows up to confront Stalk, Ryuga and Yui in the backup Faust lair Stalk set up. Killbus summons the Spider Fullbottle out of thin air and reveals his Kamen Rider form to them by inserting it and the Killbaspider into the Build Driver to transform into Kamen Rider Killbus. He also snatches the White Pandora Panel from them and turns it into a device to recreate the Pandora Box with. After Ryuga transforms into Kamen Rider Cross-Z Charge, him and Blood Stalk face off against Kamen Rider Killbus, but Killbus overpowers them both. After trapping Stalk in spider web, Killbus uses his Killbus Spider Finish to finish off his brother, before absorbing his DNA into himself via the White Pandora Panel. Before he can kill Ryuga however Kamen Riders Grease and Rogue show up and push Killbus back before teleporting away with Ryuga and Yui.

Killbus later attacks a news team and issues a challenge to Ryuga to come face him at the spot where they first met. Some time later, Ryuga shows up to face him alongside Kazumi and Gentoku. Tossing off his shirt, Killbus transforms into his Kamen Rider form and shifts the arena to a barren plain. After his three opponents assume their Kamen Rider forms, Killbus splits his DNA into six Clone Smash (two Strong Clone Smash, two Flying Clone Smash and two Stretch Clone Smash) fight Kamen Riders Grease and Rogue while he fights Kamen Rider Cross-Z Magma. However, as the two face off Kamen Rider Evol emerges from Ryuga and reveals he was brought back thanks to Sento causing him to re-emerge from Ryuga's Blood Tribe genes.

Killbus thus faces off against Kamen Riders Cross-Z Magma and Evol but despite their combined strength they are unable to match up to Killbus, who beats Ryuga out of his transformation and critically wounds Evol. Just then, Yui and Sawa Takigawa show up to deliver Ryuga the Muscle Galaxy Fullbottle, Killbus causes their car to crash and Sawa is knocked out. Ryuga attempts to use the Muscle Galaxy Bottle to transform but is unable to, at least until Evol threatens Yui and gives Ryuga the determination he needs to use it. After Ryuga inserts the Muscle Galaxy Bottle into his Build Driver, Evol merges with him as he is transforming, causing them both to become Kamen Rider Cross-Z Evol.

Cross-Z Evol goes to fight Kamen Rider Killbus, but Killbus still manages to overpower them at first. However, from his desire to protect his friends, Ryuga musters up the strength to stand up to Killbus. Cross-Z Evol then dishes out several powerful attacks against Killbus, overwhelming the Blood Tribe King and sending him flying into the ground. Before Killbus can recover, Cross-Z Evol unleashes his Muscle Galaxy finisher on him, finally killing Killbus.

Like the others from the Blood Tribe, Killbus is cruel, deadly and destructive. However, in contrast to his younger brother Evolt, Killbus is less concerned with obtaining more power and more with just causing destruction for the sake of it, with his brother describing him as a "hedonist who loves to destroy". One trait Killbus does appear to share with Evolt is a casual and faux friendly demeanor, displayed when Killbus greeted his brother after he returned and said that he's been "dying to meet [him]" again. Killbus also appears to be rather vain, as he copied the appearance of Satoshi Kakizaki because he took a liking to his flamboyance and stylishness. 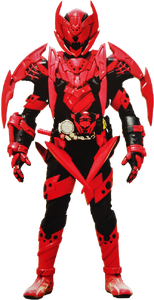 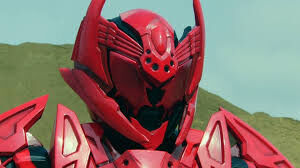 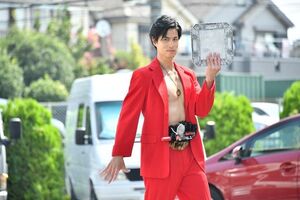 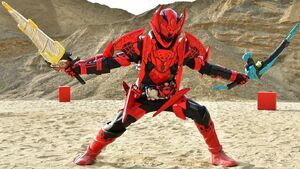 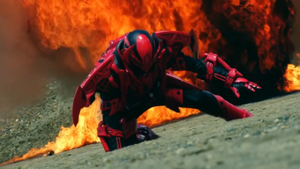 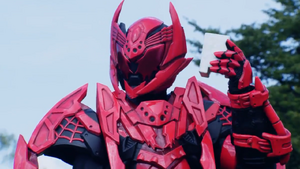