Killer (All Dogs Go to Heaven)

Cowardly Minion
Killer is the secondary antagonist in All Dogs Go to Heaven, later an anti-hero in the TV series and the series finale An All Dogs Christmas Carol. He is Carface's minion.

He was voiced by the late Charles Nelson Reilly, who also played King Llort and Hunch.

Killer is a slender tan Schnoodle with slender legs and a brief potbelly. He wears a black spiked collar and a pair of spectacles.

Killer is really compliant, pusillanimous, finicky, and neurotic, and for each of his failures, Carface tries to have him killed but he manages to convince him not to each time. He is also his messenger, he stays out of the action in the final battle and gets away from the hideout, after Charlie sacrifices himself saving Anne Marie. Killer makes sure she makes it to shore and reunites her with her newly adoptive parents. However, despite his fearfulness, he can be slightly rebarbative and gruesome, wanting to squeeze Charlie's head between a pair of pliers as well as owning a ray gun, despite not knowing how to use it. Despite this, he does have a softer side. For example, he does show that he dislikes Carface's treatment of Anne Marie. Furthermore, he even risked getting in trouble with his fellow dogs by carrying her to the shore after Charile and Carface's demises.

He is not seen in the sequel, but he returns for the TV series as Carface's partner in crime. In the series, Carface doesn't abuse him as much as he did in the first movie and never tries to slaughter him.

In the series' finale, we see how Killer celebrates Christmas. It is shown in the musical number "I Always Get Emotional at Christmas Time" that he has a wife and son, but neither relative is ever mentioned by name, nor do they ever speak. In fact, they only make a cameo appearance.

After finding out that Charlie Barkin is back, Killer informs this to Carface, and is seen in the shadows plotting Charlie's demise with Carface's other minions later on. He assists Carface in Charlie's demise by getting him (and himself) drunk at the Mardi Gras, blindfolds the drunken Charlie and supports his boss run him over with a car and off the docks. Not too much later, he and Carface are forcing Anne-Marie into talking to a nearby rat, declining her access outside, until Charlie gets her out. Much later, Carface is about to feed Killer to some piranhas, when the Schnoodle told his boss about a ray gun, to which Carface concurs. The next day, Carface and Killer attempt to shoot Charlie and Anne-Marie, but Killer misfires, causing the pit bull to shout, "Morons. I'm surrounded by morons."  Well into the climax, Carface impolitely keeps telling Killer to shut up, as if he doesn't need him any longer, and Carface fights Charlie on his own. The last Killer is seen in the movie, is when he pushes Anne-Marie away from the sinking boat and leaves the scene afterwards, reformed while Anne-Marie is saved by authorities and brought to Kate and Harold's house who adopted her along with Itchy, Flo and her puppies and cured her illness soon after. Killer's final fate remains unknown after this, as he is not seen again for the rest of the film

Killer is not seen or mentioned once in the second movie, as Carface is the lackey to Red instead, as Carface is no longer active as a Big Bad and remains solely as a Dragon.

All Dogs Go to Heaven: The Series

Killer reappears in the series, serving as Carface's bumbling minion one more time. However, in one episode, Sidekicked, Carface is absent, leaving Killer to have a turn to be the main villain, as a day in the limelight.

An All Dogs Christmas Carol

In the beginning, Killer just followed along with Carface and did what Carface told him to do. But at the end, he gives a true heart. Killer is in the Christmas spirit and so is Carface. 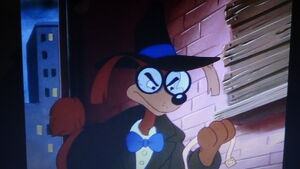 Killer in the TV series. 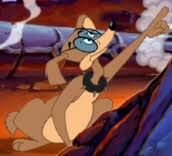 Killer in the third film. 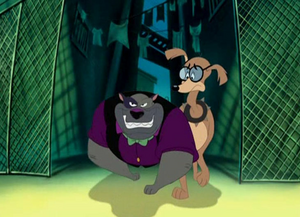