Kill anyone who tries to help Lori (mostly succeeded).

Enigmatic Serial Killer
The nameless killer is the main antagonist of the 2016 horror short film Blood Trail. He is a cannibal who would kidnap and kill young women.

He was portrayed by Eric Hale.

At the beginning of the film, the killer kidnaps a young woman called Lori. He then captures another woman and starts off by eating parts of her. He proceeds to kill the woman. Lori, on the other hand, manages to escape from the killer (though not without him stabbing her), but this leads to him going on an obsessive hunt for her. When Lori runs to a doctor’s house for help, the killer stabs the doctor’s fiancée‘s brother to death before forcing the fiancée to watch as he kills the doctor. The killer knocks out the doctor’s fiancée, binds her with chains, and continues hunting for Lori.

At the end, Lori incapacitates the killer and strangles him to death before dying from her injuries. However, the final scene implies that the killer is still alive and out there. 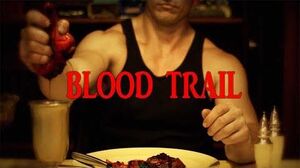