Villains Wiki
Register
Don't have an account?
Sign In
Advertisement
in: One Piece Villains, Pirates, Right-Hand,
and 31 more

Helping the Straw Hat Pirates and the Heart Pirates to overthrow Kaido and Big Mom.

Killer is an infamous pirate who is a part of the Kid Pirates. He is the right-hand to Eustass Kid. Before the time-skip he had a bounty of 160,000,000 berries and it increased to 200,000,000 berries after the time-skip. Since Kaido broke up Kid's alliance with Basil Hawkins and Scratchmen Apoo, Killer ate an artificial SMILE fruit and became an assassin for Kurozumi Orochi called Kamazo. He is also a rival of Roronoa Zoro.

Killer is a muscular man with light-colored skin and long blonde hair. He wears a blue and white colored mask with multiple holes embedded in it. Pre-time skip, he wears a polka-dotted long-sleeve shirt and a blue pants. Post-time skip he wears a blue short-sleeve shirt, blue pants with a sash around it, large gloves around his arm, and dark-colored shoes.

Since becoming Kamazo, Killer does not wears a mask revealing his face with almond-shaped eyes, a pointed nose, and a dark colored lips. He constantly sports a smile on his face as a result from eating a SMILE fruit. He also wears dark-colored robes instead of the shirt and pants he would wear when he was a pirate.

Unlike Eustass Kid who can be temperamental, Killer is revealed to be calm and relaxed in most of his appearances. He does not speak too often and is loyal to his captain, Kid, and the pirate crew. Killer is more pragmatic than his captain by how he would try to break up a dispute Kid had with an alliance member. Despite his calm temperament, Killer like his captain is shown to be extremely violent by how he participated in attacking and crucifying pirates in the New World. Like his captain and his crew, Killer is shown to be homicidal given his reputation for causing violence along with his captain. Despite his collected and pragmatic behavior he have shown, Killer is shown to be shocked when Kaido crash-land on their pirate alliance base.

After undergoing changes from his time in Wano, Killer as Kamazo shows that he is brutal and violent. He has no qualms in attempting to murder a woman and a child, Hiyori and Toko, on the orders of Orochi. Kamazo shows that he is arrogant and believes that he is a strong fighter. He is willing to spare other people if they do not interfere in his mission, but he will try to kill them if they try to get in his way such as attempting to kill Hiyori for protecting Toko or attempting to kill Zoro for protecting Hiyori and Toko.

After eating the SMILE fruit, Killer can only laugh and smile. Killer is shown tearing up from laughing because according to Kid, Killer hated his own laughter to the point he wears a mask to hide his face and stopped laughing.

As the right-hand to Eustass Kid, Killer is known to be a strong fighter within the Kid Pirates. He is shown to have fast reflexes and a fast reaction time. Killer wields sharp blades that he uses when he faces his opponents.

When Killer fights Zoro in Wano as Kamazo, he is shown to be a challenging fighter in battle. He wields two large scythes that allows him to strike down his targets in an instant. He is able to fight on the same level as Roronoa Zoro, an experienced swordsman, and is able to injure him. Killer's fast reflexes and speed in battle makes it hard for his opponent to hit him.

When he was younger, Killer would wear a mask because he did not like his own laughter. He would attack anyone who made fun of his laughter and chose to stop laughing as a result. At some point, Kiler joined the Kid Pirates as Eustass Kid's right-hand man and would gain a large bounty for his crimes against society. For his crimes, Killer's bounty reached 160,000,000 berries.

Killer and his crew manages to witness the conclusion of the Marineford War from afar on their ship. Killer and his crew manages to make it to the new world. Many days after the Marineford War, the Kid Pirates attacks a pirate crew by crucifying them and Killer is present when Kid makes an example out of pirates he considers weak in the new world.

During the time skip, the Kid Pirates have journeyed to Big Mom's territory and faced off against her forces until they had to leave. They also attack some of her ships. At some point, Kid ends up losing his arm when he encounters the Red Hair Pirates. Kid and Killer also gets into an alliance with Scratchmen Apoo and Basil Hawkins in order to work together to against Shanks, the leader of the Red Hair Pirates. Because of his actions in the new world, Killer's bounty raised to 200,000,000 berries.

Killer and Kid are seen talking among one another with Apoo and Hawkins in their alliance. Killer ends up breaking up a dispute that occurred between his captain and Apoo Scratchmen because of the mess in one of the rooms. Killer and his captain also witness Luffy defeating Caesar in a live broadcasting video.

The alliance got news of Doflamingo's defeat and arrest by Luffy and Law in the newspaper. They realize that Luffy and Law are in an alliance aiming to take down Kaido.

Moments later, Killer and his allies hear a loud crash in their alliance headquarters. Killer and the other alliance members are shocked to see Kaido appear in front of them.

After Kaido crash-lands on their island, the alliance breaks up with Hawkins and Apoo joining Kaido's side and Eustass Kid getting severely beatened by Kaido and imprisoned. Killer along with Kid and Hawkins makes it to Wano Country. At some point under unknown circumstances, Killer eats a SMILE devil fruit which caused him to lose the ability to express anger and sorrow. He takes on the alias Kamazo the Manslayer. Killer gains a reputation in Wano Country for killing multiple people in the Flower Capital. However, it is revealed that he works under Kurozumi Orochi as an assassin who would go after people the latter stood against.

After the incident at the banquet, Orochi sends Killer to go after Toko for accidentally laughing at him. Killer pursues Toko who was protected by Hiyori all the way to the Ringo region. Killer is close to killing Toko and Hiyori until Zoro prevents him from cutting them down. Killer introduces himself to Zoro and tells him about his mission. He warns Zoro to get out of his way but the latter refuses and the two gets into battle. As they fight, Zoro is able to keep up with Killer until Gyukimaru attempts to attack Zoro for being distracted. As a result, Killer strikes Zoro near the chest with his scythe. Zoro immediately regains composure from the blow and defeats Kamazo by using one of Killer's scythes and two of his own swords in a powerful attack.

Since he fail to complete the task he was given, Killer was taken by the Beasts Pirates to Udon Prison along with his captain, Eustass Kid, (whom escaped from Udon prison) earlier. Kid wants to know what Kaido and Orochi did to Killer to make him smile and laugh all the time but Killer begins to tear up as he continues to laughs. Queen have both Killer and Kid tortured by attempting to drown them.

When Big Mom was swinging Queen around, Killer and Kid were saved from drowning when Queen crashed into the contraption holding them and knocked them out of the water. Raizo gives Kid the keys and he manages to unchain Killer and himself. Kid refuses Luffy's offer to be his ally and breaks out of Udon prison with Killer.

Killer and Kid later reunited with their crewmates and joined the battle against the Beasts Pirates during the Fire Festival.

After the Straw Hats took over the port in front of Onigashima, the Kid Pirates promised to be the ones who would defeat Kaido.

After Kid's brief scuffle with Apoo, the situation became more chaotic as a Number entered the fray. As Killer, Kid, Luffy, and Zoro ran to the castle, Killer told the others how they can avoid Apoo's attacks. Inside the castle, Killer and Kid got separated from their allies and found themselves fighting against several Gifters. 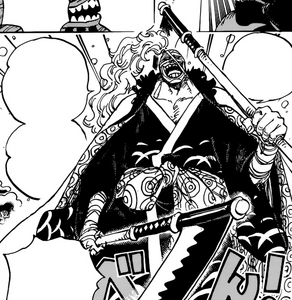 Killer without his mask on.