The Killer Egg is a recurring antagonist in Huevocartoon. He iss considered a bad guy by the other eggs, but in reality, he is a peaceful person who wants to make friends but for some reason ends up murdering or insulting him.

To tell the truth, the Killer Egg is not really a bad person, but suffers a severe personality disorder that makes him lose his sense of sanity, becoming a cruel and vengeful violent psychopath, caused by concerns that bother him like being under pressure or psychological stress.

All this inadvertently makes him look like an antisocial next to his peers, wishing he could not unleash the same unstable attitude and socializing normally with friends.

The Killer Egg is considered a fearsome criminal killer for the other eggs, but in reality, it is a cordial and peaceful person. He has never been able to kill anyone, but for some reason, everyone is afraid of him and ends up murdering him with a gun (although he can hear groans and complaints).

He is gray and wears a silver hockey mask and carries with him a "utility knife" (this aspect parodies Jason Voorhees). In Mr. Dongo Show he rebelled that he is a murderer because there were no more jobs in huevocartoon. He participated in Eggbrother VIP and was expelled by his companions in revenge for its violence.

Additionally to paying homage to the classic assassins of the genre slasher, also has made parodies in which it interprets to another variety of monsters of the terror genre like Billy the doll from Saw trilogy, Samara Morgan of The Ring and It the Clown, although it does not obtain its mission of catch or kill the victims, ending in a rave but comic failure. 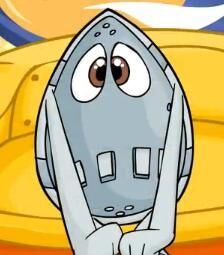 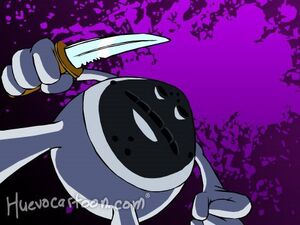 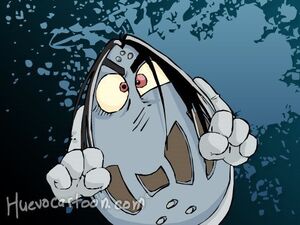 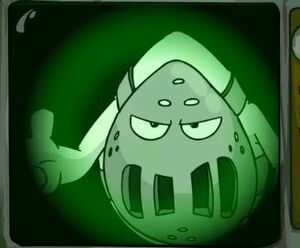 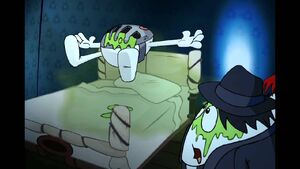 The Killer Egg in The Exorcist parody. 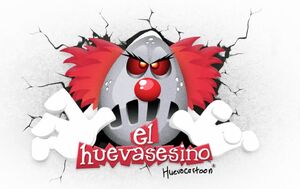 The Killer Egg as Pennywise.
Add a photo to this gallery 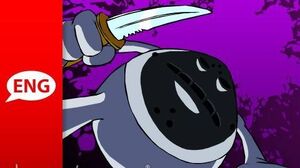 Retrieved from "https://villains.fandom.com/wiki/Killer_Egg?oldid=4141673"
Community content is available under CC-BY-SA unless otherwise noted.