Killer Frost is a criminally insane supervillainess from DC Comics, who (as her name implies) has control over the cold - she is a mass murderer and very dangerous (even by superviilain standards): as well as appearing in comic books she has been involved in the DC animated universe and video-games such as Justice League Heroes.

Crystal Frost first appeared in Firestorm #3 (June 1978). While Crystal Frost was studying to be a scientist in Hudson University, she fell in love with her teacher, Martin Stein. While working on a project in the Arctic, Frost was upset to learn that Stein did not reciprocate her feelings. Frost accidentally locked herself in a thermafrost chamber, but somehow survived. She was transformed in a way that she was able to absorb heat from a living being and project cold and ice. Calling herself Killer Frost, she began her murderous crusade against men and clashed with Firestorm on many occasions. Frost eventually died after she absorbed too much energy from Firestorm.

Crystal has been identified as one of the deceased entombed below the Hall of Justice. Her body was reanimated as a Black Lantern.

Dr. Louise Lincoln first appeared in Firestorm (Volume 2) # 21 (1984). She was a colleague and friend to Crystal Frost. After her friend died, she decided to repeat the experiment as a last respect to her former mentor, and became the new Killer Frost. She became just as ruthless as her predecessor and began her own personal vendetta against Firestorm, who she blamed for Frost's death. She briefly served as a member of the Suicide Squad and sold her soul to Neron for more power.

During the Underworld Unleashed event, Killer Frost attacked Hawaii, freezing part of the islands before being stopped by Superboy and Knockout.

Killer Frost was later freed by Effigy and the two had a brief flirtatious partnership before she was apprehended by Green Lantern.

Killer Frost was one of many mega-villains seeking to earn a $1 billion reward offered by President Lex Luthor to sanction Superman and Batman, whom he considered treasonous. She teamed with Mister Freeze, Icicle, and Captain Cold in an attempt to ambush the two heroes, but all four were defeated. It was later discover that this ice-themed team of villains was being mind controlled by Gorilla Grodd.

Doctor Light (Arthur Light) hired Killer Frost and Mirror Master to attack Green Arrow and Black Lightning at a hospital in Chicago, Illinois where Kimiyo Hoshi was being held. Green Arrow stopped Killer Frost by firing an arrow filled with Greek fire into her thigh. Unable to absorb the heat from the arrow, she was soundly defeated by Green Arrow.

One Year Later and Countdown

Killer Frost was later seen in the Justice League of America Wedding Special, battling the new Firestorm, until Lex Luthor, Joker and Cheetah arrived, subdued Firestorm, and invited her to join the new Injustice League.

Dr. Caitlin Snow appears as a supporting protagonist in the TV series The Flash and a guest star in Arrow, played by Danielle Panabaker. She is featured as a scientist at S.T.A.R. Labs and employee of Harrison Wells, as well as girlfriend of Ronnie Raymond/Firestorm. In the Season 1 finale of The Flash "Fast Enough", she marries Ronnie. Later, when Barry is running through the Particle Accelerator to go back in time, a brief shot of Snow in an ice-like dress is seen, suggesting that she would become the character.

In Season 2, while Snow herself did not become Killer Frost, her Earth Two counterpart had become the character, being a minion of Zoom and appearing in the episodes "Welcome to Earth-2" and "Escape from Earth-2". She is the wife of Ronnie Raymond from Earth-2, who is known as Deathstorm. After Zoom kills him, Snow is convinced by Cisco (Earth-1) and Barry Allen (Earth-2) to help them rescue the Flash/Barry Allen (Earth-1) from Zoom's hideout. After Cisco, Barry, Wells (Earth-2) and Jesse Quick left for Earth-1, Cisco started fearing that Snow from Earth-1 was starting to become like her. In the episode "Back to Normal", she was shown to be imprisoned by Zoom in his lair. She tricks the then-trapped Earth-1 Caitlin into helping her escape; when she was about to kill her unpowered self by hurling an icicle at her, Zoom arrived, grabbed the icicle and stabbed Frost with it, killing her.

In Season 3, during the briefly-displayed Flashpoint timeline, Caitlin served as an ophthalmologist. After Barry restores the timeline from Flashpoint, the world had been affected by small, but important changes, such as Cisco's brother Dante being killed by a drunk driver and Iris and Joe West having a strained relationship. Barry seemed to think that Caitlin was the least-affected by the timeline alteration; however, she had actually become a meta-human with the same powers as her Earth-2 counterpart, fearing that she would be transforming into her. She goes to her scientist mother in an attempt to understand what was happening to her, but found out that the more she used her powers, the more she'd be like Killer Frost. Her powers are going out of control, freezing surfaces when she doesn't want to. 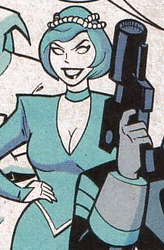 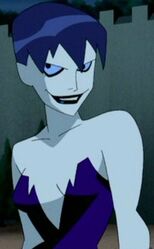 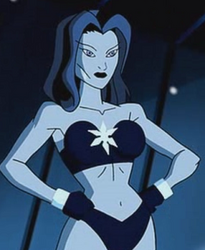 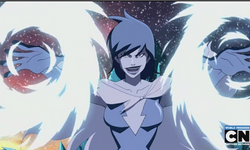 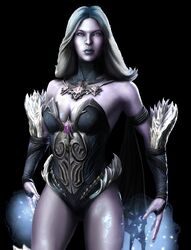 Killer Frost in Injustice Gods Among Us

Killer Frost in The Flash
Add a photo to this gallery 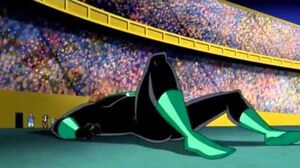 Justice League VS Secret Society
Add a photo to this gallery
Retrieved from "https://villains.fandom.com/wiki/Killer_Frost?oldid=1839368"
Community content is available under CC-BY-SA unless otherwise noted.