Henchwoman for Reverb and Zoom

Killer Frost is a meta-human from Earth-2 and the wife of Deathstorm. Opposed to her Earth-1 counterpart Caitlin Snow, Killer Frost is evil and works for Zoom.

She is portrayed by Danielle Panabaker.

Caitlin had a brother, Charlie, who died at some point in her youth. Charlie's death deeply affected Caitlin's mother and she became cold and unfriendly.

Caitlin was affected by the S.T.A.R. Labs particle accelerator, giving her cryokinetic abilities. Since then, Caitlin cut off all ties to her past life and began calling herself "Killer Frost".

She is first seen attacking thieves who have stolen gold worth two million dollars from the Central City Royal Bank. Claiming that the town belongs to Zoom and those he deems worthy enough to enforce his will, she throws a icicle into the thugs' stomach, killing him. She gets rid of the other heister by kissing him, thereby freezing his entire face. She is then informed by her husband Ronnie Raymond that breachers have entered their world. Killer Frost claims that her favourite activity is killing people from other earths and the two set out to kill the breachers.

They hunt down Barry, who has taken the identity of his Earth-2 counterpart, to a café. They demand to know who of the guests is the breacher from Earth-1. Nobody gives himself up and Iris, the wife of Earth-2 Barry, draws her gun to arrest Killer Frost and Deathstorm. Killer Frost activates her power and Barry tries to reason with her, calling her Caitlin. Killer Frost claims that if he really knew her, he would know that she hates the name Caitlin and lunges icicles at him and Iris. Barry saves them by using a table as cover. Barry then uses his speed to grab Killer Frost and Deathstorm and brings them into a park in Central City. They continue their fight and Barry cleverly reflects Deathstorms fireblast onto Killer Frost. Deathstorm grabs her and flies off with her, claiming that their battle isn't over.

After the police department has been tipped off about Killer Frost's and Deathstorm's hideout, Iris, her partner Lawton and Cisco head there only to be disarmed by Killer Frost. Reverb then appears, revealing himself as the employer of Killer Frost and Deathstorm as well as Cisco's Earth-2 doppelganger. Reverb offers Cisco to reign Central City by use of their powers but Cisco turns down Reverb's offer. The Flash arrives and knocks down Reverb. Iris then takes her gun and shoots Killer Frost in the shoulder, causing Deathstorm to viciously attack his opponents. While Barry evades him, he is shot in the back by Reverb. Reverb and Deathstorm then both attack the weakened Barry, who is merely able to dodge their blows. Killer Frost urges both men to stop, as Zoom has ordered them to keep every speedster they encounter unharmed. The same moment, Zoom appears behind Deathstorm and kills him for disobeying him. Killing Reverb as well, Zoom then turns to Killer Frost, claiming that he's glad at least one of his henchmen knows where his loyalties lie. Zoom then leaves with Barry, leaving Deathstorm's and Reverb's corpses behind. Killer Frost drops to the ground in grief. After realising that Deathstorm is truly dead, she flees from the scene.

To find out where Zoom keeps Barry, Wells and the rest of his crew track down Killer Frost to show then the way to Zoom's lair. Though she is initially uncooperative and attacks, Cisco manages to convince her to aid them by reminding her of her love to Ronnie, who Zoom took away from her. Killer Frost leads them to Zoom's lair, a cave in the middle of a upright cliff. By use of her power Killer Frost creates footholds for the group to climb. Inside the lair, Killer Frost freezes the chain holding Wells' daughter. When the group is confronted by Zoom, Caitlin attacks him, holding him off long enough for Barry and his friends to escape. Although he eventually overpowers her, Zoom does not kill her but locks her up in Jessie's old cell. There she eventually meets her Earth-1 counterpart after Caitlin has been kidnapped by Zoom. She tries to persuade Caitlin to help her break out of her cell, claiming that in return she would help her fleeing from Zoom's lair.

Caitling indeed manages to weaken the cell, causing the glass to shatter. After this, Killer Frost attacks Caitlin, revealing that she never intended to help her. She reveals that Zoom didn't kill her because she looked like Caitlin. To make sure Zoom doesn't need her anymore, Frost lunges a sharp icicle at her, but Zoom speeds in front of Caitlin, catches the icicle and stabs Frost with it, killing her. 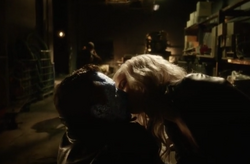 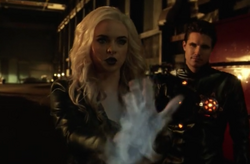 Add a photo to this gallery
Retrieved from "https://villains.fandom.com/wiki/Killer_Frost_(Arrowverse)?oldid=1791496"
Community content is available under CC-BY-SA unless otherwise noted.