Louise Lincoln, also known as Killer Frost, is a supporting antagonist in the 2013 DC fighting video game, Injustice: Gods Among Us.

She is the sadistic and dangerous supervillain in control of the ice and the arch nemesis of Firestorm and an enemy of the Flash. After the Metropolis attack, she joined Superman's regime out of self preservation.

She was voiced by Jennifer Hale, who also voiced Hawkgirl in the same franchise. Hale even voiced Kronika in Mortal Kombat 11.

Louise Lincoln was close friends with Crystal Frost, the first Killer Frost who was killed in her confrontation with Firestorm by nuclear flames. After her death, she became her successor, she replicated the same experiment Crystal went through to become the new Killer Frost.

While she is primarily known for being one of several Firestorm villains, she would do other work in the supervillain business, being a frequent one in the Suicide Squad, in addition to working for other villains in the Injustice League.

Killer Frost appears as a member of the One-Earth Regime working under Superman. She and Solomon Grundy are stationed in Wayne Manor, guarding the Batcave. When Batman arrives at the Manor with the displaced Justice League members he pulled from their dimension, Frost and Solomon Grundy are there to greet them. While Frost duels Wonder Woman with an ice sword, Grundy is beaten by Green Arrow and flown into space by Green Lantern. In response, Frost freezes Wonder Woman solid and fights Green Arrow when he defrosts her, only to be beaten.

Killer Frost is later moved to the Ferris Aircraft facility, where she works on locating the places where the duplicate heroes arrived by searching for anomalies in the space-time continuum. She theorizes that the duplicates were brought in by the Insurgency, bringing her theory to the Regime's Wonder Woman. Diana is initially annoyed by Frost's lack of certainty in her findings, but tells her to have the Flash confirm her theory. Upon turning around, however, Killer Frost finds Wonder Woman with her arms bound with her own lasso and Deathstroke standing over her. He congratulates Frost's "detective work", but tells her it's too late. The two clash and Deathstroke emerges victorious.

Killer Frost later participates in the attack on Gotham City and on the Insurgency's headquarters. She succeeds in freezing Cyborg's arm, then attacks him alongside Solomon Grundy.

In the epilogue, Killer Frost is shown being apprehended and loaded into a prison-vehicle, along with the rest of Superman's accomplices.

Killer Frost possesses the power to generate intense cold and ice, generally manifesting this power in the generation of ice for various uses, such as forming ice spikes to impale enemies, forming weapons such as a sword or throwing daggers. He can use this power for far more dangerous effects, including the flash that freezes the entire bodies of his enemies and traps them in solid ice. Against non-super powerful beings, this is usually lethal for most of their victims.

In addition to generating cold, she can also absorb heat and turn it into cold, which is necessary for her survival. 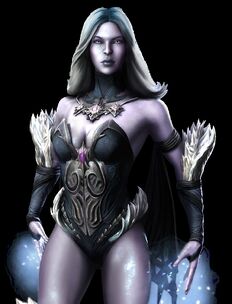 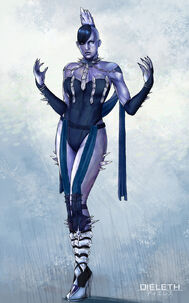 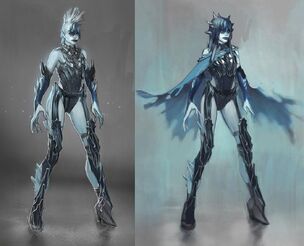