To create an army of moths to take over Jump City.

Use Silkie to attack and take over Jump City (all failed.)

Killer Moth is one of the many major villains in the TV Show Teen Titans. He is the father of Kitten.

He was voiced by Thomas Haden Church, who also played Roach in Tales from the Crypt Presents Demon Knight, Lyle Van de Groot in the George of the Jungle duology, Dwayne LaFontant in Over the Hedge, the Sandman in Spider-Man 3 and Spider-Man: No Way Home, Tal Hajus in John Carter and Quillgin in Regular Show.

Killer Moth first clashed with the Titans as he intended to execute his plan to conquer Jump City with an army of giant mutant moths. His plans were slightly altered, however, as his daughter Kitten, who had just been dumped by her boyfriend Fang, was unwilling to go to her Junior Prom alone and therefore decided to blackmail Robin into accompanying her in order to drive Fang jealous. While attending the ball (with an increasingly jealous Starfire in tow), Robin sent out Cyborg, Raven, and Beast Boy, who discovered Killer Moth's secret laboratory in the basement of his house and were attacked by him, though eventually he, Kitten and Fang were taken down and the mutant moths rendered harmless.

Killer Moth later somehow escaped from jail and fled to a desolate rocky island. Starfire was later forced to abandon a grossly mutated Silkie on this very island, where he was instantly seized by Killer Moth and turned into a giant monster moth, with which Moth proceeded to attack Jump City. Starfire, unwilling to harm Silkie, attempted to persuade him to return to her, and Killer Moth did the same; the stress over two conflicting loyalties caused Silkie to burst, shedding his adult form, and he was retrieved alive by Starfire and became the Titans' official pet. Killer Moth and Johnny Rancid, who had happened to be on the scene, were taken to jail once more.

Killer Moth and Kitten later joined the Brotherhood of Evil in their plan to eliminate young superheroes all around the world. When the Brain executed his plans, Killer Moth and Kitten, along with a swarm of new mutant moths - all of them similarly enlarged as Silkie had been - ambushed Starfire as she attempted to help Argent. Starfire, however, managed to escape, and when the remnants of the Titans assaulted the Brotherhood's base in Paris, Killer Moth and most of the assembled villains ended up as the Titans' flash-frozen prisoners. 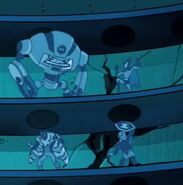 Killer Moth frozen along with other villains