Mutated Hegemoniac
Killer Moth is a major recurring villain from Teen Titans Go!. He is a mutated villainous moth who wants to take over the world, by using toxic acid to mutate other animals. He is the father of Kitten. He is also known for being the original owner of Silkie before he was stolen by Starfire and kept as a pet.

He is voiced by Scott Menville.

In "Missing", Killer Moth put up wanted posters for his lost maggot, offering a large cash reward to anyone who returned Silkie to him. Robin, Cyborg, and Beast Boy knew that Starfire loved Silkie very much but they let their greed get the best of them, so they stole Silkie from her while she was sleeping and returned him to Killer Moth. Killer Moth was very happy to finally have Silkie back and as per request, he gave the boys a check for one billion trillion kazillion dollars. Naturally, the boys went nuts with the money and made tons of frivolous and elaborate purchases with it. After they blew most of their cash, they started to feel bad about getting rid of Starfire's maggot and wanted to make it up to her, by using the last few dollars of their's to buy her a box full of kittens.

Starfire freaked out when she noticed that Silkie was missing and told Raven about it. Raven noted the fliers that she spotted all around town and was quick to deduce that someone returned Silkie to his rightful owner. She assured Starfire that Silkie was incapable of loving her and therefore, did not care that he was being taken away. Starfire disagreed and still wanted to see Silkie again. Raven used a portal to go to Killer Moth's nest to prove to her that Silkie was happier with Killer Moth. When they got there, Killer Moth has happy, caring for Silkie the same way Starfire did.

However, Killer Moth later opened a vat of toxic acid and threw Silkie into it, so that he could mutate him into a giant monster, which would destroy the Teen Titans. Starfire and Raven sprung right into action to stop him but Silkie's mutation turned him into a giant adorable butterfly, capable of speaking English. Silkie was happy, friendly, and energetic and he stated that he loved Starfire, proving Raven wrong. Silkie refused to destroy the Teen Titans, much to the disappointment of Killer Moth, who begrudgingly went back to his room, officially giving up. Starfire and Raven rode off on Silkie and had the time of their lives. They also crashed into Robin, Cyborg, and Beast Boy, causing them to toss the box of kittens onto silkie for the girls to happily play with.

In "Croissant", Killer Moth destroyed Jump City, while riding on a giant pill bug. When the Teen Titans came to stop him, Killer Moth noticed that Beast Boy was missing and was replaced by an ugly little green slug-like monster. Killer Moth pointed out that this looked nothing like Beast Boy and the Titans shamed him for judging "Beast Boy" on his appearance and they told him that looks don't matter. Killer Moth said that he disagreed with this. He said that people have been judging him by his looks his entire life, treating him differently because he is ugly, which is what drove him to become evil. The Teen Titans thought that Killer Moth meant that he should spend his time with "Beast Boy" so they gave the ugly slimy creature to Killer Moth and fled.

Killer Moth made a false distress call to the Teen Titans, leading them to his nest, where he blasted them with a mutation laser beam that turned them into mutants that were just as hideous and disfigured as himself to show them how it feels to be ugly. The Teen Titans cried and whined and barfed into Raven's hood and begged Killer Moth for the antidote, which he refused them and left. 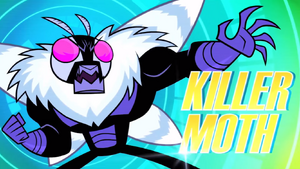 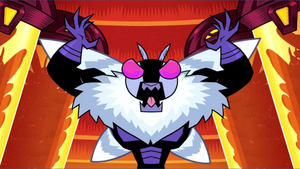 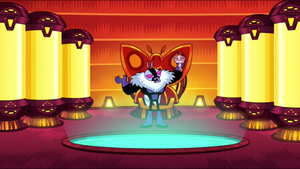 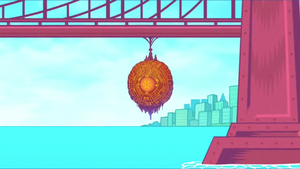 Killer Moth's moth nest under a bridge, which he uses as his evil lair.