Destroy humanity for Gaizok and for fun (failed).

Killer the Butcher is the secondary antagonist in the anime Invincible Superman Zambot 3. Butcher is responsible for sending out the Mecha-Boosts to attack the Earth, particularly Japan. Butcher is a rather eccentric villain and is seen constantly indulging in luxuries, be it eating endless amounts of meat, trying on jewelry, or attempting to sunbathe despite being inside of the Bandok. However, this extravagance does not make him any less ruthless. Butcher was sent by Gaizok to kill the humans, and that's exactly what he plans to do. Butcher's headquarters is the powerful mobile fortress, Bandok.

Killer the Butcher is the childish, cruel, sadistic, demented but cunning commander of the alien army ruled by the cosmic entity Gaizok, a supercomputer created by unknown beings with the goal of finding and destroy creatures with evil intent in the galaxy. The series begins with Gaizok's forces attacking the Earth after following the Jin family, the last survivors of a planet previously destroyed by Gaizok, who came to hide and live on Earth. Killer the Butcher is put in charge of the Gaizok's forces tasked to destroy human civilizations either through brutal acts of terrorism or by using the giant monsters Mecha Boosts, as Gaizok decided that humans are too corrupt to live.

Originally, Killer the Butcher was a barbarian that roamed around the universe, however, he was eventually hired by Gaizok to assist them in wiping out species they deemed evil. Eventually, Gaizok set their eyes on the planet that the Jin Family's ancestors came from and destroyed it, thus forcing them to go to Earth. Eventually, Gaizok targeted Earth and had Butcher to send Mechanical-Boosts to attack Earth from outer space, however, the Mechanical-Boosts Butcher sent were destroyed by Kappei, Uchuta and Keiko in their Zambot 3 one by one.

At some point, Butcher decided to land the mobile fortress Bandok on Earth, he kidnapped some officials that tried to do a truce and tied them on a balloon, who Butcher used as "target practice". As Butcher shot arrows to the balloon to destroy it, causing official tied on it to fall to their death. However, this cruel action would give the Jin Family a chance to attack Bandok, damaging it and forcing Butcher to retreat. He was then punished by Gaizok.

After sending more Mechanical-Boosts, Butcher landed the Bandok at the bottom of the ocean, using it as the facility to implant bombs into humans he had captured and then releasing them. Butcher then had the bomb activated, killing many innocents as a result. This also lead to the death of Kappei's friend named Aki. Eventually, the Jin Family discovered the Bandok's location and attacked it. Butcher then sent the Mechanical-Boosts Gaidar to attack the Zambot 3. The Gaidar was easily defeated, and Kappei threw the damaged Gaidar to the Bandok, damaging it and forcing Butcher to retreat back to space.

The Bandok was then chased by the Jin Family, as they decided to destroy it when it was damaged. When Kappei's grandmother and grandfather sacrificed themselves by throwing themselves into the Bandok. Gaizok sent Butcher to battle in the head of Bandok, with Deathcain and Helldyne, eventually, Kappei fired the Ion Cannon into the cannon of Bandok, destroying it. With the smoke cleared, it was revealed that Butcher was a cyborg. He asked why Kappei fought against him, after Kappei told him that it was because Earth is his home, Butcher taunted Kappei that Earth was destined to be destroyed before finally dying for good as he violently exploded. 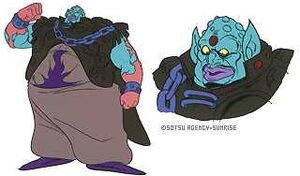 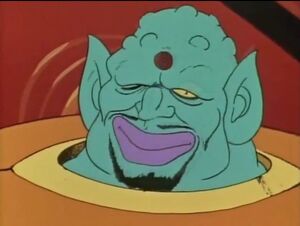 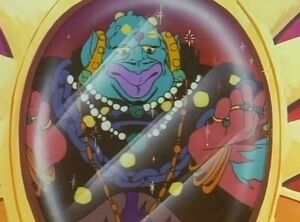 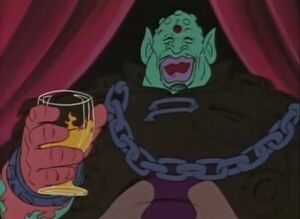 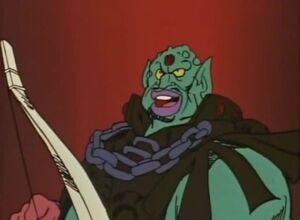 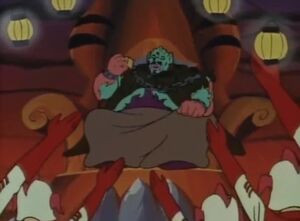 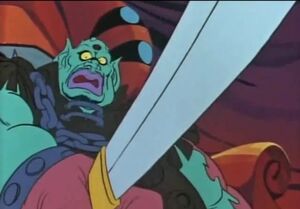 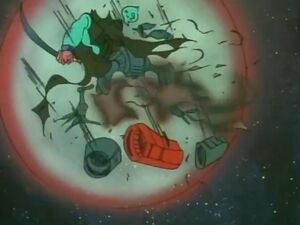 Butcher's demise.
Add a photo to this gallery
Retrieved from "https://villains.fandom.com/wiki/Killer_the_Butcher?oldid=3838264"
Community content is available under CC-BY-SA unless otherwise noted.