Be the most dangerous bull (succeeded)

Killgore is the main antagonist of the Cyanide and Happiness short of the same name. He is an untamable bull who can somehow break the laws of physics and reality, acting like a glitching computer model that exists on the physical plane.

In the short, a successful rodeo bull rider named Clive McFlogin is next in line to attempt to ride Killgore. His wife informs him that Killgore is one of the deadliest bulls, but he goes along with the ride anyway.

After he mounts the bull, Clive sees the rodeo clown wearing a suit of armor jump and cower in a spiked barrel, clearly terrified. When the announcer exclaims Killgore's name, a large portion of the audience flees.

Killgore then breaks out of the gate and immediately rushes forward, then rockets straight up into the sky. Clive holds on as Killgore turns himself upside down and plummets back to the ground. He stops just short of the dirt and begins flailing. He then begins to glitch, stretching and warping its body in an attempt to throw Clive off. He hits Clive a few times with his horns (which phase through his body), then rushes around the perimeter walls of the stadium. He then proceeds to levitate and begin spinning midair, requiring Clive to crawl across his back and stomach to stay on. He then simply phases through the ground, leaving his rider on the dirt.

However, he reemerges from the ground and begins spinning his head and horns in a drill motion, coming at Clive. The rodeo clown jumps out of the barrel and attempts to lasso Killgore, but is bulled in and shredded. Killgore then approaches Clive, who cowers and looks away. However, Killgore simply sniffs him, then takes off into the sky again. Clive looks out to his wife and daughter in the bleachers right before Killgore returns and begins furiously and repeatedly crushing Clive to the ground.

Later, in the hospital, it is shown that Clive survived, but has been somehow infected and is uncontrollably glitching and warping himself.

Though without any lines of dialogue or backstory, it can be seen that Killgore is aggressive and powerful, beyond that of a normal bull. He does everything to buck Clive off and also hurt and/or kill him at the same time. It can be assumed that he is wrathful and hot-tempered just like most rodeo bulls.

Killgore is a computer-generated model of an albino bull, with white-pink skin and fur. He has light pink hooves, horns, and snout, along with even lighter pink scars on his face and body. He also has two glowing red eyes and a small pink tail. 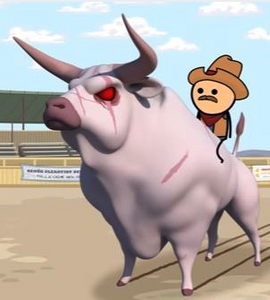 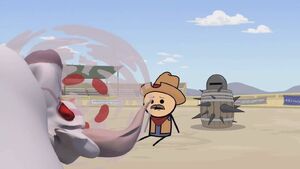 Clive's infectuous glitching.
Add a photo to this gallery 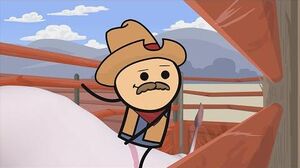 Killgore - Cyanide & Happiness Shorts
Add a photo to this gallery

Retrieved from "https://villains.fandom.com/wiki/Killgore_(Cyanide_and_Happiness)?oldid=4276352"
Community content is available under CC-BY-SA unless otherwise noted.