Killian is the main antagonist of Blue Sky's 13th animated feature film Spies in Disguise. He is Lance Sterling's archenemy and a terrorist mastermind with a cyborg left arm.

Killian was once a loyal leader to all of his underlings until the Kyrgyzstan attack caused by Lance Sterling. The fact that his minions were killed off and his disfigurement was what ultimately caused him to become Lance's archnemesis. He let his grief transform him into an arrogant, greedy, merciless, remorseless, and terroristic criminal mastermind. He has no regard or care for how many lives he costs in order to get what he wants. He holds a hateful grudge against Lance Sterling for the incident that left him crippled with half his face intact and replaced with robotics. He is also shown to be quite a sly man, as he is able to make his robotic face become a holographic of Lance's, framing his enemy in the process.

Killian is a tall man with black hair, thick black eyebrows, and pale blue eyes. He wears a dark gray double breasted suit, a navy blue shirt, and has a cyborg claw in place of his left hand and a cyborg eye on the left side of his face.

In one of HTUV (Honor, Trust, Unity and Valor) agent Lance Sterling's past missions, the former killed Killian's crew of terrorists in Kyrgyzstan. During that mission, Killian lost his left eye and arm, which eventually leads him to have them cybernetically enhanced.

Years later, plotting his revenge, Killian arrives in Japan to buy a weaponized attack drone from Japanese arms dealer, Katsu Kimura. Killian then makes a holograph of Lance's face over his own, causing Lance to be marked as a criminal by the HTUV with agent Marcy Kappel determined to turn him in. Lance barely manages flees the agency to the house of Walter Beckett (the same weapons dealer that he fired after criticizing his bizarre gadgets). 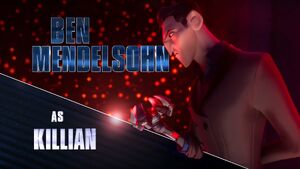 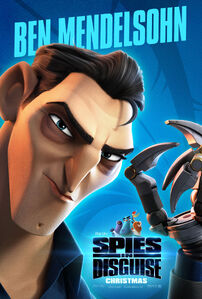 Retrieved from "https://villains.fandom.com/wiki/Killian?oldid=3602060"
Community content is available under CC-BY-SA unless otherwise noted.