Killjoy the Clown is a minor antagonist in the Rooster Teeth animated webseries Nomad of Nowhere. He is a circus clown who works for Bailey Twindleweed and a member of Twindleweed's Phenomenal Four.

While not much is known about Killjoy's past, Twindleweed does reveal that he and the other members of the Phenomenal Four are ex-bounty hunters.

The real Nomad tries to disguise his face using cotton candy as a beard, but is picked randomly from the crowd to join Twindleweed in the ring, where he shows of a puppet Nomad that is then thrashed by Twindleweed's Phenomenal Four, with Killjoy blowing it up with a confetti-filled barrel. However, when Twindleweed forces the Nomad to applaud, he accidentally uses his magic and brings a popcorn bucket to life, tipping off the circus, Skout, and Toth to his being there. The Phenomenal Four capture the Nomad, with Killjoy inflating a balloon around his waist to carry him to the lizard cage, where Trixie shoots him down and into the cage.

Toth and Skout come down and attempt to negotiate a trade in exchange for a reward, but Twindleweed wants the reward all to himself and refuses a trade. As he and the others are arguing with Toth, the Nomad manages to escape by befriending the lizard. Twindleweed tries to get the Phenomenal Four to capture him again, and Killjoy fashions nunchucks out of balloons to attack him. However, the Nomad simply fires a canon at him, hitting the others and launching them far into the sky.

Toth and Twindlewood both try to capture him, but the Nomad notices money under Twindleweed's top hat. When the Phenomenal Four land, he brings the hat to life and makes it jump off of Twindleweed's head, revealing a stash of money; profits from the circus that he had been hiding so he did not have to share with his performers. Killjoy and the other performers angrily grab Twindleweed, stuff him into a canon, and fire him into the sky. The Phenomenal Four tell Toth and Skout they do not want the Nomad anymore, but the last canon firing brings the tent down on top of them.

Killjoy is very enigmatic, as he never speaks and communicates only by honking his clown nose. He is shown to be loyal to Twindleweed, but only up until Twindleweed's treachery is revealed. He seems to be sadistic and cruel as well, as he constantly bears his unsettling grin even while fighting, only frowning when he intends to duel the Nomad one-on-one. 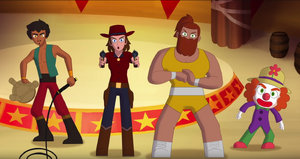 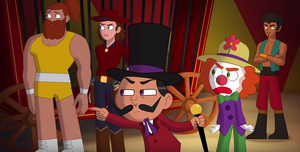 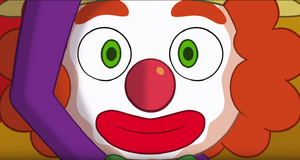 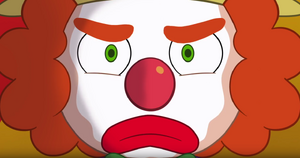 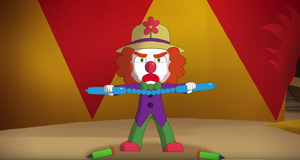 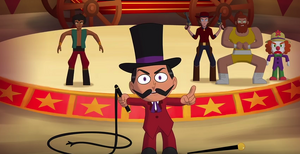 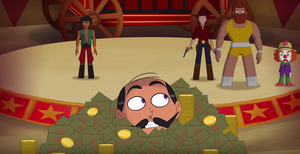 Killjoy learning of his boss' treachery. 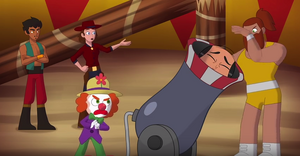