Cubix: Robot for Everyone

Take control of Dr. K's robots and plan to destroy all humans so robots could rule the world.

Kilobot is a vampiric robot who is the central antagonist of the second season of Cubix: Robots for Everyone. He is far smarter than any of his cohorts, and is Dr. K's finest creation. Developed to absorb data from other robots, and be Cubix's new arch-enemy, Kilobot's name comes from the fact that he has the potential to copy the powers of up to 1000 other robots. As such, his power is potentially unlimited. He downloaded the data of 53 robots to his EPU (Emotional Processing Unit) during the time he was activated.

Since all of the Solex was absorbed by Cubix, Dr. K had to power Kilobot's Processing Unit|EPU using a lightning strike from a lightning storm. Kilobot originally appeared in a bat-like form, and immediately absorbed Kolossal's data. He then obtained some of Cubix's data and Dr. K then upgraded him to have a bulkier body designed after Cubix's cubes, and gains the ability to transform like Cubix does into different forms.

During the series finale, he took control of Dr. K's robots and planned to destroy all humans so robots could rule the world. He creates the Zombot, a giant robot that can absorb other robots to make them zombots. As part of his plan he merges his own disassembling cubes with Cubix's, fusing himself with him to form "Kilo-Cubix". Cubix breaks free, but gets 'destroyed' by Kilobot's solarix blast. He is defeated when the Zombot is used to absorb his EPU, causing him to permanently shut down. His EPU data is stored in the Core and is used to restore Maximix's EPU data to make him active again after his data was erased by Kilobot.

Flight (Built in mobility): Kilobot's bat-like wings grant him silent flight with swift maneuverability, though in extreme weather conditions, he may struggle to maintain stability and navigation control. Once, he was whisked away by the force of a tornado.

Shape Shifting (Built in Power): When Kilobot is close enough to his target, he unleashes up-to four slim cables from his chest, latching them onto his victim, downloading their physical designs, performance data, memories and powers straight from their E.P.U., and stores them in his own. Once downloaded; he can impersonate his victims likeness, powers and all, (a useful skill for infiltration).

Tentacle absorption cables (built in power): As well as being used for downloading robot data, his cables can also be used as whips (in hasty circumstances).

Configurations (Cubix's Data): Though he failed to copy all of Cubix's physical/performance data; Kilobot downloaded enough to allow himself to separate his body into modular parts and configure into vehicular or turret forms, even when he is disguised as another robot (such as Endurix).

Some of those forms include:

Gauntlet Projectile (Cubix's Data): While capable of copying laser firepower; Kilobot won't hesitate to use his fists for combat. Like Cubix, he can launch his arm gauntlets at foes for long range damage.

Kolossal's Mallet & Tri-pronged Claw (Kolossal's Data): As Kolossal was Kilobot's first victim, he had gained an early muscular advantage and used the brute's weapons against Cubix in their first fight.

Wing Dings (Built in/Adopted Power/Cubix's Data): Like Cubix's modular coverings being used as projectile discs; Kilobot can use the exo-skeleton bones lining his Wings as boomerangs to cause some superficial damage to his enemies.

Chest Blast (Built in/Adopted Power): No stranger to utilizing laser weaponry, Kilobot can shoot blasts, beams or pulses from his chest. The type of laser or firepower can vary. As he grew smarter and more powerful; his accuracy improved too.

Pulse Ring - his arm can use to make ring to shoot it can go super damage any robot even big brute robots and Kolossal.

Teleportation (Endurix's Data): Kilobot can use other robot's powers without even impersonating them. Endurix's Teleporting power is one of the most prominent that he used.

Super Speed (Endurix's Data): Using Super Speed stolen from Endurix; Kilobot's mobility can be accellerated to a near motion blur, leaving his opponents not knowing where he will strike from next.

In addition, there were at least 35 other unknown robots that were absorbed by Kilobot. 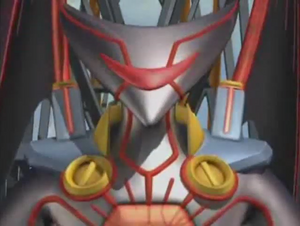