Orchestrate terrorists to set WMDs (Weapons of Mass Destruction) in every country in the world.

Set the WMDs off to destroy every country in the world, so he can turn them into third world countries and unleash the true nature of humanity.
Kill Team America.

Kim Jong-il is the main antagonist of the 2004 film Team America: World Police.

He was the former dictator of the Democratic People's Republic of Korea, as well as a criminal mastermind, terrorist leader and Team America's arch-nemesis, who aims to turn every country into a third world country and bring chaos upon the world. Due to the many controversies in his real-life rule, Jong-il was the continual target of parody and satire, one of the most famous examples of which is this version. In real life, Jong-il produced and tested nuclear weaponry while North Korea's economy was dissolving and the country's population suffered a famine.

He was voiced by Trey Parker, who also played Balthazar Bratt in Despicable Me 3 and Eric Cartman in South Park.

A spoof of popular puppet shows such as Captain Scarlet and the Thunderbirds Team America merged the usual shock-humor and wit of its South Park creators with political satire to create a fictional world based on (and ridiculing) recent world history.

In the alternative world of Team America: World Police, Jong-il is a secret supporter of a vast terrorist network and sought to incite World War III (also known as Armageddon) — he believed that only the strong deserved to live and that he would be doing the world a favor by causing mass death and destruction.

After Team America destroys both Paris and Cairo in their attempts to stop terrorists, the Film Actor's Guild (FAG) publicly condemn the team's actions, saying that their actions would just make new enemies. Out of spite, terrorists from Dirkdirkistan blow up Panama Canal, angering Jong-il as it was still too early to blow up entire cities. This does, however, create discord among Team America when Gary, the newest member, quits after seeing what he has done. The rest of the team also let their personal feelings get in the way, leaving them open to an attack from both Dirkdirkistan and North Korea. Team America is then captured and imprisoned within Jong-il's palace.

Jong-il gains the help of FAG in organizing a peace ceremony that will bring the world's leaders in one space, leaving their nations completely exposed. He reveals to Team America that he has spent many years planting bombs in all the major capitals in the world, waiting for this moment when he can finally cause mass panic.

Although he came close to achieving his goals, Jong-il was defeated and killed in a confrontation with Team America — only for it to be revealed (undoubtedly for comedic effect) that he is actually an alien cockroach. Exposed as an alien, Jong-il, who is mad that his plan has failed, proceeds to fly off into space in his small spaceship, swearing to return some day and plan revenge against Team America.

In many ways, Kim Jong-il is similar to Cartman, both being very loud, profane, manipulative, insecure, and having the same voice actor.

He shows absolutely no remorse for humanity, shooting his translator just to scare one of his henchmen. He is narcissistic as well, adorning his palace with pictures and statues of himself, along with having North Korean performers sing about himself. He can be charismatic when he needs to be, gaining the support of the Film Actor's Guild to help him take over the world.

However, it was also revealed (through a now-famous song) that this version of Jong-il was also driven to his intense hatred of humanity because of an immense feeling of loneliness and rejection, which resulted in him developing a multitude of personality disorders. 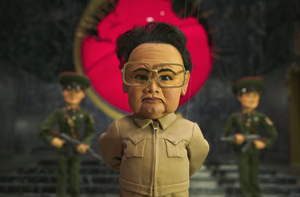 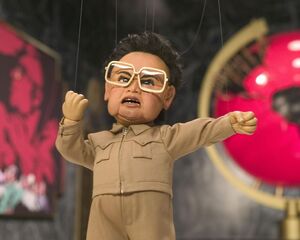 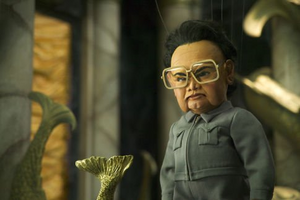 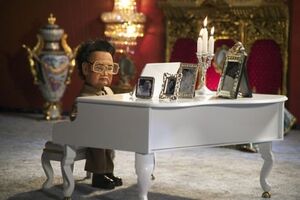 Jong-il during "I'm So Ronery" 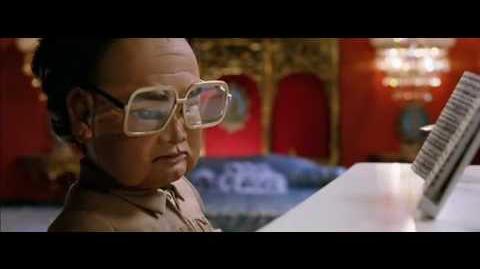 Retrieved from "https://villains.fandom.com/wiki/Kim_Jong-il_(Team_America:_World_Police)?oldid=3341476"
Community content is available under CC-BY-SA unless otherwise noted.