Head of a nuclear weapons program

Leadership through reign of terror

Trickery
Control over North Korea and its various nuclear weapons

Partying.
Drinking.
Playing with a tank and shooting it.
Forcing people to worship him through media.
Watching American television.

Destroy South Korea and the United States with nuclear weapons should they refuse to worship him.

Kim Jong-un (Korean/Chosŏn'gŭl: 김정은, Gim Jeong-eun) is the main antagonist of the 2014 film The Interview. He is based on the real-life dictator of North Korea with the same name.

He was portrayed by Randall Park.

He was the dictator of the isolated Democratic People's Republic Of Korea and commenced the development of strong nuclear warheads. Kim intended to televise an interview with Dave Skylark to deceive his enemy countries into thinking that even such a popular and well-admired celebrity like Skylark can find Kim as a friend. The purpose of the interview was to manipulate countries opposed to dictatorship into worshiping and seeing Kim as a god, so that they will end up like the brainwashed North Koreans.

Dave interviews celebrities about personal topics and gossip. After Dave and his crew celebrate their 1,000th episode, they discover that Jong-un is a fan of Skylark Tonight, prompting Aaron to arrange an interview.

Aaron travels to rural China to receive instructions from Sook-yin Park, a North Korean propagandist, and Dave accepts the task of interviewing Kim. After a night of drugs, sex and partying, the next day CIA Agent Lacey (Lizzy Caplan) proposes that Dave and Aaron assassinate Kim using a transdermal strip that will expose Kim to ricin via handshake. Skylark and Rappoport protest that killing Kim won't solve the issue about the nuclear weapons, but Lacey claims she is confident that Kim's death will facilitate a coup d'état. Upon their arrival in North Korea, one of Kim's bodyguards discovers the ricin strip and chews it, believing it to be gum. Lacey airdrops two more strips from an UAV and Aaron smuggles them into the palace. Dave spends the day with Kim, playing basketball, showing Dave a Soviet Union tank that was handed to Kim Il-Sung by Joseph Stalin apparently during the Korean War, spin-the-bottle, limbo, and partying. Kim persuades Dave that he is misunderstood, and they become friends.

While driving a tank, Dave discovers that Kim loves the song "Firework" by Katy Perry. At dinner, the bodyguard exposed to ricin has a seizure and inadvertently kills Kim's other bodyguard before dying. The next morning, Dave feels guilty and discards one of the ricin strips, then thwarts Aaron's attempt to poison Kim with the second strip. After a dinner mourning the death of Kim's bodyguard, Dave discovers Kim's malicious character and that the nearby grocery store is merely a facade. Aaron and Sook confess their attraction to each other and Sook reveals she despises Kim claiming that she expressed sympathy for the North Koreans who are starving, being tortured or have been killed. Sook then lectures to Aaron and Dave that killing Kim won't change anything (ironically, Aaron and Dave already thought of this earlier in the movie) and then Sook proves that Agent Lacey is wrong, that killing Kim would only provoke one of his brothers or generals to take his place and continue using North Korea's military and nuclear bombs to antagonize innocent lives.

Dave, Aaron, and Sook form a plan to break Kim's cult of personality by making him cry on air. Sook claims that once the North Korean people realize that Kim Jong-un has lied to them and is not a biologically superior entity, then they will stop respecting and worshipping him so much.

During the internationally televised interview with Kim, Dave at first tricks Kim at the beginning into thinking that the interview will be about praising him and asking positive questions. However, the first question was why Kim allows North Korea to starve, to which Kim at first lies that North Korea has a good abundance of food, but Dave reveals that he saw for himself the grocery store was all fake. This causes mayhem in the control room as Sook and Aaron are forced to fight the three broadcasters (with one being particularly the most violent). Kim angrily blames that the United States of America's economic sanctions will not allow him to have any power to feed his people but still asserts he did his best to feed them in spite of the imposed sanctions. Dave only then goes to a new question about why Kim tortures his own people through detention camps.

Due to some key points he brought up during the unheard and unseen parts of the interview, Kim has now overturned the conversation, but when Dave sings "Firework," as well as mentioning that he misses his dad (Kim Jong-il), Kim cries uncontrollably and soils himself, ruining his reputation. Sook and Aaron seize control of the broadcasting center and Sook uses a machine gun to mow down the guards sent to kill the broadcast. Kim shoots Dave, who survives due to a bulletproof vest under his shirt. Dave, Aaron and Sook regroup and escape the presidential palace, but soon run into the soldiers still not convinced that they stop being loyal to their dictator. A defecting general shoots the soldiers dead and helps the three escape and hijack Kim's tank in order to get to their pickup point. Right after throwing a tamper tantrum about the interview and rectally assaulting a general who made him even angrier about it, Kim boards a helicopter and pursues Dave, Aaron and Sook with the military firing at the tank. He orders that North Korea's nuclear missiles be prepared for launch, but before he can issue the command for them to fire, Dave fires from the tank at the helicopter. The distraught Kim can only watch in defeat as the missile rips through the helicopter's cockpit, causing it to explode and obliterating the disgraced dictator before it crashes behind the tank, effectively putting an end to North Korea's tyranny and the nuclear threat, since Kim did not finish the command before dying, making the operator terminate the launch.

While Aaron and Dave chose to go back to the United States, Sook ran back to Pyongyang to take over the throne and turn North Korea into a denuclearized democracy. Most likely, the United States lifted the sanctions and the villagers are now able to eat. 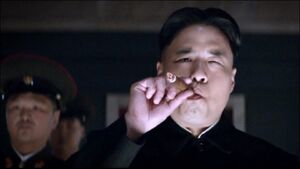 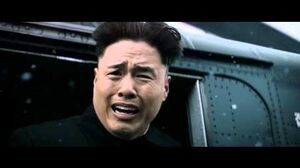