Chimairamon (in the Japanese version)

Destroy the DigiDestined and lay waste to the Digital World.

Destroy the Digimon Emperor (all failed).

Kimeramon, also known as Chimairamon in the Japanese version, is the secondary antagonist in the first 21 episodes in the anime Digimon Adventure 02. It was an abominable amalgamation that was created by the Digimon Emperor to destroy the Digidestined and conquer the Digital World.

It had no voice actor in the Japanese version, having only monster noises for speech, but in the English version, it was voiced by Tom Wyner, who also voiced Devimon.

Kimeramon is an Ultimate Class Digimon that resembles a hybrid four-armed four-winged creature with various Digimon body parts. It has the head of a Kabuterimon, body of a Greymon, hair of MetalGreymon, arms of Devimon, SkullGreymon, and Kuwagamon, legs of Garurumon, tail of Monochromon, and two sets of wings made from Angemon and Airdramon.

Kimeramon displays very little intelligence, acting out as a dangerous and violent monster that only cares about causing destruction. It started out obedient to its creator, but eventually turned on him due to its unstable nature.

In the English version, it began laughing when Ken tried to order him again, showing signs of a psychopath.

Having been created from the parts of several powerful Digimon, Kimeramon is incredibly powerful itself. It has an invulnerable body, monstrous strength, four arms and a tail to fight with, and four wings to allow it to fly a great speeds. It's signature attack is its Heat Viper, which can annihilate any foe. It has destroyed several towns, bested the Digidestined on numerous occasions. Ultimately, it took the also incredibly powerful Magnamon, along with Wormmon's sacrifice, to finally defeat it.

Davis and Veemon discover a powerful Golden Armor thanks to Wormmon, and Veemon Golden-Armor Digivolved to Magnamon. Even with the power of the Golden Digi-egg, Magnamon was able to do some damage to Kimeramon. Kimeramon then betrays Ken, turning against his own master and attacks him. After Ken’s floating ship goes down, Kimeramon captures Magnamon in an attempt to crush him, Wormmon rescues Magnamon, freeing him from the wicked beast’s grasp. Kimeramon then smacks Wormmon away, and Wormmon nobly uses his remaining energy to Magnamon, sacrificing himself. Magnamon manages to finally defeat Kimeramon, obliterating the creature with his Magna Explosion (Extreme Jihad) attack.

Despite being obliterated, Kimeramon manages to survive, though barely, and meets a dying Machinedramon, they DNA digivolve to form Millenniummon.

A Synthetic type Digimon that is a composition of various Digimon; each part of his considerable being, such as his hands, feet, body and tail, are made up of the corresponding Digimon's parts. It's a mystery as to why such a composition was made. Some say that, as Machinedramon is composed of various metallic Digimon and that Kimeramon is composed of various flesh-and-blood Digimon, he was made as either a prototype of Machinedramon or as an anti-Machinedramon warrior, but the truth is not yet elucidated. Despite all of this, though, he bears a dreadful and combative instinct; Kimeramon's powerful destructive powers have not been matched as of yet. His special attack is "Heat Viper", a heat ray of death spewed from his mouth. This terrible attack, once the heat ray has hit a victim, it is powerful enough for the enemy to be deleted, and many have dubbed this attack "Kimeramon's Spell". 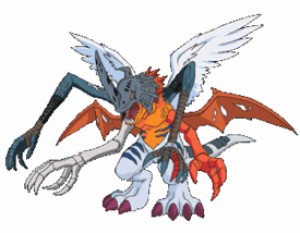 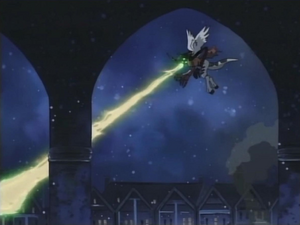